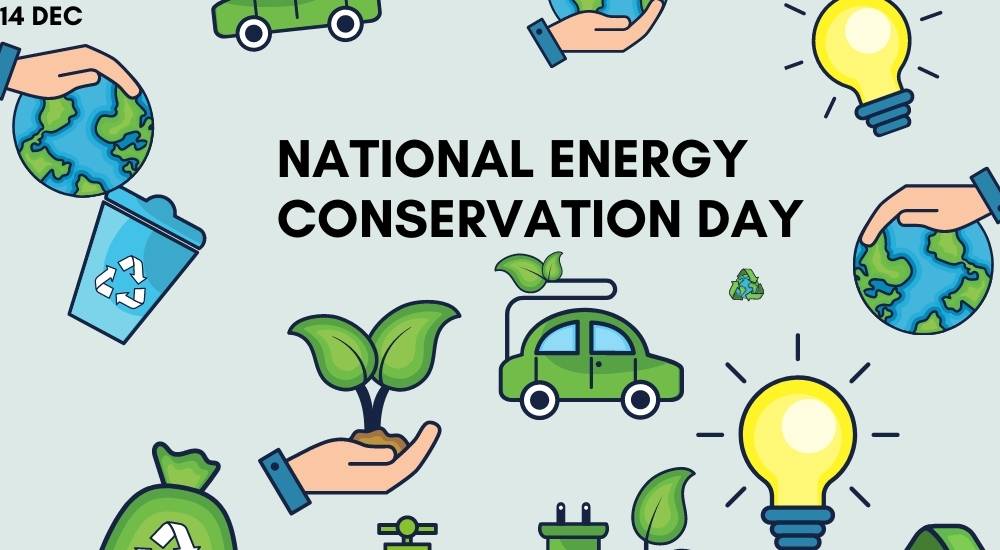 Every year, National Energy Conservation Day is celebrated on December 14 to generate awareness among the general people in India about global warming and climate change and promote efforts towards saving energy resources.

It focuses on educating people on reducing energy waste and how the masses can do their part in conserving natural resources. Essentially, the primary objective of the day is to minimize the use of energy and to encourage people to use it efficiently.

In addition, proposals for alternative energy sources are addressed at this event. States and organizations in the nation renewed their commitment to a sustainable and energy-efficient future with new environmental projects and awareness campaigns.

Apart from this, in 2001, the Union Ministry of Power founded another government organization named the Bureau of Energy Efficiency (BEE) to reduce excessive consumption of energy.

Since1991, December 14 has been celebrated as Energy Conservation Day by the Bureau of Energy Efficiency (BEE). A constitutional body that is led by the Government of India, the Bureau of Energy Efficiency supports the development and implementation of plans and directives for better energy efficiency and protection. The committee also executed ‘The Energy Conservation Act’ in 2001.

India is the second world’s largest consumer of electricity, using over 130.35 billion units of energy annually. Electricity consumption in India increases by about 2 per cent annually. The country is known for running mainly on coal but has also shifted to natural gas and renewable energy sources in recent years.

By 2030, buildings are predicted to consume the most electricity, making energy efficiency in buildings essential to India’s transition to sustainable energy. By 2032, it is expected that the demand for electricity in the residential and commercial building sectors would have multiplied by 5 and 3, respectively.

In the end, it can be concluded that our experts are working to find and develop new, alternative energy sources. But it is our responsibility to understand the importance of energy and become aware of energy conservation. And energy conservation day provides us with an opportunity to think about it, and we should always try to not waste energy.

Various events, workshops, and webinars are organized on this day by the Bureau of Energy Efficiency (BEE) to make people aware of the importance of the conservation of energy and encourage them to use efficiently and use less energy for a particular constant purpose such as switching off lights and fans when not being used.

If you are not switching highly consumable bulbs to energy-efficient bulbs, this is the right day to replace your light bulbs. Educate a child about the 3 R’s – Reduce, Reuse, Recycle. Participate in campaigning and advocacy for resource conservation.

The Awards were presented for the first time on December 14 1991, which is observed as “National Energy Conservation Day” around the nation. Eminent Indian dignitaries present these Awards to various economic sectors on December 14 each year to honour their outstanding contributions to energy conservation in the nation.

(I) “Look deep into nature, and then you will understand everything better.” – Albert Einstein
(II) “A true conservationist is a man who knows that the world is not given by his fathers, but borrowed from his children.” – John James Audubon
(III) “Our dependence on fossil fuels amounts to global pyromania, and the only fire extinguisher we have at our disposal is renewable energy.” – Hermann Scheer

(IV) “The truth is, as most of us know, that global warming is real and humans are major contributors, mainly because we wastefully burn fossil fuels.” – David Suzuki
(V) “Fire made us human, fossil fuels made us modern, but now we need a new fire that makes us safe, secure, healthy and durable.” – Amory Lovins
(VI) “Nature provides a free lunch, but only if we control our appetites.” – William Ruckelshaus

(VII) “Let’s nurture nature so that we can have a better future.” – Anonymous
(VIII) “I feel more confident than ever that the power to save the planet rests with the individual consumer.” – Denis Hayes
(IX) “Earth provides enough to satisfy every man’s needs, but not every man’s greed.” – Mahatma Gandhi
(X) “What we are doing to the forests of the world is but a mirror reflection of what we are doing to ourselves and to one another.” – Chris Maser