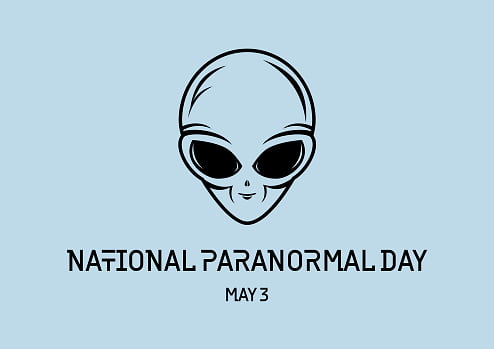 Do you believe in Ghosts?  Whether you are a psychic or Skeptic, National Paranormal Day is for you. So, take out your Ouija board, and let’s start communicating with something beyond.

Seeing is believing, generally we humans don’t believe in something until we witness it with our eyes, or heard an adage. But is it true? Of course, not in all cases, because there are many things that exist in this world but still, we can’t see like Air, Sound, transmission signals, etc.

There have been millions of people around the globe, who witnessed or came into direct contact with or experienced something beyond the norm. Also, there is no solid evidence for these oddities things so science can explain them.

Ghosts, UFOs, Visitations, and Chupacabras are things that have been in debate for many years. But is it possible that these things, actually exist? And, if not then why have there been so many sightings and close experiences?

Whether you believe in ghosts or not but it’s always fun to spend time exploring the history of the paranormal.

Our universe is full of oddities, dimensions, and great unknowns. More or less the event that cannot be explained by science or logic, is basically classified as Paranormal.

No one knows the origin of National Paranormal day just like any paranormal activity. But definitely, we may find out the truth one day. The only thing we know is it was created in 2013.

Ghosts, Vampires, Bigfoot, and more, there are ever-increasing encounters with the paranormal around the world. Even Déjà vu can be considered paranormal activity.

For thousands of years, People have been sharing their experiences with the Supernatural Phenomenon or some other form of energy that is beyond our science and is impossible to explain. However, the documentation of these reports started only a few 100 years ago.

Also, some people call him the father of the modern paranormal. His compiled reported events to include falls of fishes, frogs, and inorganic materials from the sky, poltergeist events, Teleportation, Levitation, Crop circles, Unexplainable noise, and explosions, Unidentified Flying Objects (UFOs), spontaneous combustions, appearances, and disappearances of mysterious beings.

Most probably, Fort is also the first person to explain the strange appearances and disappearances of humans by alien abduction.

In the entertainment industry, Paranormal activities have been an intriguing genre. In 1959, “The Twilight Zone” set a benchmark for strange occurrences.

The movie “The X-Files” became a cult classic in 1993 after its debut on television. And since then, a lot of movies and series have been made and released in the cinematic world.

How to Celebrate National Paranormal Day

Celebrating Paranormal day is always fun. There are a lot of interesting ways to spend time on National paranormal day.

Apart from these things, you can also Do Some Local Paranormal Research. Simply, explore your city or town, or local area to find out some of the reports about paranormal occurrences.

Most Frequently Asked Questions on Paranormal.

Q. What is National Paranormal Day?

Ans: This day is one that is meant to promote the study of paranormal phenomena and a desire to understand their cause, effect, meaning, and purpose in human life.

Q. When is National Paranormal Day?

Ans: Every year on May 3, it is celebrated.

Q. When was the first National Paranormal Day?

Ans: The first mention of National Paranormal Day on Twitter was in 2009 though, at the time, some people were celebrating the day in August.

Q. Why is National Paranormal Day on May 3?

Ans: It is speculated that Charles Fort, an influential paranormal researcher, died on May 3.

Q. What are the best paranormal films to watch on National Paranormal Day?

Q. What are the most haunted places in the world?

Q. What are some of the world’s biggest unexplained mysteries?

Ans: The Bermuda Triangle, Area 51, the Voynich Manuscript, Jack the Ripper, and Bigfoot are some of the most popular unsolved mysteries.

Beyond Paranormal Day Under Awareness Reads