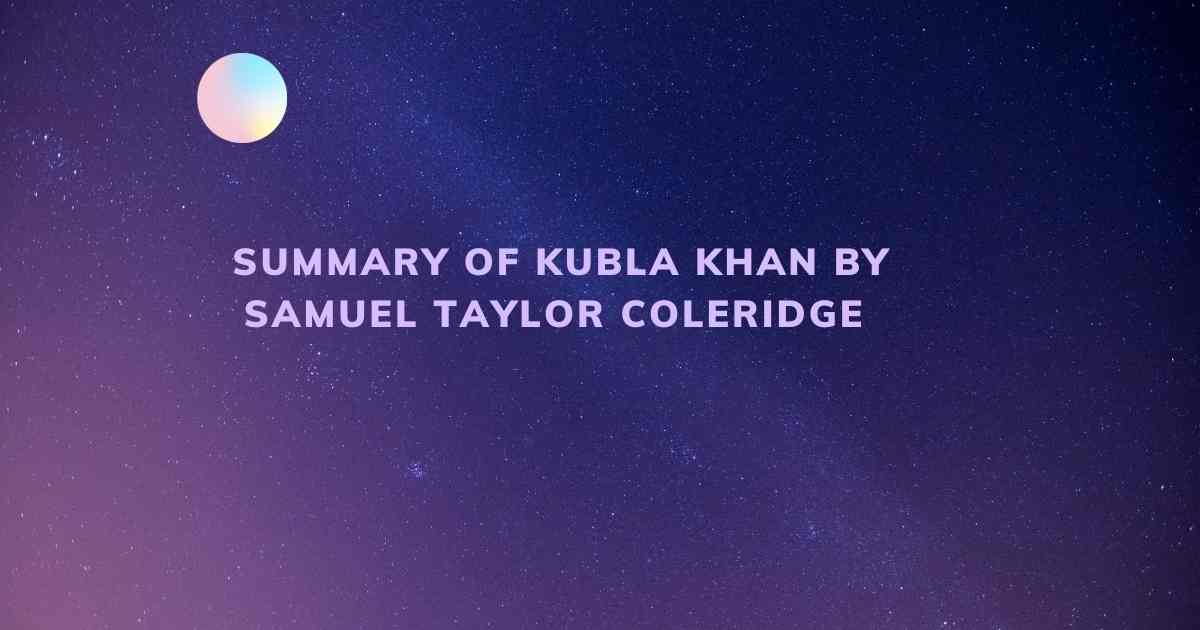 Kubla Khan: or, A Vision in a Dream: A Fragment is a poem, with wide fame. and Coleridge. It was completed in 1797, but published in 1816. According Coleridge’s Preface to Kubla Khan, he said that he composed this poem after a night experienced of Opium-influenced dream after reading a work describing Shangdu.

Samuel Taylor Coleridge (1772-1834) was co-founder of the Romantic movement in England. He did not write much but whatever he wrote is bound in pure gold. His famous works include “Christabel”, “The Rime of Ancient Mariner” and of course, his dream fragment “Kubla Khan”.

Summary of Kubla Khan with Analysis

“Kubla Khan” is one of the Coleridge’s most famous poems. It is counted among the best works of Romantic poetry. The preface of this poem explains that the poet had fallen asleep after consuming a dose of pain-relieving drug and had a fantastic dream in his sleep.

When the poet woke up and wanted to pen down his thoughts, he was interrupted by a “person on business from Porlock” and was unable to finish it. “Kubla Khan” is a true Romantic poem for its style, subject as well as sensibility.

While Romantic promoted imagination, world of nature and fantasy, “Kubla Khan” takes these characteristics a step ahead. Coleridge has created a place of extreme fantasy in his poem. The “sunny pleasure-dome with caves of ice” that he describes at Xanadu creates a sense of awe and mystery.

While on one hand, Coleridge has written about a ‘sacred river’, ‘twice five miles of fertile ground”, “many an incense- bearing tree” and other beautiful aspects of nature; he has also described the ferocious and tumultuous aspects of nature.

Coleridge has mentioned a sunless and lifeless sea, “caverns measureless to man”, “deep romantic chasm”, “rebounding hail” and “Earth’s “fast thick pants”. The poet has mixed the constructive as well as destructive characteristics of Mother Nature in the poem “Kubla Khan”. He writes:

Amid whose swift half-intermitted burst
Huge fragments vaulted like rebounding hail,
Or chaffy grain beneath the thresher’s flail:

The language of the poem is highly formal. Coleridge has paid much attention to sounds that help him create a lifelike image of the landscape. The poet has described origin and path of the sacred river Alph and the picture of his imaginary “pleasure dome”.

Also, the rhyme scheme of the poem is iambic tetrameter and the rhythm increases into almost a chant-like status and aligns with poet’s hyperactive sensations. Noted critic John Browning has appreciated ‘Kubla Khan’ for “its melodious versification”. He considers that the poem ‘is perfect music’.

Talking of any summary of “Kubla khan”; it is a wild dream-poem that manages to place Coleridge as master of creating an account of striking imagination through his verse. The poem builds a thrilling and vivid landscape of the remote and secluded place of Xanadu. The poet describes the gardens and trees and meandering river water.

Coleridge also creates the undefined wilderness of tumultuous chasms, dancing rocks and measureless caverns. Even the forests outside the campus of the palace are as ancient as hills. This forest is opposite of incense bearing trees inside the boundaries of the Palace.

Moreover, the glamorous palace of Kubla Khan, the tumultuous river, the ice caves and the ancestral voices add to the intensity of the poem. The last stanza creates a sensation no less than terror. By including the character of an Abyssinian woman, Coleridge has heightened the supernatural in the poem. The wild scenery that included a waning moon and the deep chasm now has a damsel. He says:

Coleridge has selected Kubla Khan’s empire as the subject of his poem that makes it primitive and removed reality, and is quite appropriate for the Romantic world of imagination. Moreover, the poet has added ample amount of thrill by using River Alph, ancestral voices, Xanadu, Abyssinian damsel, a woman crying for her demon-lover and such other unfamiliar and vague elements in the poem.

So, the Coleridge’s poem Kubla Khan is built on fantasy, mysticism, supernatural and wilderness. In this short summary of Kubla Khan, you find that the poem’s picturesque descriptions of the beauty of nature bring sensuousness into its subject. These elements combined with the rhythmic style of Coleridge’s poetry make “Kubla Khan” a truly romantic poem.

Q. What is the main idea of Kubla Khan?

Ans- Coleridge has created a place of extreme fantasy in his poem. The “sunny pleasure-dome with caves of ice” that he describes at Xanadu creates a sense of awe and mystery. So, the artistic imagination is the important component of the poem.

Q. What is the main theme of the poem Kubla Khan a vision in fragments?

Ans- The main theme of the poem is the Power of imagination.

Q. What does Kubla Khan represent?

Ans- “Kubla Khan” a Representation of a Dream: The poem explores art and romanticism used to paint a dream world. The expression of beauty runs throughout the poem. Coleridge has skillfully applied the “willing suspension of disbelief”, despite knowing that the palace is a dreamland.

Ans- The poem is only considered a fragment because its creator called it so.

Q. What does the end of Kubla Khan mean?

Ans- This poem describes Xanadu, the palace of Kubla Khan, a Mongol emperor and the grandson of Genghis Khan. Toward the end, the poem becomes more personal and mysterious, as the speaker describes past visions he has had. This brings him to a final image of a terrifying figure with flashing eyes.

Q. What are sinuous rills?

Q. What does Kubla Khan describe and what does it mean?

Ans- Coleridge has selected Kubla Khan’s empire as the subject of his poem that makes it primitive and removed reality, and is quite appropriate for the Romantic world of imagination. Moreover, the poet has added ample amount of thrill by using River Alph, ancestral voices, Xanadu, Abyssinian damsel, a woman crying for her demon-lover and such other unfamiliar and vague elements in the poem

Beyond Summary of Kubla Khan Under Literature