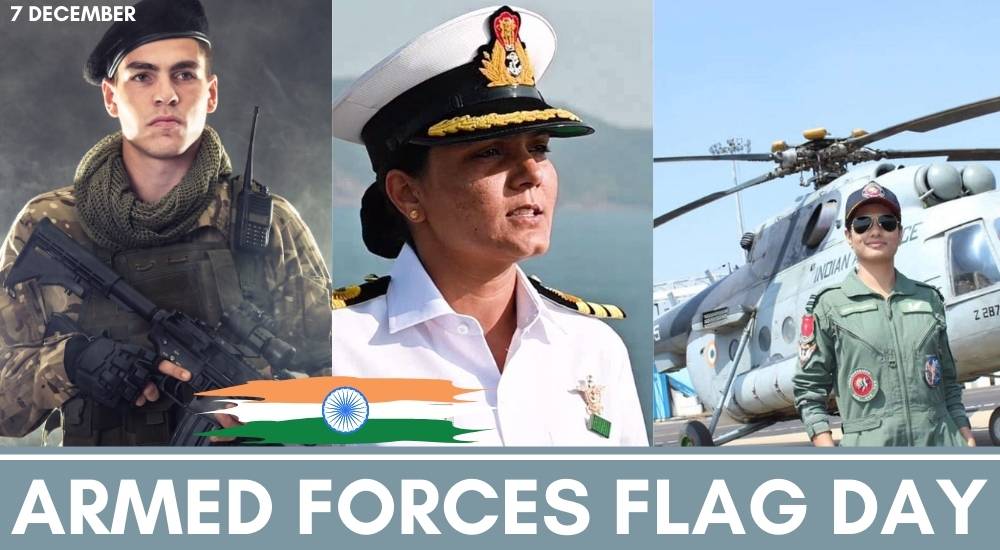 Every year, Armed Forces Flag Day is celebrated on 7 December across the country. The day is committed to honouring our martyrs, and recognizing the efforts of personnel who tirelessly fight on our border to protect the honour of the country, and enhance national security.

Since 1949, 7th December has been celebrated as the Armed Forces Flag Day throughout the nation to collect funds from the people of India for the betterment of the Indian Armed Forces personnel. To honour the Indian soldiers, sailors, and airmen, it has become a tradition to celebrate this day.

The day provides civilians with an opportunity to figure out their responsibilities to take care of the families and dependents of the armed forces, who sacrifice so much for the welfare and security of the entire nation.

Immediately after India gained independence, a necessity arose for the government to manage the betterment of its defence personnel. On August 28, 1949, a committee was led by the defence minister and decided to observe December 7 as a Flag Day annually.

The reason behind celebrating Flag Day was to hand out miniature flags to the public and raise money in exchange. Flag Day achieved more importance as it considers that it is the responsibility of the civilian population of the nation to take care of the families and dependents of the armed forces personnel who protect the country’s honour.

People throughout the nation give away tiny flags and car flags in red, deep blue and light blue, representing the three services in return for money. Therefore, the monies raised are put to use for the welfare of current and former service members as well as for the rehabilitation of combat casualties.

During the course of winning the wars, in the numerous battles the country has fought as well as in the current fight against cross-border terrorism and insurgency, many courageous and noble warriors from the armed services have sacrificed their lives.

It’s difficult to imagine the trauma that the family experiences when the family patriarch dies. Those of our men who are handicapped need care and rehabilitation so they can live a life of dignity and not burden their families.

Furthermore, there are Ex-servicemen who suffer from serious diseases such as Cancer, Heart ailments Joint Replacement etc. And who are unable to pay for expensive medical care. Therefore, they too require our help and attention.

We celebrate Armed Forces Flag Day for these reasons. On this day, the contributions made by Army, Navy, and Air Force troops are remembered. Every citizen of our nation has a responsibility to ensure the rehabilitation and well-being of the loved ones of our courageous martyrs and disabled service members.

The Indian Army, Indian Air Force, and Indian Navy all organise a variety of shows, carnivals, dramas, and other entertainment programmes on Flag Day to highlight to the general public the efforts made by their armies to maintain national security.

Moreover, to celebrate this day visit the army campaign nearby you. At least, try to contribute as much as you can on this day. Learn more about our brave warriors such as how they live, how they work, and how you can join their group. This year share #armedforcesflagday #armedforcesflagday2022 on social media to spread awareness about the special event.

(I) “The soldier is the Army. No army is better than its soldiers. The Soldier is also a citizen. In fact, the highest obligation and privilege of citizenship is that of bearing arms for one’s country.” – George S. Patton
(II) “The union of hearts, the union of hands, And the flag of our Union forever.”
(III) “The occasion of Indian Armed Forces Flag Day reminds us all that we must thank the Indian armed forces for sacrificing their lives and comforts for us.”

(IV) “We fight to win and win with a knockout because there are no runners-up in war”. – General JJ Singh
(V) “We are safe, happy, and smiling because we have our armed forces taking charge of their duties.”
(VI) “We live by chance, we love by choice, we kill by profession.” -Officers’ Training Academy, Chennai.

(VII) “War is not just the shower of bullets and bombs from both sides, it is also the shower of blood and bones on both sides.” – Amit Kalantri
(VIII) “There is the National Flag. He must be cold, indeed, who can look upon its folds rippling in the breeze without pride of the country.”
(IX) “Only Best of the Friends and Worst of the Enemies Visit Us.” – Indian Army
(X) “An army of sheep led by a lion is better than an army of lions led by a sheep.” – Alexander the Great

Q. Why do we celebrate Armed Forces Flag Day?

Ans: 7 December is celebrated as the Armed Forces Flag Day throughout the nation to collect funds from the people of India for the betterment of the Indian Armed Forces personnel.

Ans: The Indian Army, Indian Air Force, and Indian Navy all organise a variety of shows, carnivals, dramas, and other entertainment programmes on Flag Day to highlight to the general public the efforts made by their armies to maintain national security.

Q. What is the meaning of Armed Forces Day?

Ans: Every year, Armed Forces Flag Day is celebrated on 7 December across the country. The day is committed to honouring our martyrs.