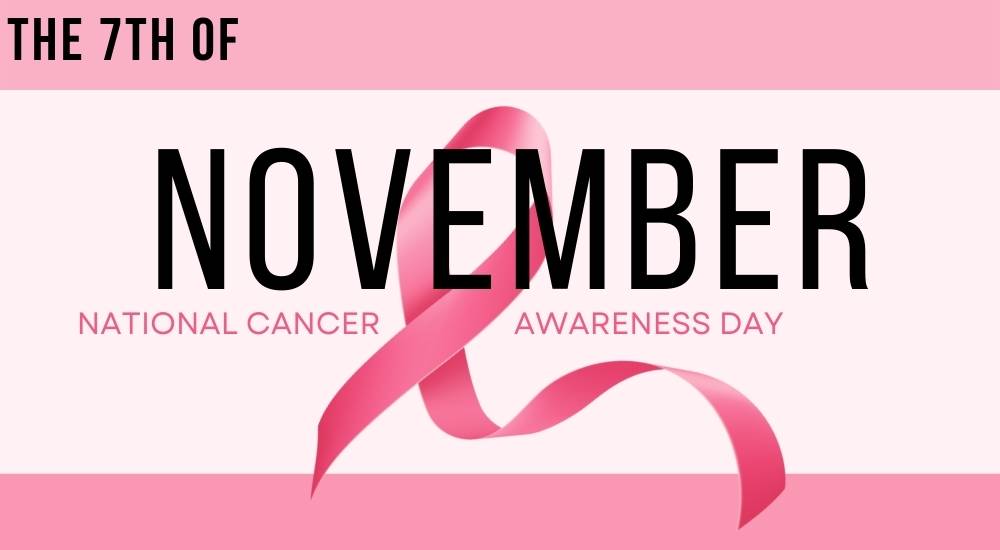 Every year, the 7th of November is celebrated as National Cancer Awareness Day in India to generate awareness about the importance of early detection of lifestyle choices, unhealthy eating habits, and infections that increase the risk of cancer. So, we can tackle the deadly disease timely.

Also, National Cancer Awareness Day is observed on November 7 across the country to educate people about the symptoms of cancer, its treatments, and precautions against it. Across the globe, cancer is the second most death-causing disease as per World Health Organisation.

Cancer is a disease in which some of the body’s cells grow out of control and spread to other parts of the body. 70% of the factors that lead to cancer are preventable such as chemical and atmospheric pollutants, unhealthy eating patterns, a lethal lifestyle, and infections.

In September 2014, National Cancer Awareness Day was first officially announced by then Union health minister Dr. Harsh Vardhan. And the date November 7 was chosen for the occasion to coincide with the birth anniversary of the Novel-prize winning scientist Madame Curie.

Madame Curie was born on November 7 in 1867, she is remembered for her discovery of radium and polonium, and her significant contribution to combating cancer. Her research helped in the development of nuclear energy and radiotherapy for the treatment of cancer.

A crucial step in the nation’s fight against this fatal disease began in 1975, with the establishment of the National Cancer Control Programme, which was implemented to offer cancer treatment facilities across the country. The vision of the program was updated ten years later, in 1984–1985, to emphasize early cancer identification and prevention.

According to the WHO (World Health Organisation), cancer is the second biggest cause of death around the world and in 2018, there were an estimated 18 million cases worldwide, of which 1.5 million were in India alone.

In India, nearly 1.1 million new cases are reported annually. In 2018, there were roughly 0.8 million cancer-related deaths in India compared to 9.5 million worldwide. The number of new cases is estimated to double in India by 2040.

The necessity for early diagnosis of this disease in India stems from the fact that a significant portion of instances includes patients who are diagnosed with it at an advanced stage, decreasing their chances of survival.

Hence, each year National Cancer Awareness Day encourages people to report hospitals, Central Government Health Scheme (CGHS) centers, and municipal clinics for free cancer screening. Also, on this day booklets and leaflets are distributed among the masses to spread awareness on the detection of early symptoms and prevention of cancer.

Some Facts About Cancer;

Across the globe, cancer is the biggest cause of death, accounting for nearly 10 million fatalities in 2020 and the most common were:

In 2020, the most common causes of cancer death were:

How this Event is Celebrated?

Cancer early detection can save lives. Make sure to schedule a test appointment each year. The cities of Ahmedabad, Amritsar, and Aurangabad offer services for cancer screening and detection.

On National Cancer Awareness Day, the focus is on educating those who care about cancer prevention. To raise awareness about how to prevent cancer and how to search for indicators of early symptoms, look online or distribute an educational leaflet.

Moreover, the November 7 birth anniversary of the Novel-prize winning scientist Madame Curie. So, on this day try to read up about Marie Currie. Watch movies or documentaries based on Marie Currie. Read books related to her.

(I) “There are two ways to live your life. One is as though nothing is a miracle. The other is as though everything is a miracle.” – Albert Einstein
(II) “One day at a time, one step at a time. Do what you can, and do your best. Let God handle the rest.”  – Michelle Jones
(III) “Time is shortening. But every day that I challenge this cancer and survive is a victory for me.” – Ingrid Bergman

(IV) “You beat cancer by how you live, why you live, and in the manner in which you live.” – Stuart Scott
(V) “It’s about focusing on the fight and not the fright.” – Robin Roberts
(VI) “You can be a victim of cancer or a survivor of cancer. It’s a mindset.”  – Dave Pelzer

(VII) “You never know how strong you are until being strong is the only choice you have.” – Cayla Mills
(VIII) “When you have exhausted all possibilities, remember this: You haven’t.” – Thomas Edison
(IX) ” Surround yourself with only people who are going to lift you higher.” – Oprah

(X) “Stand in your light and shine brightly because that is how you defeat darkness.” – Leslie Esperanza Espaillat
|(XI) “Cancer is a journey, but you walk the road alone. There are many places to stop along the way and get nourishment – you just have to be willing to take it.” – Emily Hollenberg
(XII) “Challenges are what make life interesting and overcoming them is what makes life meaningful.”  – Joshua J. Marine

(XIII) “Do not follow where the path may lead. Go instead where there is no path and leave a trail.” – Muriel Strode
(XIV) “Life is not measured by the number of breaths we take, but by the moments that take our breath away.”  – Maya Angelou
(XV) “It’s not the years in your life that count. It’s the life in your years.”  – Abraham Lincoln