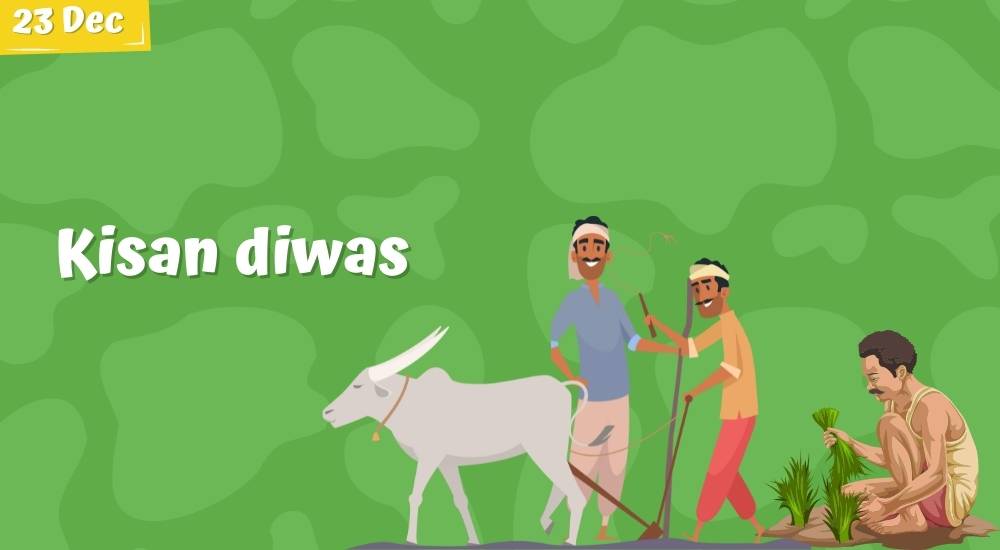 Each year, Rashtriya Kisan Diwas, or National Farmers’ Day, is celebrated across the nation on December 23. This day is committed to honouring India’s peasants and marking the birth anniversary of the “Champion of Indian Peasants” former Prime Minister Chaudhary Charan Singh.

Also, National Farmers’ Day is observed nationwide to recognize and praise the contribution of the farmers in our daily life. Peasants are considered the spine of India’s economy and have a significant role in rural prosperity.

The Kisan Diwas occurs during a time of the year when farmers celebrate the government’s decision to rescind the three divisive farm reform bills. In response to ongoing protests, Prime Minister Narendra Modi declared the repeal of farm rules last month.

National Farmers Day is every year, particularly in places where farming is a significant industry, like Uttar Pradesh, Punjab, Haryana, and Madhya Pradesh.

In 2001, the government decided to officially designate Chaudhary Charan Singh’s birthday as Kisan Diwas to recognize his contributions to the agriculture sector and peasants’ welfare.

Choudhary Charan Singh was born on December 23, 1902, to a middle-class farmer family in Noorpur village in the Meerut district of Uttar Pradesh. He served as the Prime Minister of India between 1979-1980. He is a remarkable testimony of how one can achieve great things despite having modest beginnings and leading a simple lifestyle.

India is predominantly an agricultural nation, and farmers play a critical role in both the national economy and the lives of Indian inhabitants. During his tenure, through his advocacy and successful passage of various bills for farmers’ reforms, Singh was instrumental in shaping India’s agricultural industry.

Chaudhary Charan Singh introduced the Debt Redemption Bill in 1939 to protect farmers from moneylenders and abuses. He also held the Minister for Agriculture and Forest’s position in Sucheta Kripalani’s Ministry from 1962 to 1963.

Farmers are the ones who work around the clock and all year to provide us with all the food that we eat. They are producing the most basic goods for human livelihood. As a result, the entire population of the nation depends upon peasants.

Also, agriculture provides industrial raw materials to many industries, such as textile, silk, oil, sugar, rice, flour mills, etc. As a supplier of raw materials, the agricultural sector is instrumental in the growth of the industrial sector in the economy.

Indian farmers suffer from various problems, which include average farm size, poor infrastructure, low use of farm technologies, a decrease in soil fertility due to over-fertilization, and some government policies that badly influence the farmers.

Kisan Diwas is observed annually to honour farmers’ dedication and sacrifice. It also highlights the problems farmers face, encourages the government to listen to them, and ensures their social and economic security.

The day focuses on educating farmers with the latest learnings of the agricultural sector. And mark the birth anniversary of the “Champion of Indian Peasants,” former Prime Minister Chaudhary Charan Singh.

How to celebrate Kisan Diwas?

Annually, on this occasion, several programs are arranged across the country, such as debates, seminars, competitions, discussions, workshops, exhibitions, etc., to display the farmers’ unparalleled contributions to the growth and progress of the country’s economy.

On this special event, visit it if you have a farm in your area. Sow some seeds of your choice to make the day enjoyable. It can be anything you like, including tomatoes, peas, berries, etc. This year share #kisandiwas2022 or #nationalfarmersday2022 on social media to thank the farmers across the country.

(I) “Never answer a question from a farmer.” – Hubert H. Humphrey
(II) “To make agriculture sustainable, the grower has got to be able to make a profit.” – Sam Farr
(III) “If agriculture goes wrong, nothing else will have a chance to go right in the country.”  – M. S. Swaminathan

(IV) “I always wanted to be a farmer. There is a tradition of that in my family.”- Bjork
(V) “Farming looks mighty easy when your plough is a pencil and you’re a thousand miles from the corn field.” – Dwight D. Eisenhower
(VI) “Agriculture is the most healthful, most useful and most noble employment of man.” – George Washington

(VII) “When tillage begins, other arts follow. The farmers, therefore, are the founders of human civilization.” – Daniel Webster
(VIII) “My grandfather used to say that once in your life you need a doctor, a lawyer, a policeman, and a preacher. But every day, three times a day, you need a farmer.” – Brenda Schoepp
(IX) “Life on a farm is a school of patience; you can’t hurry the crops or make an ox in two days.” – Henri Alain

(X) “A farmer is a magician who produces money from the mud.” -Amit Kalantri
(XI) “The ultimate goal of farming is not the growing of crops, but the cultivation and perfection of human beings.” – Masanobu Fukuoka
(XII) “Agriculture is our wisest pursuit because it will, in the end, contribute most to real wealth, good morals & happiness.” – Thomas Jefferson

(XIII) “The discovery of agriculture was the first big step toward a civilized life.” – Arthur Keith
(XIV) “The farmer is the only man in our economy who buys everything at retail, sells everything at wholesale, and pays the freight both ways.” – John F. Kennedy
(XV) “The farmer has to be an optimist or he wouldn’t still be a farmer.” – Will Rogers

Q. Why is Farmer’s Day celebrated on December 23?

Q. When was Farmer’s Day celebrated for the first time?

Ans: In 2001, the government decided to officially designate Chaudhary Charan Singh’s birthday as Kisan Diwas to recognize his contributions to the agriculture sector and peasants’ welfare.

Q. When is Farmer’s Day celebrated every year?