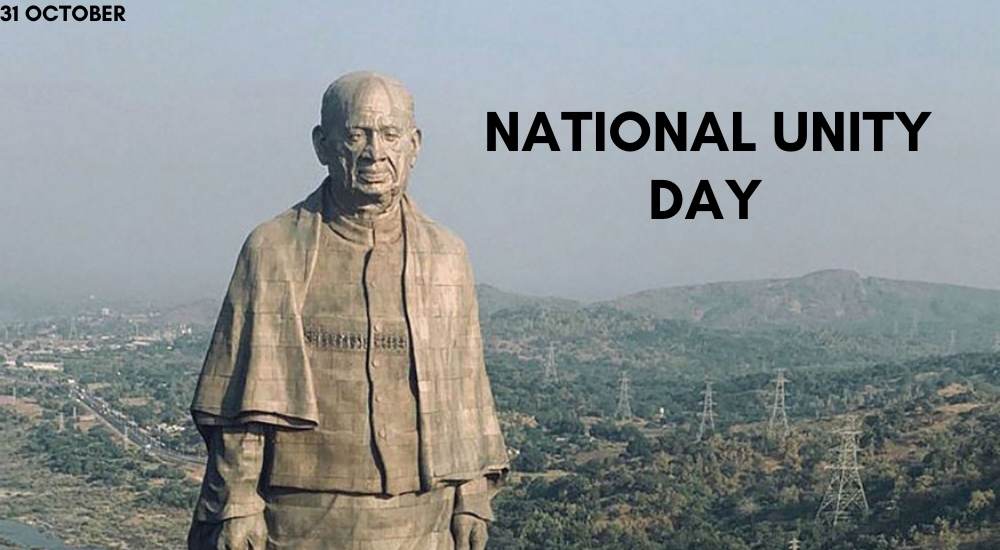 Since 2014, Rashtriya Ekta Diwas, also known as National Unity Day, has been observed on 31st October each year. The day is celebrated with patriotic activities to commemorate Sardar Vallabhbhai Patel’s birthday, who had an important role in the unification of India. Because of this, he is also known as the “Unifier of India.”

Popularly known as the “Iron Man of India,” Sardar Vallabhbhai Patel contributed to the unification of India’s 565 princely states. Rashtriya Ekta Diwas is marked to honor the efforts of this great man, who was an Indian freedom fighter and independent India’s first deputy prime minister and home minister.

Moreover, the objective of establishing this special event is to pay tribute to the great man, Sardar Vallabhbhai Patel, on his birth anniversary, maintain the nation’s unity, and aims to generate awareness about Patel’s extraordinary works for the country.

Vallabhbhai Jhaverbhai Patel- Iron Man of India was born on October 31, 1875. He is commonly known as the founding father of the Republic of India. He was an Indian lawyer and one of the most influential Indian politicians after Independence. Sardar Patel held the position of First Deputy Prime Minister of India during the administration of Jawarharlal Nehru as Prime Minister.

Sardar Patel had a major role and was instrumental in the political integration of India. That’s why he is most popularly known as the founding father of the Republic of India. He also served as Home Minister during the 1947 Indo-Pakistani War and India’s political unification.

In 2014, the Union Ministry of Home Affairs formally stated that National Unity Day would be marked on October 31 in commemoration of Sardar Vallabhbhai Patel’s contribution to India’s Independence and unity.

A 182 m-tall statue of Sardar Vallabhbhai Patel called the “Statue of Unity” was unveiled by Prime Minister Narendra Modi in 2018 on the anniversary of his birth. The tallest statue in the world, it is located on the banks of the Narmada river in Kevadia, facing the Sardar Sarovar Dam near the city of Vadodara, Gujarat.

In the amazing country of India, where there are many different cultures, traditions, faiths, and languages, it is important to keep the people united. Sardar Vallabhbhai Patel stuck to the idea of a united India at a time when many princely states in India were split and advocated for it.

The Theme for Rashtriya Ekta Diwas 2022;

The government announces a unique theme each year for the National Unity Day commemoration. Everything that happens—events, speeches, conversations, campaigns, etc.—is organized around the year’s theme. The theme for the 2021 year was “Atmanirbhar Bharat.” And the theme for 2022 has not yet been revealed.

(IV) “When there is no enemy within, the enemies outside cannot hurt you.”– Winston S. Churchill
(V) “We are only as strong as we are united, as weak as we are divided.”– J.K. Rowling
(VI) “Unity is strength…when there is teamwork and collaboration, wonderful things can be achieved.”– Mattie Stepanek

(VII) “We cannot be separated in interest or divided in purpose. We stand together until the end.”– Woodrow T. Wilson
(VIII) “Unity without verity is no better than conspiracy.”– John Trapp
(IX) “Remember upon the conduct of each depends on the fate of all.”– Alexander the Great

(X) “So powerful is the light of unity that it can illuminate the whole earth.”– Baha’U’Llah
(XI) “For the strength of the Pack is the Wolf, and the strength of the Wolf is the Pack.”– Rudyard Kipling
(XII) “You don’t get unity by ignoring the questions that have to be faced.”– Jay Weatherill

(XIII) “The significance which is in unity is an eternal wonder.”– Rabindranath Tagore
(XIV) “There is beauty and power in unity. We must be united in heart and mind. One world, one people.”– Lailah Gifty Akita
(XV) “No doubt, unity is something to be desired, to be striven for, but it cannot be willed by mere declarations.”– Theodore Bikel