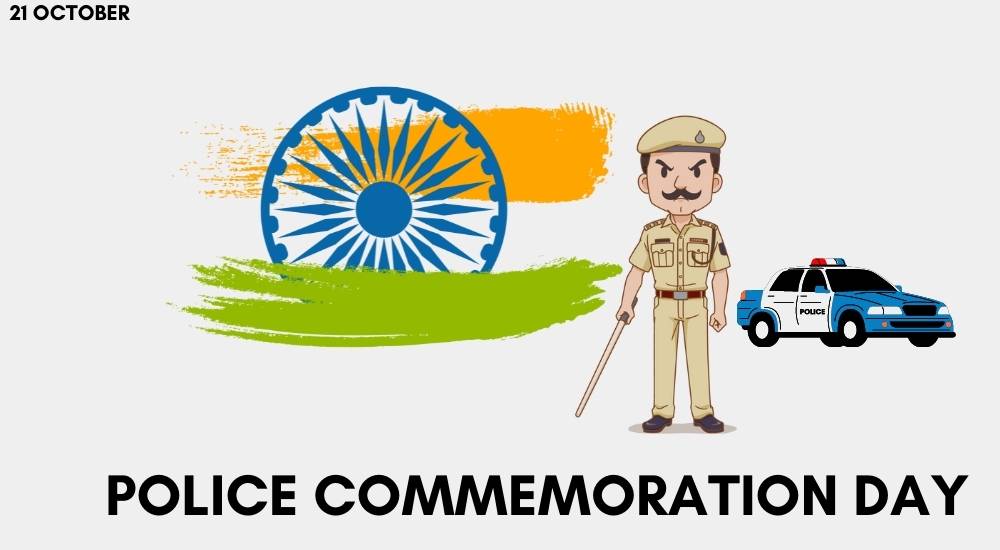 Every year, the 21st of October is observed as Police Day all over India. Police Commemoration Day is celebrated to honor and remember the police officers who have lost their lives on duty for the country.

On this day in 1959, the Chinese army attacked a group of Indian policemen led by Karam Singh near Hot Springs in Ladakh as they searched for a missing reconnaissance mission.

The next year, in January 1960, the 21st of October was formally created as Police Commemoration Day. It is observed to salute the spirits of police forces and their families and brave police martyrs who lost their lives fighting for the nation.

A database claims that India has 14 lakh cops, and hundreds of physically fit employees pass away each year while performing their jobs. None are recognized as “martyrs.” The Indian cops also need a feeling of pride and belonging for top-notch service — people-friendly and efficient.

We have state-of-the-art medical facilities, research and referral hospitals for the armed forces, and much more. In the lack of such fundamental amenities, the police continue to be disregarded. Similarly, housing, children’s education, separated family quarters, etc., need attention.

Each year, this day provides us with a way to recognize the contribution of the Indian police to enhancing the security of individuals, cities, and the nation. Also, this day is meant to honor the supreme sacrifices of the police largely go neglected because of continued indifference on the part of the polity, media, and Society.

On the 21st of October, 1959, the Chinese troops attacked a group of twenty Indian policemen led by Karam Singh due to arguments between the troops. Ten Indian policemen lost their lives, and seven were taken as imprisoners in an unequal confrontation inside Indian territory.

After a month, on the 28th of November, 1959, Chinese armies handed over the dead bodies of the martyred police officers. To honor the memory of these 10 courageous Policemen, the DGsP/IGsP Conference that took place in 1962 decided to observe the 21st of October as Police Commemoration Day every year in the country.

How to Celebrate Police Commemoration Day?

Police Day is commemorated by Parade that has been hosted at the National Level at the Police Memorial in Chanakyapuri, Delhi, since 2012. Prime Minister Narendra Modi inaugurated India’s first national police museum in Delhi on the 15th of October, 2018, at the event of Police Commemoration Day.

The national police museum exhibits and depicts the history, uniform, and gear of India’s central and state police forces. Visit the museum if you can on this special day. Watched movies and documentaries and read books related to the Indian cops. If you know someone servicing the police line, then wish them.

On this day, spare your 2 min to pay tributes to all sacrificers who have lost their lives on duty for the country. Especially a group of twenty Indian policemen was attacked By Chinese troops On the 21st of October, 1959.

(I) “My work has typically been about finding a means to express memory and commemoration for loss and grief.”- John Regan
(II) “If they tell the police, the police will find out she was driving, and her career will be put into hell.”- Nicholas Mosley
(III) “My heroes are those who risk their lives every day to protect our world and make it a better place; police, firefighters, and members of our armed forces.”- Sidney Sheldon

(IV) “We were like heroes, standing there and observing the police, and the police were scared to move upon us.”- Bobby Seale
(V) “That brings up an interesting philosophical question is it okay to snitch to the police on the police?”- Riley Freeman
(VI) “Society questions the police and their methods, and the police say, do you want the criminals off the street or not?”- Kurt Russell

(VII) “A police officer asked me where I was between 4 and 5. I said kindergarten.”- Kayla Knight
(VIII) “The toilets at a local police station have been stolen. Police say they have nothing to go on.”- Ronnie Barker
(IX) “The idea that the police cannot ask questions of the person that knows most about the crime is an infamous decision.”- Edwin Meese III

(X) “A police force, wherever they are, is made up of amazing people, and I respect them a great deal.”- Nancy McKeon
(XI) “There is insufficient support for the police and safety and law enforcement, in general, in the city council.”- Steve Chabot
(XII) “A functioning police state needs no police.”- William S Burroughs

Q. What is the meaning of Police Commemoration Day?

Ans: Every Year, October 21 is observed as Police Day all over India. To pay tributes to all sacrificers who have lost their lives on duty for the country. Especially a group of twenty Indian policemen was attacked By Chinese troops On October 21, 1959.

Q. Why is Police Day celebrated?

Ans; Police Day is celebrated to honor twenty Indian police officers who were attacked By Chinese troops On October 21, 1959.

Ans: Police Day is commemorated by Parade that has been hosted at the National Level at the Police Memorial in Chanakyapuri, Delhi, since 2012.