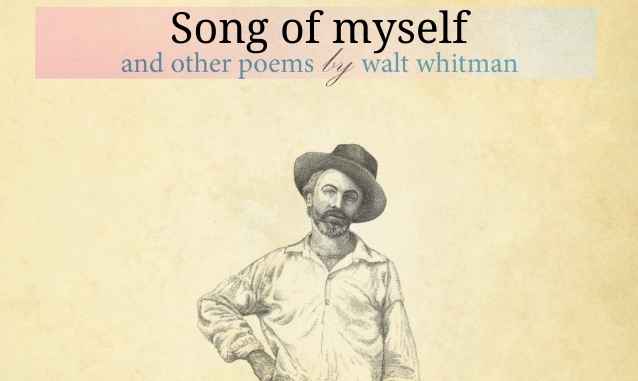 Frankly speaking, analysis of the song of myself could be only intimidating until you know about Walt Whitman. The major literary figure, Walt Whitman (1819-1892) was one of the greatest American poets and journalists of the 19th century. He is usually put in the school of American Transcendentalists for his belief in ‘self-reliance’ and non-conformist writing style.

As a poet, Whitman has been appreciated for his descriptions and metaphors. He is the writer of the vernacular language and had several followers in the 20th century. Whitman’s subjects have been part of much controversy. He is a worshiper of the human body, considering that the body is full of perceptions, not analysis, and he often enlists a number of scenes or things to bring in a wide variety of subjects together in his work.

Whitman does not write in the traditional rhyme schemes or stanzas rather his poetic meter is sometimes similar to the natural speech. The “Song of Myself” is a free verse poem written by American writer, Walt Whitman. There are three important themes (a) the idea of the self, (b) the identification of the self with other selves, and (c) the poet’s relationship with the elements of nature and the universe. Moreover, the poem is a collection of numerous ideas, places, characters and symbols. A reader can perceived these things through brief analysis of the “Song of Myself”.

Analysis of the Song of Myself

The poem “Song of Myself” was first published in 1855 as a part of ‘Leaves of Grass’ and was later republished with fifty-two sections in 1891-92. ‘Song of Myself’ is like a journey that takes the readers from a human body to the soul and finally to the highest regard for natural order of things.

Popularly known as the father of American ‘free verse’, Whitman gave American one of its true epics through this poem. ‘Song of Myself’ is considered to be one of his most comprehensive literary work that clearly depicts Whitman as a poet as well as an individual. The poetic device that Whitman makes use of the most in ‘Song of Myself’ is anaphora or repetitive beginnings of lines, such as:

In vain the speeding or shyness,
In vain the plutonic rocks send their old heat against my approach,
In vain the mastodon retreats beneath its own powder’d bones…..

The Song of Myself is a Reflection

“Song of Myself’ is not just a great poem but also a reflection of America’s culture, the confused and magnificent idea about the nation among its citizen, and also a representation of every American individual. The poem depicts Whitman’s ideal America, a nation that protects as well as prospers on independence and equality.

The ‘Song of Myself’ depicts Whitman, literally, as well as symbolically. The poem begins with Whitman introducing him and then his imaginative journey that is captured in episodes or “vignettes”. Symbolically, the poem represents what Whitman approves of- truth, brotherhood, equality, individualism. It also tells us what the poet disapproves- preachers and judgmental people.

The Song of Myself is Written in First Person

The poem is narrated in first person. The poet clearly mentions that he is the narrator. Whitman has created a metaphorical journey through the poem which is why the setting of the poem changes with every episode. It, in a way, represents the vastness and diversity of the American democracy.

But the poem also “celebrates” the poet and his thoughts. Whitman also hopes that every individual can relate to the poem and celebrate himself. “Song of Myself” is also a ‘catalogue’ poem in the sense that it lists a number of scenes, objects and places. It is so minutely detailed as a poem that it takes the status of an epic.

Multiple Themes in The Song of Myself

“Song of Myself” is a vast poem and has many themes. The most important themes can be categorized as Whitman’s concept for America, his concept about the cycle of Life and Death, and celebration of individuality. Whitman’s poem is a vision for his dreamland- America. He wants every American to be compassionate to each other. He urges for equality and brotherhood. Whitman was always against the bloodshed that wars bring along and many sections in the poem express his worries.

Depicts the Perpetuity of the Soul

His America is a democratic land where every soul is free to live. He also wants to stress on the naturalness of death. He writes in his poem that “there is really no death” and people should accept it and feel lucky about it. Whitman states that there is always life after death and hence nothing ever collapses. Through the poem, Whitman also states the magnanimous existence of his soul. The poet writes that he has the ability to distance things from him “but call any thing back again when I desire it”.

Concluding Words on The Song of Myself

So, through this analysis of the Song of Myself, it can be said that Walt Whitman’s poem has achieved a cult status in American literature. The poem is a collection of numerous ideas, places, objects characters and symbols, but the most important idea of the poem is the poet’s perception of the world around him. The writing style, subject and emotions of the poem are relevant to every American even in the modern times.

Reads Beyond The Song of Myself Analysis Under Literature Blogs