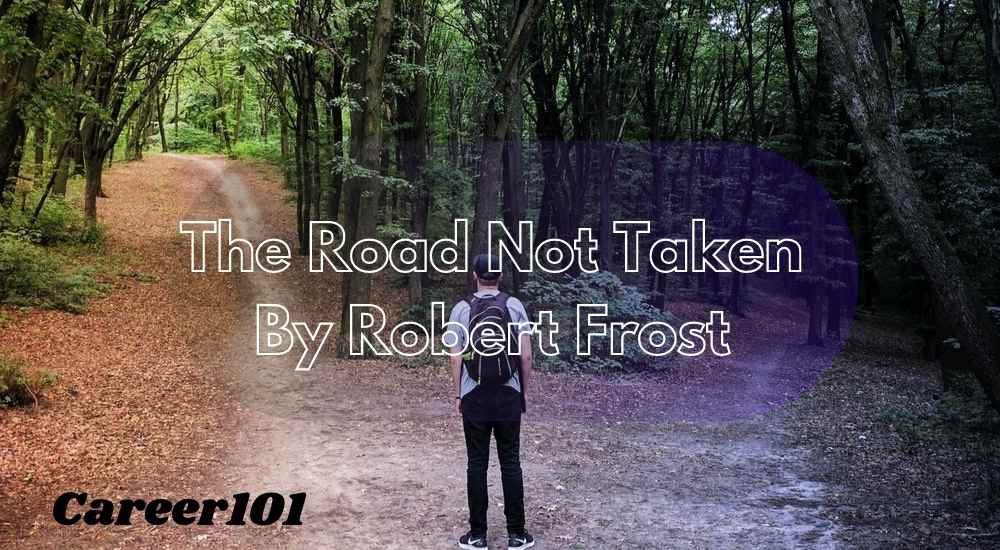 The Road Not Taken Summary

This summary is an account of real life dilemma in making decisions as portrayed in the poem “The Road Not Taken” by Robert Frost. Under Mountain Interval Collection of Frost, the poem features as first one. The poem also makes part of CBSE Class 9 poetry syllabus. So, here goes The Road not Taken Class 9 summary:

Stanza one of “The Road Not Taken”, starts with signifying a situation wherein, the narrator is walking down a road which eventually leads into a fork/diversions and he has to choose ONE out of the TWO path options.

The narrator keeps standing at the juncture of diverging paths and looks through as far as he could. He tries hard to figure out the pros and cons of both the paths before he takes one, however he is unable to figure out as both the paths appear confusingly similar to him.

He then takes one of paths as he feels that the one he is picking is grassy meaning, it was walked over by fewer people. The poet also thinks of treading the other path some other day although deep inside his heart, he knew that he would not be able to return. He could well anticipate that one path leads to another and it would be almost impossible to to start his journey afresh.

Under last and 4th stanza the narrator, the poet himself says that one day he would tell the world that he had to decide between apparently similar choices and he decided to take the road which fewer people took and that ONE decision made all the difference in his life.

Message that we can draw from the poem is that the choices and decisions once made are usually difficult to change and start afresh. One bad decision can make us regret to a point of no return. The poem tells us to be careful and wise in making choices in life as they end up shaping our future. Our life is what we consciously chose at crucial life stages.

Summary of The Road Not Taken is about deciphering the central theme of the poem i.e, divergence of paths and confusions on decision making, critical to life. Hopes and aspirations are basic to decision making but mere impulse can cause irreversible harms. Due assessment of situations and gut feeling instead, may me helpful.

Explanation of The Road Not Taken Stanza by Stanza

The Road Not Taken starts with “Two roads diverged in a yellow wood, …”  in first stanza and ends with “…..And that has made all the difference” under fourth stanza.  And, all the life’s message stretches through all the four stanzas.

In the first stanza the poet is walking down the road. He reaches to a diversion from which two roads were forking into two different directions. The poet feels limited by the ability to travel only one of the roads as, he is just one person. He stood at the junction and tried to look at the roads where they led. However, he could not see very far because the roads were not straight and covered with trees.

In the second stanza, the poet decides to take one of the paths and leaves another for other day. After a while, he is under impression that both the roads are equally good. Walking the road for sometime however, the poet gets into impression that it is the better of the two as it is grassy and looks less worn than the other path. After his few steps, the poet feels that both the paths are almost the same. And, that there is hardly any difference between them, as they are equally worn-in.

In the third stanza, the gets into introspection mode, reflecting that in the morning both roads were similar as they were equally covered in leaves with no sign of being trodden by human. Hence he had decided to take one path that day and kept the other for another day. But then, he contradicts his own logic, saying that because one road is going to lead to another, it is not possible to go back and take the other path.

In the fourth Stanza, the poet imagines that sometime in the future, he would revisit his decision of choosing that particular path. And, that he would explain the world as to how picking the road less travelled had made all the difference in his life.

ALSO CHECK: William Wordsworth as a Poet of Nature

The Road Not Taken Analysis on Literary Devices

The road not taken literary devices help the poem outstand and it is these devices that offer grounds for analysis. Considering Frost’s stature in literary space, analysis of this poem requires an incisive mind. What the best literary critics say about the work goes below.

Meaning of the Poem Misunderstood

The Road Not Taken is one of the most misunderstood poems as per literary critics. Contrary to the common perception, the poem itself, never suggests on selecting a particular path. It only portrays the real-life crises of decision making.

Structure of the Road Not Taken

The form used within the Road No Taken is “sound of sense” which brings a sensory perception to a human mind. Precisely, the sound of words within the poem, forms imagery on account of sense. Also, the poem has been written in the first-person point of view that makes it a lyric poem. The entire poem is in four stanza each having 5 verses.

Rhyming Scheme of the Road Not Taken

The Road No Taken poem follows a definite rhyme scheme which works out as ABAAB. It is seen that the sound with which the first line ends, appears again in the third and fourth lines whereas, the second and the fifth lines rhyme together.

Iambic Meter of the Poem

Barring a few variations, there are four iambs in every line of the Road Not Taken. The stress seems falling on the second syllable of each foot. Accordingly, in nine syllable lines of the poem, it is a case of iambic tetrameter.

Literary Devices Used in the Road Not Taken

Metaphor Within the Poem

Ironic Undertones in the Road Not Taken

The poem has in it hints of remorse for choosing a path having no knowledge about either of the two paths. There is another hint when poet feels unable to get back and the possible loss after ruling out another path.

Use of Imagery in the Road Not Taken

By using the phrase: “two roads diverged in a yellow wood” the poet uses visual imagery about colour of autumn and the place where the narrator is struggling to make a decision. Pale leaves on one of the roads and black leaves on the another has been artistically used to create imagery of untrodden path and trodden one respectively. These roads in itself work as metaphor for unconventional and conventional pursuits respectively.

Tone and Mood in the Poem

Robert Frost has used Multiple of tone and mood in The Road not taken. When the narrator says “sorry” for not being able to travel on both roads, the tone is emotive but not straightforward. The phrase, “long I stood” represents the mental state (mood) of indecisiveness. Similarly, the use of “perhaps” perhaps” represents the tone of dilemma.

Themes of the poem the Road Not Taken

The core theme of the poem is uncertainty about making choices. Other themes include: indecision, fate, and over-thinking. The speaker has to make a choice but he is uncertain about the better one. Meaning, he is unsure that, what he chooses will work for him.

Historical Context of the Poem

A biographical account by Lawrence Thompson suggests that the Road Not Taken is based on Frost’s friend named Edward Thomas who used to be always regretful of his decisions.

For many decades since Frost wrote this poem, so called wise often recommended us to take the path pursued by fewer. However, human by its very instincts loves going contrary. There are people who made disruptive experimentations in choosing their fields of career and occupations. And, they chose the fields which were already taken up by many. Interestingly, they dominated the field as well. Steve Jobs in relation to Mac and Mukesh Ambani in relation to Jio, are two such prominent examples who took no newer paths.

A Conclusive Note on The Road not Taken Summary

The insightful poem “The Road Not Taken” by Robert Frost, is full of parallel meanings and interpretations. It remains one of the top-rated poems in the history of English Literature and puts Robert Frost among the best poets of all times. Robert L. Frost is one of the highly celebrated poets of the 20th century. Particularly, he earned fame in realistic portrayal of rural America. Frost’s famous poems include “Stopping by Woods on a Snowy Evening”, “Two tramps in Mud Time and “the Road Not Taken”. He wrote The Road Not Taken in 1915 in new England. Precisely, the area is North-eastern region of the United States comprising the states of Maine, Vermont, New Hampshire, Massachusetts, Connecticut and Rhode Island.

People see The Road Not Taken as championing the idea of “following your own path” in modern interpretations. However, Frost wrote this poem as a sarcastic portrayal of his friend Edward Thomas’ mind. Factually, Thomas had always been indecisive about which route to take. “The Road Not Taken” makes part of CBSE Class 9 English poetry to give an idea of real life dilemma to kids in an interesting way.

“The road not taken” also holds suggestive value in choosing less pursued avenues when it comes to starting out. However, I personally see that the more competitive a niche is, the higher scopes of making the profit lies therein. In fact, you can make it BIG in any of the areas of pursuits; all that it takes is firm determination and uncompromising values. I would rather subscribe to the idea of: “No path is better than the other, choose one and stick to it, you will be unstoppable!”

Q. What is the Summary of The Road Not Taken Class 9?

Ans: A short summary of the poem THE ROAD NOT TAKEN is that, real life situations pose uncertain choices to pick from. Once, the poet comes across a juncture when his path forked into two. And, he had to take a decision as to which route to take. The poet stands there for long; tries hard to figure out which road is better as both looked similar. He chooses the one which was less travelled. In the last, the poet confesses that, it was THAT ONE decision which made all the difference in his life.

Q. What is the Message of the Poem The Road Not Taken?

Ans: An important message this poem conveys is that at times we come across situations when we have to choose one among seemingly similar choices but decision once made can be crucial. We must give due thought in making the choices as returning may not be possible.

Q. What is the Conclusion of the Poem The Road Not Taken?

Ans: The poem’s concludes with “…..and that has made all the difference.”. The concluding lines conveys that the decision taken make all the differences. Meaning, right or wrong decisions at life’s stage have huge bearing in shaping the individual’s life.

Q. What is the Main Idea of the Poem Road Not Taken?

Ans: The main theme of the poem The Road Not Taken, is that confronting with dilemma to make choices is very human. But, making right choices is paramount as that can change the entire course of life and that everyone’s life is shaped by one’s decision at the crucial junctures of life.

Reads Beyond Summary OR Gist of The Road Not Taken