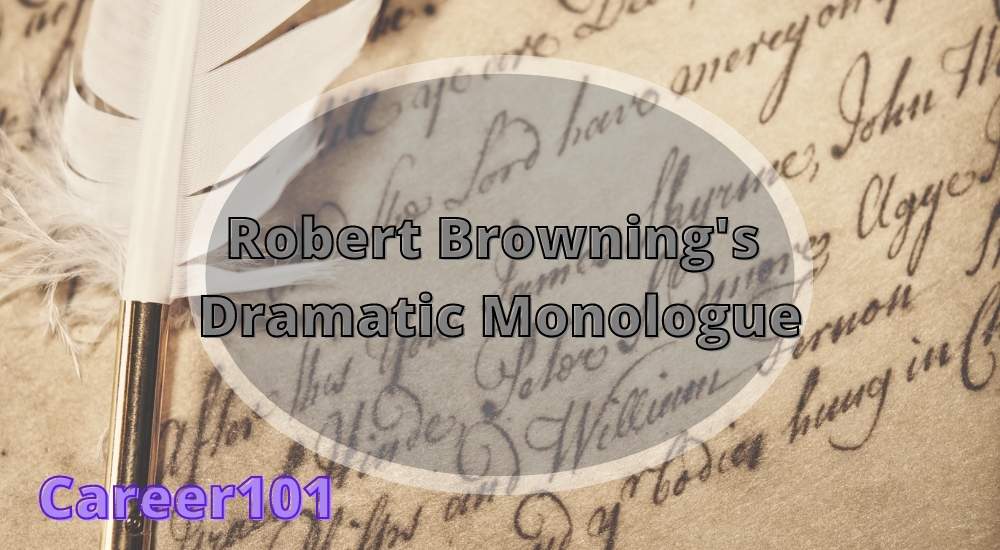 My last Duchess Summary here is the crux and analysis of Robert Browning’s dramatic monologue. Theme of my last duchess revolves around suspicious death of duchess of Ferrara which was actually a deliberate killing by the Duke himself. And, the duke is negotiating for his next marriage to the daughter of another powerful family.

Poets such as Lord Tennyson, Matthew Arnold as well as Dante Gabriel Rossetti wrote a number of poems that fully or partially reflected the characteristics of the dramatic monologue. Based on a historical reference to the life of Alfonso II of Ferrara and his young wife Lucrezia, Robert Browning has created a masterpiece of poetry in his “My Last Duchess”.

At the poem’s opening, the speaker (Duke of Ferrara) has just pulled back a curtain to direct the attention of representative towards the portrait of his former wife. This envoy (representative) is a nobleman, whose daughter is soon going to marry with Duke. The speaker praises the painting of his wife and remarks on the art of the painter (Fra Pandolf).

The speaker says that the painter (Fra Pandolf), whom the duke of Ferrara believe has captured the singularity of his former wife’s glance. However, the speaker (Duke of Ferrara) insists to the representative that his former duchess’s deep, passionate glance was not reserved solely for her husband. As he expressed that she was “too easily impressed” into sharing her too friendly nature.

In the process of making remarks on his former wife, the speaker objects that everything for his duchess was the same and made her equally happy, whether it was a brooch or present from him that she wore at her chest. nevertheless, or the nature like sun setting in the West, a branch of cherries which some interfering person snapped off a tree in the orchard for her, or the white mule she rode on around the terrace.

The speaker on further discussion with the envoy about his former wife, he chastises the behavior of his duchess. Moreover, his tone grows harsh as he recollects how easily she could get impressed by both human and nature, which insulted him as he explained that she did not give special favor to the “gift” of his “nine-hundred-years-old” family name and lineage.

The speaker explains that she even gives more smiles at others, so he gave commands and all her smiles stopped forever, presumably because he had her killed. Now she only lives on in the painting made by the painter (Fra Pandolf).

The speaker (Duke of Ferrara) ends his story and then asks the representative to stand up and accompany him to meet the other guests in the downstairs. He also asks to accompany him back to the Count, the father of the duke’s prospective bride to-be. The duke also mentions that he expects a high dowry, although he is happy enough with the Count’s beautiful daughter.

He ends his speech by insisting that he and the Count’s envoy go downstairs together. On their way, he directs the envoy’s attention to a statue of the God Neptune taming a seahorse in his collection, which is a special work of art that Claus of Innsbruck cast in bronze specifically for him.

Analysis of My last Duchess

The speaker of “My Last Duchess” is Duke of Ferrara. This poem is a dramatic monologue. In the beginning of the poem, the duke directs to an envoy to the painting of his former wife. The Duke speaks about his former wife’s perceived inadequacies to a representative of the family of his bride-to-be, revealing his obsession of controlling others in the process. These things are expressed throughout the poem, but understanding them from the opening helps to illustrate the irony that Browning employs.

Like many of Robert Browning’s other poems, “My last Duchess” is a study of men and characteristics where the poet reveals the psychology of his characters through dramatic lyrics. The story of ‘My Last Duchess’ revolves around a rich but arrogant Duke who intends to marry a Count’s daughter.

When an envoy from this Count arrives at the Duke’s place, he takes him to his private art gallery where a portrait of his last” duchess hangs. This shows that Duke had been married earlier to an other woman and is all set for his new association with the Count’s daughter. The Duke does not let the envoy speak and orders him to sit or stand or walk according to his will. He details out his last duchess’s nature to the envoy. Without making any derogatory remarks about his late wife, the Duke manages to humiliate her and show her as frivolous and undeserving woman. He says.

………………………………………she had
A heart- how shall I say?- too soon made glad
Too easily impressed; she liked whatever
She looked on, and her looks went everywhere

The Duke does not talk about his dead wife with remorse rather he is seen excited at the thought of marrying the Count’s daughter.

Browning reveals that the Duke had no respect for his wife, or women in general. The Duke believed that his wife behaved irresponsibly. The Duke remained upset with his wife because she never maintained the decorum of being a public figure of repute. Additionally, Browning reveals that the Duke was extremely cautious about his reputation and had an ego that pleased in taming women around him.

After complaining about his wife, the Duke hints at the artifice of Neptune taming a sea- horse to make the messenger understand that he would want his new wife to be obedient or otherwise he knows how to do it by himself. The Duke is a wealthy man but his character is known in a negative light. Through the Duke’s character, Browning has made a social remark on aristocracy.

Browning has effectively highlighted the arrogance and snobbishness of the Duke’s character. The Duke does not shy away from asking for dowry and commands his visitor time and again in the poem. He disliked his wife for being compassionate and feels proud that it was due to his power that his wife stopped smiling and stands as a mere object in a painting. He says:

I gave commands;
Then all smiles stopped together. There she stands
As if alive

At the same time, the Duke was extremely proud of his nine hundred year old legacy and family stature. Browning has masterfully delineated the psychology of the arrogant Duke through the vocabulary of the poem and rhetoric.

Browning’s writing style is noted for its irony, art of characterization, dark humour, critical social commentary and settings. My Last Duchess has been written in iambic pentameter and rhyming couplets. Browning has made generous use of enjambment to reflect the voracious nature of the Duke. The poet also brings variations in the rhyme scheme to present the Duke’s compulsive nature.

‘My Last Duchess’ is a true dramatic monologue in the sense that speaker’s character is completely different from the poet, there is presence of an audience but it is never a two-way dialogue. The poem is full of theatrical effects and the primary aim is to reveal the inside of the Duke’s character through his words. Browning certain characteristics from Romantic Poetry, the poet has created a mysterious account of aristocracy and murder belonging to a historic setting.

FAQs on “My Last Duchess”

Q. What is the main message in My Last Duchess?

Ans- My Last Duchess” is all about power: the political and social power used by a man. Browning has presented the character of a duke who wants to rule his woman with an iron fist. Nevertheless, Jealousy, hatred, and power are the major themes of this poem.

Q. What is My Last Duchess Summary?

Ans- The poem is loosely inspired by historical events involving Alfonso, the Duke of Ferrara, who lived in the sixteenth century. This poem is a dramatic monologue of Robert Browning. It is said that the Duke was the main speaker of the poem and informed us that he’s engaging an emissary who is trying to negotiate the Duke’s wedding (he was recently divorced) to his daughter from a wealthy family.

Q. Why did Browning Write My Last Duchess?

Ans- The poem My Last Duchess was written in the Victorian period, which was a time when women were viewed more as an item of property in marriages than a real human capable of love. Browning no doubt thought about this when he composed the poem, which was an attempt to examine the dominant role of males in society, and the concept of ownership and the place for women when it came to marriage.

Q. How did the Duke regard his wife?

Ans- The duke describes the last duchess as if she were wanton with her attention, unintentionally considerate of her class and overly friendly

Q. What kind of person is the duke in My Last Duchess?

Ans- The duke in poem is haughty, imperious, jealous, and autocratic.

Beyond My Last Duchess Summary Under Literature