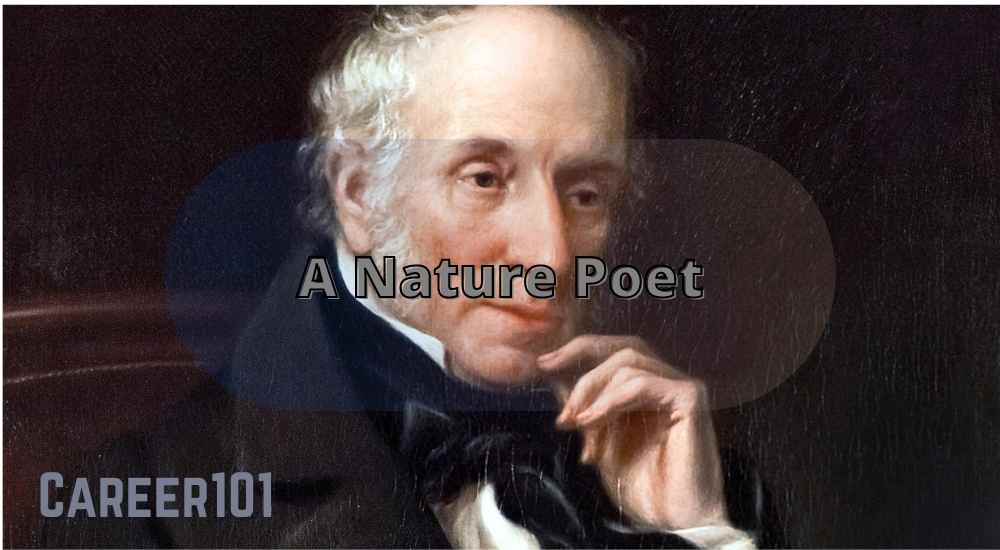 William Wordsworth as a Poet of Nature is the TRUE alter ego of Wordswoth. P.B Shelly another great poet of romanticism called him “Poet of nature” and he himself called him “A Worshiper of Nature. Wordsworth was of belief that harmonious existence of humans alone can give true happiness, kind heart and universal brotherhood. Vivid picture of mountains, rocks, rivers and trees in his poems shows his TRUE love for the NATURE.

Legendary William Wordsworth (1770-1850) is the greatest Nature Poet of the Romantic Age and “the Muse of English Poetry” in true sense. Wordsworth is known for his poems such as ‘Lines Composed A Few Miles Above Tintern Abbey’, ’Lucy Gray’, ‘I wandered Lonely As A Cloud’, ‘The Solitary Reaper’ and many other remarkable pieces of Romantic poetry. Wordsworth is also considered to be the “Highest Priest of Nature’ for his spiritual admiration of mother of Nature. Wordsworth brought in a new era of poetry where nature was represented, appreciated and coloured with imagination. The poet went against the Neo-Classical style of poetry that stressed on about kings and princes, Lords and Ladies and other contemporary topics.

William Wordsworth was born at Cockermouth, a town is actually outside the Lake District. His father, who was a lawyer, died when William was thirteen years old. The elder Wordsworth left very little money , and that was mainly in the form of a claim on Lord Lonsdale, who refused outright to pay his debt, so that William had to depend on the generosity of two uncles, who paid for his schooling at Hawkshead, near lake Windermere. Subsequently, Wordsworth went to Cambridge, entering St John’s College in 1757. His work at the university was quite undistinguished, and having graduated in 1791, he left with no career in view. After spending a few months in London, he crossed over to France (1791), stayed at Orleans and Blois for nearly a year. An enthusiasm for the revolution was aroused in him; he himself has chronicled the mood in one of the happiest passages:

Bliss was it in that dawn to be alive,

But to be young was very heaven!

He returned to Paris in 1792, just after the September massacres, and the sights and stories that greeted him there shook his faith in the dominant political doctrine. Even, yet, however, he thought of becoming a Girondin, or moderate Republican, but his allowance from was stopped, and he returned to England. With his sister Dorothy (henceforward his lifelong companion), he settled in a little cottage in Dorset; then, having met Coleridge, they moved to Alfoxden, a house in Somersetshire, in order to live near him. It was there that the two poets took the series of walks the fruit of which was to be the Lyrical Ballads.

After a visit to Germany in 1798-99, the Wordsworth settled in the Lake District, which was to be their home for the future. In turn, they occupied Dove Cottage, at Town End, Grasmere(1799), Allan Bank (1808), Grasmere Parsonage (1811), and lastly, the well known residence of Rydal Mopunt5, which was Wordsworth’s home from 1813 till his death. Shortly before he had moved to Rydal Mount, he received the sinecure of Distributor of stamps for Westmorland, and was put out of reach of poverty.

The remainder of his life was a model of domesticity,. He was carefully tended by his wife and Sister, who, with a zeal that was noteworthy, though it was injudicious, treasured every scrap of his poverty that they could lay their hands on. His great passion was for travelling. He explained most of the accessible parts of the continent, and visited Scotland several times. On the last occasion (1831), he and his daughter renewed their acquaintance with Scott at Abbotsford, and saw the great novelist when he was fast crumbling into mental ruin. Wordsworth’s poetry, which at first had been received with derision or indifference, was now winning its way, and recognition was general., In 1839, Oxford conferred upon him the degree of D.C.L.; in 1842, the Crown awarded him a pension of 300 pound a year; and on the death of Southey in 1843, he became Poet Laureate.

He records that his earliest verses were written at School, and that they were “ a tame imitation of Pope’s versification.” This is an interesting admission of the still surviving domination of the earlier poet. At the University, he composed some Poetry, which appeared as “An Evening Walk” (1793) and “Descriptive Sketches” (1793. In Style, these poems have little originality, but they already show Wordsworthian eye for nature. The first fruits of his genius were seen in the Lyrical Ballads (1798), a joint production by Coleridge and himself which was Published at Bristol.

Wordsworth had the larger share in this book. Some of his poems in it, such as “The Thorn” and the “The Idiot Boy”, are condemned as being trivial and childish in Style. While a few, such as “Simon Lee” and “Expostulation and Reply”, are more adequate in their expressions; and the concluding piece, Tintern Abbey, is one of the triumphs of his genius. He wrote many poems in his lifetime which show his brilliance and excellence.

William Wordsworth as a Poet of Nature Poet

William Wordsworth, “the Muse of Poetry” is the greatest Poet of Nature of the Romantic Age and thereafter. He is widely known for his Nature poems ‘Tintern Abbey’, ’Lucy Gray’, ‘I wandered Lonely As A Cloud’, ‘The Solitary Reaper’ and many other remarkable pieces of Romantic poetry. Wordsworth is also considered to be the “Highest Priest of Nature’ for his spiritual admiration of mother Nature. He brought in a new era of poetry where nature was represented, appreciated and coloured with imagination. The poet went against the Neo-Classical style of poetry that stressed on about kings and princes, Lords and Ladies and other contemporary topics. Wordsworth began writing about “low and rustic life’ and his poems were ‘incorporated with beautiful and permanent forms of nature.

A Wordsworth Eye for Nature

In his poems , Wordsworth has shown numerous aspects of nature: from refreshing breeze to paddy fields; from floating clouds to twinkling stars; from dancing daffodils to “steep and lofty cliffs”, to pastoral farms, and more. The poet remarked once that he could hear “the still, sad music of humanity” in Nature . He urged his readers to let Nature be a teacher and Nurturer for all mankind. Wordsworth saw divinity in nature and considered it to be “the guardians of … all moral being”. The poet elaborated on elemental Joys of that came from blooming of a flower and tranquility of a lake. The poet was writing at the time when industrialization had started overtaking the world and cities had begun to be morphed into concrete jungles. By concluding the beauties of nature in his poems, Wordsworth introduced the masses to a new world of calm and peace.

‘Tintern Abbey’ traces the development of Wordsworth’s love for Nature. In ‘The Prelude”, Nature seems to nurture “by beauty and by fear”. In ‘Daffodils’ , Wordsworth describes a delight sight of dancing flowers, but he is not present in this scene, rather he recreates this scene from his living room. Famous critic Cazamian says:

“To Wordsworth, nature appears as a formative influence superior to any other, the educator of senses and mind alike”.

The critic points out that Nature “speaks to the child in the fleeting emotions of early years and stirs the young poet to an ecstasy”. The poet believed that nature offered him source of joy and healed from any sadness. This admiration of Nature and treating it as a living being is a distinguished characteristic of Wordsworth’s poetry. Wordsworth’s “pantheism” or love for “divinity in nature” comes alive in all his poems and delights the readers.

As a Child, Nature was a source of delight for Wordsworth but as he grew up, it became a thing of worship. In Tintern Abbey’ , Wordsworth elaborates the different stages of his love for Nature. He says that in the first stage, he was attracted by the physical beauty of Nature. He admired the sceneries and the fragrances without having any mystical and theological notions about Nature. The Second stage was “Sweet Sensations”. The poet writes that he was thrilled with the sounds and sights that he saw around him. In the third stage, Wordsworth’s love to Nature makes him see the inner spirit, the divinity. The poet began to feel the spiritual and mystical aspects of nature in the later years of his life. It is in this stage that Nature becomes a source of learning for “a heart that watches and receives”.

ALSO CHECK: The Picaresque Novels and Their Influence on Fictions

Quotes of William Wordsworth on Nature

Quotes of William Wordsworth on Nature are another way to understand his love for the Nature. His quotes are of immense value and extremely relevant to the world for preserving nature too.  William has many quotes pertaining to nature however they are not limited to Nature alone. William Wordsworth Quotes rather touch multiple dimensions of life; be it love, compassion, wisdom and so on.

1.“Nature never did betray, The heart that loved her.”

2.“For I have learned to look on nature, not as in the hour of thoughtless youth; but hearing oftentimes the still, sad music of humanity.”

4.“Come forth into the light of things, Let Nature be your teacher.”

5.“Then my heart with pleasure fills, And dances with the daffodils.”

How Wordsworth Was Different from Other Romantic Poets?

During the Age of Romanticism, Nature was an important element in all poems. While nature was an element of every poems, Wordsworth’s treatment of Nature was different from other romantic poets. P.B. Shelley showcased the fierce power of nature in his poems; Coleridge added fantasy to Nature in his poems; Lord Byron showed the wild and stormy aspects of Nature and Keats saw the supernatural in Nature. But Wordsworth had a heart that loved Nature. In many of his poems, Wordsworth is having a conversation with Nature, unlike his fellow Romantic poets. Wordsworth believed that men can learn from the wisdom of Nature. Wordsworth wrote in ‘Immorality Ode’ that to him “the meanest flower that blows can give the/Thought that often do lie too deep for tears”. He believed that divinity was integral to Nature. His feelings towards Mother Nature establish him as a distinguished Romantic poet and more as “Worshipper of Nature”.

Q & A Related to Wordsworth as A Poet of Nature

Q. How Wordsworth Can be Called a Nature Poet?

Ans- Life and works of Wordsworth is the biggest proof of him being a poet of nature. Nature has a central position in his poetry and he himself called him “a worshipper of Nature”. Wordsworth’s philosophy includes the views of Nature as a living personality, Nature as a source of consolation & joy AND Nature as a great teacher, guardian & nurse. Wordsworth was of the belief that living personality of nature has an all-pervasive divine spirit or mystical pantheism.

Q. What is Nature According to Wordsworth?

Q. How does William Wordsworth Describe Nature in His Poem?

Ans- In the Lines written in Early Spring: nature assumes a personality of divine spirit that permeates all objects. In The Solitary Reaper: Nature triggers imagination and wonderment and once the song is heard, imagination begins to take over sensibilities.

Q. What are the Characteristics of William Wordsworth’s Poetry?

Ans- A revered approach for nature, denouncing modernity, prominence to the imagination, a fascination to childhood, and use of common language are few Characteristics of William Wordsworth’s Poetry.

Reads Beyond William Wordsworth as A Poet of Nature