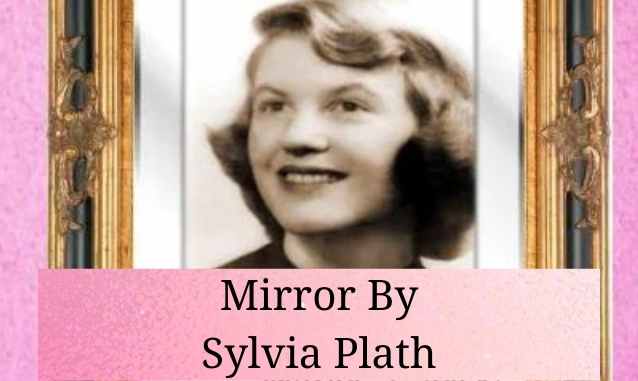 If you are afraid of facing realities, the poem Mirror by Sylvia Plath, could be a great read for you. Undoubtedly, the mirror is the most truthful thing and the person who honestly helps you introspect is your biggest well wisher. Narratives around Mirror are symbolic but very ably it exposes the ongoing thoughts in one’s head with time & space.

Sylvia Plath was an prominent Americans poet, novelist and short story writer of 20th century. Much of Plath’s poems were published posthumously, including her “Crossing the River” and “Winter Trees” in 1971. Plath wrote a semi-autobiographical novel “The Bell Jar”, which was published in 1963 under the pseudonym “Victoria Lucas”.

Her most famous poem “Tulips” was published in a collection named “Ariel” in 1965. The “Tulips” is put in the genre of “confessional poetry’, which is an account of extremely personal trauma or psychological experience. Similarly, “Mirror” by Sylvia Plath is one of the most acclaimed poems in literary space. The poem brings up harsh realities of human life and conveys as to how should to make peace with.

The poem ‘Mirror’ by Sylvia Plath is a short but meaningful narrative about a ‘silver and exact’ mirror, its importance in the life of human beings and its role in showing truthfulness. The poem, in its symbolism, is also a comment of the attitude of humans. Through the message in the poem, the poet wants to convey that people should learn to accept and face the realities of life and move over self-pity.

Plath has humanized the mirror by making it talk about itself-its boredom, its fascination for the wall, its honesty and so on. The mirror says that it is unbiased and has ‘no preconceptions”. It immediately shows the exact reflections of everything that it sees not because it is cruel but because it is “only truthful”.

The mirror considers itself similar to the Almighty. It believes that it is watching over everything from all four corners just as God Watches everyone. The mirror’s most of concentration in the room is on the “pink” wall. The mirror also calls itself a lake. It says that there is a woman that comes every now and then to see her reflection in the mirror.

This woman panics and gets annoyed when she is not able to see a young and beautiful face in the mirror. Narrating her ageing, the mirror says that it has seen her grow old day by day and become “like a terrible fish”. But because the mirror is extremely honest, it cannot deceive her like “the candles or the moon”. It can only show her reflection.

The prominent literary critic, Jo Gill once wrote of “Mirror” that it “exposes the woman’s need of the mirror (and) the mirror’s need of the woman”. This is true in the second stanza of the poem where the mirror asserts its importance for the woman while mentioning that it is this woman that saves the mirror from darkness every morning.

Sylvia Plath’s “Mirror” does not just reflect objects but also reflects its personal understanding about these objects. It also comments on the perennial conflict between people’s inner and outer self. It wants humans to accept harsh realities instead of searching for an illusion. “Mirror” was published posthumously by her husband Ted Hughes in the book called “Crossing the Water”.

One of Plath’s fellow poets, Peter Porter, commented on her collection “Crossing the water” calling it a “perfectly realized work” that shows “a front-rank artist in the process of discovering her true power”. This stands true for “Mirror as the poem is a fairly simple description about a mirror yet full of profound meaningfulness and commentary on life’s eccentricities.

Though the poem “Mirror” is narrated only from the point of view of the “four-cornered” mirror, it also introduces two other characters: the pink wall and the woman. The wall is not described much, apart from the fact that it is pink and is decorated with speckles. Yet, the mirror conveys that it feels as if this wall is a part of its heart. It means that the inanimate mirror has sensitivity and emotion for another inanimate object, the wall. This is apparently in contrast to the insensitive relationships between human beings.

In the later part of the poem, the mirror reveals a woman’s concerns about her appearance and aging as well as her inability to accept an ugly, old-age face. The woman’s agitation upon realizing that she has lost her youth & beauty is also a remark on human beings’ difficulty in accepting the realities of life.

Sylvia Plath is one of most accredited 20th century American poet, novelist and short-story writer. Through her works, she has created a world of metaphors and images while bringing forth extremely psychological insights. Like her other poems, Plath tries to explore personal as well as feminine identity through “Mirror”.

Q. What is the main theme of the Mirror by Sylvia Plath

Ans- The poet emphasized on the Self- Reflection. The poet wants to convey that people should learn to accept and face the realities of life and move over self-pity. Plath has humanized the mirror by making it talk about itself-its boredom, its fascination for the wall, its honesty and so on.

Q. How is the Mirror Described in the Poem?

Ans- “Mirror” has been considered similar to the Almighty. It believes that as the God can see everyone equally, similarly Mirror can watch everything and rendered your true appearance. So, it reflects the exact appearance of your. It is unbiased and has no “preconceptions”.

Q. Why did Sylvia Write Mirror?

Ans- It is not possible to give her exact motive of writing this beautiful piece of work. But it can be said that she wanted to express abstract emotions and a state of mind that cannot easily be captured in prose.

Q. What Lesson does the Mirror convey?

Ans- Through this poem, the poet wants to convey that nothing is permanent in this world, just like beauty fade with the course of time. So, the people should accept the harsh realities of the human beings that everything is temporary i.e. Age, Beauty, materialistic things etc.

Q. What type of poem is Mirror by Sylvia Plath?

Ans- This poem is written in free verse. Meaning, there is no rhyme scheme and any particular meter. Mirror relates to the feminism because it shows the fraught relationship of woman with beauty and aging. Society’s ideal woman is both beautiful and young, so women tend to become more self-conscious as they pass through aging process.

Q. Why is the Mirror important to her?

Ans- In this poem, poet refers the Mirror as the true companion of woman. A woman is with her since her childhood. Mirror is also important because it gives a true reflection of the woman and can see herself every day to have an idea how old she has grown.

Q. How does Sylvia Plath use the Mirror as an image of the poet?

Ans- The poet is also a woman. So, by using a mirror as the speaker of the poem, she explores the life of a woman as she grows old from an outward perspective.

Reads Beyond Mirror of Sylvia Plath Under Literature Listing