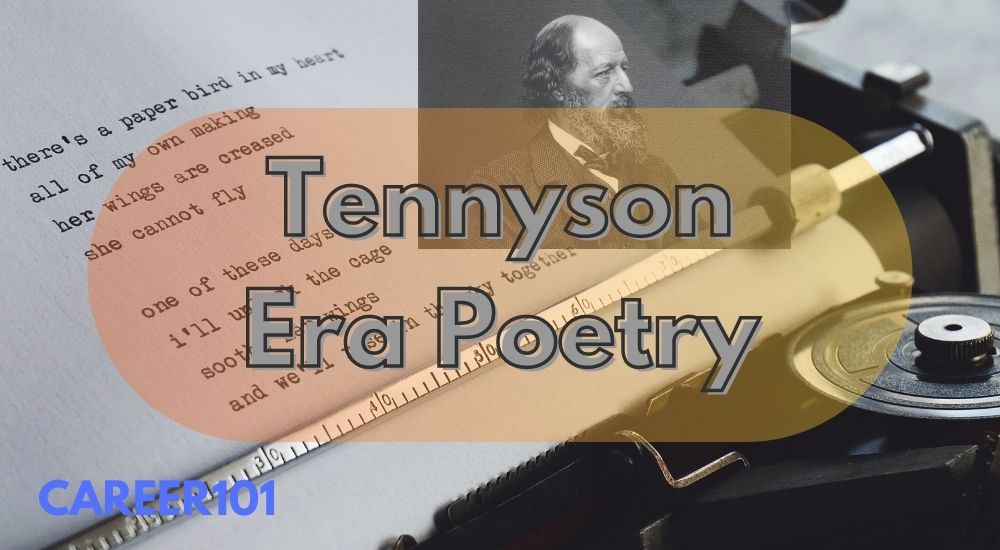 The Main Characteristics of Victorian Poetry

From ‘Idealism to Realism’ is the prominent differentiator of Victorian Poetry while, other characteristics include: mass concerns, morality, challenging authority, questioning God etc. In all, these features had bearing of industrialization and advancement of science & Tech.

The Victorian Poets were quite realistic and had less idealized view of nature in contrast to Romanic Poets who were idealists and believed in Art for the Art Sake. The ‘nature’ in Victorian poetry lost its idealize position accorded in the Romantic Age. Factually, in the Tennyson age, Nature dwindled to a source of leisure and inspiration for the poets. And, that nature was not paramount as subject for poets. Tennyson himself was less a romantic poet and more a Victorian- a bridge to Romanticism & Victorian.

The most remarkable characteristics of Victorian poetry is its conflict between religion and science. It was a byproduct of the intellectual developments of this age. The leading poets of this age reacted to this religious skepticism through their works. Robert Browning attempted to criticize religion in his poems like ‘Fra Lippo Lippi’. He also questioned the demands of the church that go against human nature.

Similarly, When Tennyson wrote ‘In Memoriam’ (1850), he raised many questions on life and death. The scientific approach to nature and human became a central theme in Victorian Poetry. Arnold’s poem ‘Dover Beach’ (1867), also addresses the eroding religious faith of the time.

You would see Victorian poetry as the object of displaying the rural and rustic life. Poets raised voice for indiscrimination against the commoner masses that was done due to industrialization. Victorian poets took a stand of social reform.

Use of Sensory Elements

In the preceding era poets, they used the imagery vividly. However, Victorian poets also used imagery and senses to convey the chaos or struggle between Religion and Science, and ideas about Nature and Romance.

Lord Alfred Tennyson prominently used the sensory and Imagery elements in his poems. One notable example in Tennyson’s poem “Mariana”, he writes- The doors upon their hinges creaked; / The blue fly sung in the Pane; the mouse / Behind the moldering wainscot shrieked.

These images of the creaking door, the blue fly singing in the window, and the mouse with the moldy wood paneling, all work together show a very definite image of an active, yet lonely farmhouse.

Victorian poets understood the misery that industrial Revolution had brought about in the society. Thus, Victorian poetry became object and real; in terms of displaying the urban life. The poets wrote on isolation, despair, doubt and general pessimism that surrounded the era.

On the surface, Victorians seemed to enjoy the wealth and prosperity but the feelings of uncertainty, Cynicism and self-doubt very much reflects in the poems of this age. The issue of psychological isolation is common in almost all the great poems of the Victorian Era.

Tennyson’s poem, ‘Locksley Hall’ (1842) is about the restless “young England”. Mathew Arnold explored the “strange disease of modern life” and the loneliness of modern-age men in his poem ‘The Scholar-Gipsy’ (1853). In ‘The City of Dreadful Night’, Arthur Hugh Clough deals with the note of Insomnia and Pessimism.

Interest in Medieval Fables and Legends

You can mark Victorian Poetry with medieval legends and fables. Just as the Pre-Raphaelites attempted to restore the essence of medieval art in their poems, poets like Tennyson, William Morris and Swinburne wrote poetry on Arthurian legends of the Medieval Age.

Tennyson’s ‘Idylls of King Arthur’ (1859-1889) was a series of four books that were centered on King Arthur and the Round Table. In his other works such as ‘Sir Launcelot and Queen Guinevere’, ‘Sir Galahad’, and ‘Morte d’ Arthur’, Tennyson explored the vision of Medieval quests and tales.

Swinburne idealized Medievalism in his works as the golden Age of tragic love and Tragic Heroism. It is noteworthy that Victorian poets went back to Medievalism not as escapists but in order to redirect it to the contemporary developments in politics, literature and art.

Another one of the most important characteristics of Victorian poetry is sentimentality. The Victorians wrote about artistic creations thus giving way to deeper imaginations. Poets like Alfred Tennyson, Emily Bronte prominently used the element of sentimentality in their poems.

Though the Victorians used medieval settings, forms and themes, many other forms of poetry also held prominence during the Victorian Era. The dramatic monologue became one of the most popular gifts of Victorian Poetry to English Literature.

Through works such as Alfred Tennyson’s “Ulysses’ (1842), ‘St Simeon Stylites’ (1842) and Mathew Arnold’s ‘Dover Beach’ & ‘Stanzas from the Grand Chartreuse’ the monologue seems having gained.

Robert Browning popularized dramatic monologue in most of his works such as ‘My Last Duchess’, ‘Porphyria’s Lover’, ‘Soliloquy of the Spanish Cloister’, ‘Men and Women’ and such others. These poems were published in Browning’s ‘Dramatic Lyrics’ in 1842.

Apart from the famous dramatic monologue, the Victorian poets also explored Sonnets, Epics, Elegies and Ballads. In this way, the Victorian poetry is the direct outcome of the Prevailing socio-economic, political and literary activities of the time.

Victorian Poetry is marked by its own distinct features. This poetry evolved during the reign of Queen Victoria and although it assimilated some of the attributes of Romantic Poetry and era but has clear distinctions.. Instead, being idealistic, the Victorian Poets were highly realistic in their poetic approach.

While, the Romantic poets revered the nature in an idealistic and romantic light in their works, the Victorians had influence of scientific and technological discoveries. Essentially, Romantic era (1800- 1837) ) was movement of being intellectual and artistic and hence their literature had emotional and aesthetic value in high proportions.

A Radical Stream Within Victorian Poetry

When we talk about Victorian Poetry, it is about the broader stream of poetry in Victorian era. However, you somewhere ignore mentioning a group of poets in the very same era who were radical in their poetic approach. They advocated art and mysticism of pre-Raphael era (1428- 1848) or pre-renaissance era. And, narrowed their subject down to beauty, nature and art.

The radical Victorian poetry aimed unifying medieval art and poetry and sought promoting pre-Raphael era glory. Verses of this special stream is called as the pre-Raphaelite Poetry. Experts also label this stream of Poetry as Version 2 of the Romantic Poetry as they immensely harped on nature, beauty, emotions albeit with objectivity.

The Victorian Poets wrote on multiple themes and subjects which is why drawing the line between general Victorian Poets from the Pre-Raphaelites Victorians is a must. Precisely, the pre-Raphaelites poets are a subgroup within broader Victorian Age Poets. And, they focused on beauty, art, loveliness and mysticism alone.

Q. What are three characteristics of Victorian poetry?

Ans- (a) Conflict between Religion and Science, (b) Use of Sensory Elements and (c) Pessimism- are the three characteristics of Victorian Poetry.

Q. Who was the most famous Victorian poet?

Ans- Alfred Tennyson was the most famous Victorian poet.

Q. What are the themes of Victorian poetry?

Q. Who are Victorian poets?