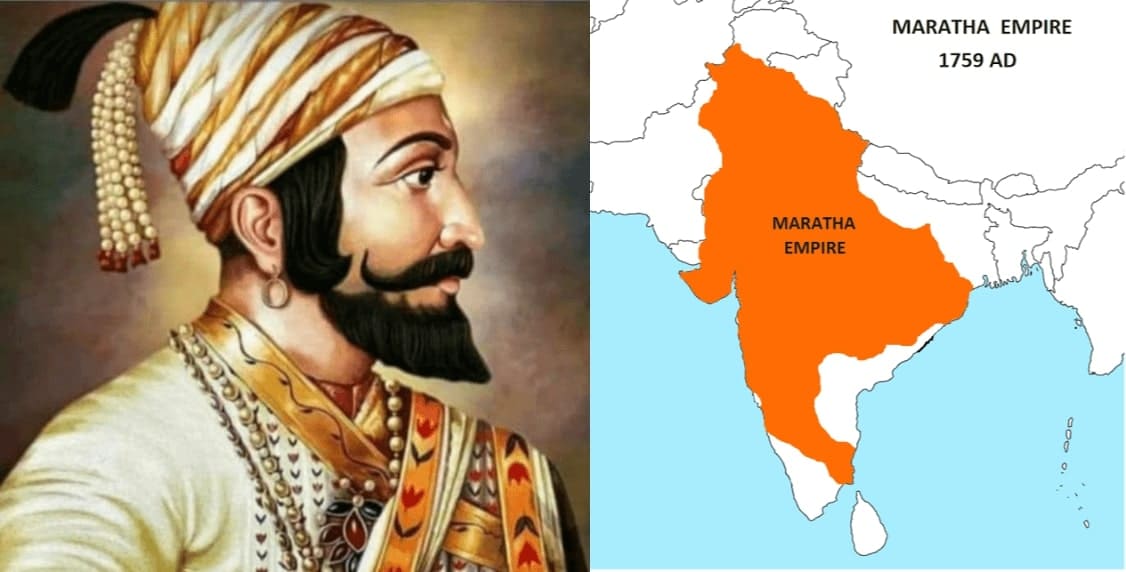 Exploring facts on Maratha Empire or Maratha Confederacy (1674-1818) throws up some really interesting things. The foremost, the Maratha Empire (1674-1818) has more glorious history than ever written. Inspiration for Indian Navy and the first Hindu Sovereign state, the Martha Empire offers a lot to history enthusiasts.

Maratha Empire aka Maratha Confederacy was a ruling regime spanning across a large portion of the Indian subcontinent in the 18th century. The existence of the Empire starts from 1674 with the coronation of Shivaji as the Chhatrapati and seems co-terminating with the defeat of Peshwa Bajirao II in the hands of the British East India Company in 1818.

In 1674 Shivaji was  coronated at capital Raigarh and assumed the title of Haindava Dharmodharak (protector of Hinduism). Shivaji came from Bhonsle Maratha clan. Ending Mughal reign and bringing Hindu Swarajya was one major objectives of Marathas. Accordingly, they fought hard against the Mughal reign and succeeded to a great extent. Hence, history accords the Maratha credits of ending Mughal rule and bringing Hindu Swarajya in India.

Who Were the Marathas, Central to The Maratha Empire?

The history identifies Marathas as a Marathi-speaking warrior group from the Western Deccan Plateau (present-day Maharashtra) who shot to prominence by founding a Hindavi Swarajya (meaning “self-rule of Hindu/Indian people”). Obviously, the Marathas gained prominence in the 17th century under the leadership of Shivaji Maharaj and subsequent Hindu rulers.

Shivaji revolted against the Adil Shahi dynasty, and set up his own kingdom with Raigad as its capital. His father, Shahji had earlier conquered Thanjavur which Shivaji’s step-brother, Venkoji Rao alias Ekoji inherited this territory called as Thanjavur Maratha kingdom. Thanjavur Marathi was the regional dialect for this kingdom.

Marathas, on account of a great warrior quality had been able to consolidate their territory during the Mughal–Maratha Wars. They, at peak of empire controlled Tanjavour to Attock (in current Pakistan) .

Maratha power under Shivaji and in later years until the Peshwas acquired Military Power, was a centralized state, precisely an empire. Period of 1674- 1720 marks the era of such Empire. However, post 1720 AD the Maratha Empire saw meteoric expansion and devolution of power to Peshwas and Knights was felt necessary to manage the state affairs making the regime a confederacy.

For the most part of 18th century, Marathas were the strongest ruling force that controlled major part of India. It was the last of the Indian kingdoms to be defeated by the British colonial regime. Importantly, even after the defeat of the last Maratha ruler, the area ceded by him was treated as a separate administrative unit for almost a decade.

1.Born at Shivneri Fort in 1627.
2. His father’s name was Shivaji Bhonsle and mother’s name was Jija Bai. His Religious Teacher was Samarth Ramdas.
3. Shivaji inherited the Jagir of Poona from his father in 1737.
4. After the death of his guardian, Dadaji Kondadev in 1647, he assumed full charge of his Jagir.

7. Shaista Khan, governor of Deccan was deputed by Aurangzeb to put down the rising power of Sivaji in 1660. Shivaji lost poona and suffered several defeats  till he made a bold attack on Shaista Khan (1663) and plundered Surat (1664) and later Ahmadnagar.
8. Raja Jai Singh succeeded in besieging Shivaji in the fort of Purandhar. Consequently, the treaty of Purandhar (1665) was signed according to which Shivaji ceded some forts to the Mughals and paid a visit to the Mughal court at Agra.

9. In 1674 shivaji was coronated at capital Raigarh and assumed the title of Haindava Dharmodharak (Protector of Hinduism).
10. After that Chhatrapati Shivaji continued the struggle with Mughals and Siddis (Janjira). He conquested Karnataka during 1677-80.

11. Shivaji divided his territory under his rule (Swaraj) into three provinces, each under a viceroy. Provinces were divided into prants which were subdivided into pranganas or tarafs. The lowest unit was village headed by Patel (Headman).
12. Shivaji was helped by ashtapradhan (eight minister) which was unlike a council of minister, for there was no collective responsibility, each minister was directly responsible to Shivaji.

Sambhaji (1680-89)- The Second Chhatrapati of the Maratha Empire

13. Sambhaji, the elder son of Shivaji. He defeated Rajaram, the younger son of Shivaji in the war of succession.
14. He provided protection and support to Akbar II, the rebellious son of Aurangzeb. 15. He was captured at Sangameswar by a Mughal noble and executed.

16. He succeeded the throne with the help of the minister of Raigarh.
17. He fled from Raigarh to Jinji in 1689 due to a Mughal invasion in which Raigarh was captured along with Sambhaji’s wife and son (Sahu) by the Mughals.
18. Rajaram died at Satara which had become the capital after the fall of Jinji to Mughal in 1698.

19. Rajaram was succeeded by his minor son Shivaji II under the Guardianship of his mother Tarabai.
20. Tarabai continued the struggle with Mughals.

21. shahu was released by the Mughal Emperor Bhahdur Shah.
22. Tarabai’s army was defeated by Shahu at the battle of Khed (1700) and Shahu occupied Satara.
23. But the Southern part of the Maratha kingdom with its capital Kolhapur continued to be under the control of descendents of Rajaram (Shivaji II and later Sambhaji II).

24. Although five Peshwas had preceded to Balaji Vishwanath, but they largely acted as head of council of ministers, Military administration was not their authority. Shahuji for the first time appointed Balaji Vishwanath with military control in Peshwa’s hands. Basically, it was a return of favour wherein, Vishwanath had helped Shauji grabbing the throne from his aunt Tarabai.
24A. He began his career as a small revenue official and was given the title of Sena Karte (marker of the army) by Shahu in 1708.

25. He became Peshwa in 1713 and made the post the most important and powerful as well as hereditary.
26. He played a crucial role in the final victory of Shahu by winning over almost all the Maratha Sardars to the side of Shahu.
26A. Balaji Vishwanath was from a Bhat Brahmin and introduction of non-Marathas started from him.

The Era of Maratha confederacy starts from 1720 as the empire expanded many times transcending many sovereign territories. Entrusting power in the able hands of Bhat Brahmin Peshwas and death of Aurangzeb in earlier in 1707 were the reasons behind. And, Shahu ji was at the helm of this great expansion though as a figurative head.

Shahuji decided to expand with armies under the Peshwas’ control. Expansion took place but after his death (1749) Peshwas became the effective rulers. The leading Maratha families—Scindia, Holkar, Bhonsle, and Gaekwad all extended their conquests in northern and central India but grew more independent and difficult to control. Thus, Maratha confederacy started taking shape.

Marathas evolved arrogant with expansion and failed to keep Jat and Rajput under flock. Thus, they met with decisive defeat of Panipat (1761) at the hands of the Afghans. The death of the young Peshwa Madhav Rao I in 1772 added blow to maratha empire. The Peshwas had got weakened after death of Sadashiv Rao Bhau Peshwa in Pnaipat III and the differences of Maratha generals with Peshwa just went on rising.

It was Madhav Rao I who had tried consolidating the empire by giving considerable autonomy to the stronger Knights of Peshwas (of Pune), Gaekwads (of Baroda), Holkars (of Indore), Scindias (of Gwalior) Bhonsales (of Nagpur) and even within Original Kingdom of Shivaji. Thus, such developments turned Maratha Empire into a confederacy of five/six chiefs under the nominal leadership of the Peshwas of Poona.

Subordination to Peshwa was not acceptable equally to the all besides infights. Especially, the Holkars were strongly averse of Peshwas mainly on policy lines. So, they defeated Peshwa Baji Rao II and Scindia Supporting him in a provoked battle, the battle of Poona 1802. Unwisely, Peshwa Baji Rao II sought protection from the British. However, an invited intervention from British destroyed the Maratha confederacy by 1818.

27. Baji Rao I, the eldest son of Balaji Vishwanath succeeded the him as Peshwa at the young age of 20.
28. He was considered the greatest exponent of guerrilla tactics after Shivaji and Maratha power reached its zenith under him.
29. Under him several Maratha families became prominent and got themselves entrenched in different a part of India.
30. After defeating and expelling the Siddis of Janjira from the mainland (1722), he conquered Bassein and Salsette from the Portuguese (1739).

31. Popularly known as Nan Saheb, he succeeded his father at the age of 20.
32. After the death of Shahu (1749), the management of all states affairs was left in his hand.
33. In an agreement with the Mughal emperor Ahmad shah, the Peshwa was to protect the Mughal empire from internal and external enemies (like Ahmad Shah Abdali) in return for Chauth (1752).

36. First Anglo-Maratha War (1775-82): Favouring the cause of Raghunath Rao (Raghoba) for Peshwaship, English (Hastings) came in conflicts with the Marathas. On being defeated, the British had to sign the humiliating Convention of Wadgaon (1779).
37. British later signed Treaty of Salbai (1782), renouncing the cause of Raghoba.
38. Second Anglo-Maratha War (1803-06): The Maratha Peshwa signed the Subsidiary Alliance Treaty of Bassein (1802).

39. The Maratha confederacy which did not like the idea challenged the British power but were defeated by the British.
40. The Anglo-Maratha War (1817-18): Lord Hasting was determined to proclaim British paramountacy in India. Hastings moves against Pindaris transgressed the sovereignty of the Maratha chiefs and the war began.
41. The Marathas were decisively defeated.

Who is the Father of Indian Navy?

Emperor Chhatrapati Shivaji Maharaj is father of Indian Navy. Providing for defence of coastline was his brainchild. Kanhoji Angre, aka Conajee Angria aka Sarkhel Angre was the most powerful chief of Maratha Navy (Admiral). Years after death of Shivaji in 1680, he was appointed as Sarkhel or Darya-Saranga (Admiral) by the chief of Satara around 1698. Western coast of India from Mumbai to Vingoria (now Vengurla) of today’s Maharashtra came under his authority. He kept the British, Dutch and Portuguese ships at bay, captured them and collected heavy taxes as well.

What Was the Expanse of Maratha Empire at its Peak?

Marathas Empire spanned from Tanjavur [In Tamil Nadu] to Attock [In Pakistan] at its peak.

What the Term Chhatrapati and Peshwa Stood for?

What Was the Typical Warefare of Marathas?

Guerrilla Warfare was the specialty of Marathas. They managed to beat many enemies and Mughals could never defeat Maratha kingdom.

Maratha Empire grew later a Confederation of kingdoms like Peshwa in Pune, Shinde/Scindia in Gwalior, Bhosale at Nagpur, Gaikwad at Baroda and Holkar at Indore.

Which Maratha Kingdom Was the Last Powerful One?

Scindias! Mughal Emperor Shah Alam II (1759- 1806) lived under the protection of the powerful Scindias of Gwalior (a Maratha Kingdom) until Marathas were defeated by British in 1818.

Mahadji Shinde kept Mughal Emperor merely a puppet after they won Delhi (1771- 72). It was almost 10 years later the 3rd Panipat Battle in 1761 which had weakened the Marathas.

What Strange About Loyalty to British of a Maratha Kingdom is?

The loyalty of Marathas was underlined by Lord Canning after 1857 revolts by saying “If Scindias of Gwalior did help the rebellions, perhaps it would have been the End of our affairs here”. But, supporting British in 1857 is a scar on original ideology of Marathas

In fact, with progressing timeline, the kingdoms of Marathas, got into Jealousy, Internal Rivalry and infighting. And, the British took advantage of weaknesses defeating Marathas in 1818 and later used Scindia to their advantage esp. in 1857.

What is interesting about Maratha Infantry?

Are Shivaji’s Descendants in Politics?