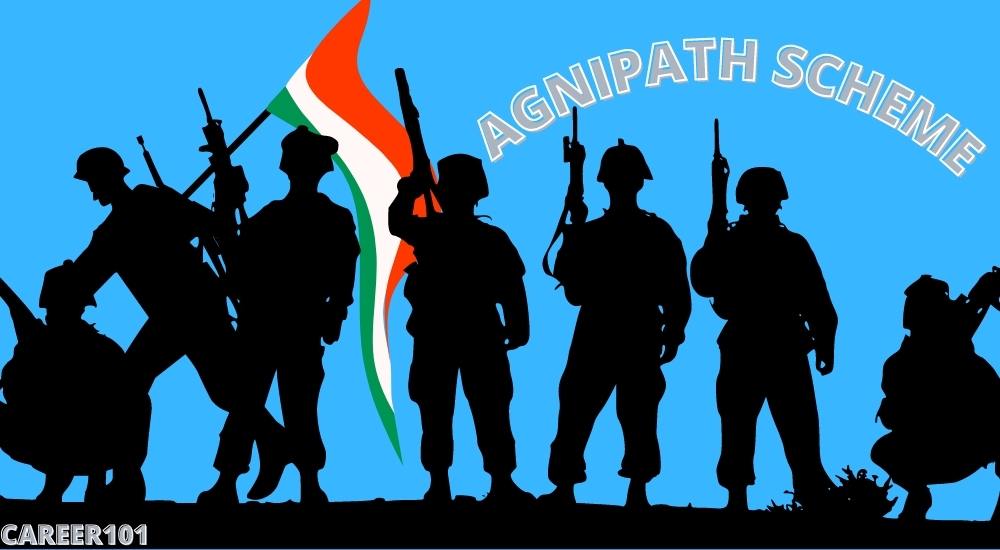 Agnipath Scheme introduces ToD model recruitment of the youths in Indian Armed Forces for non-commissioned ranks called Agniveers, initially for four years. After four years of service in Navy/ Airforce/ Army, 25% of agniveers are to be absorbed in permanent services. The policy is facing backlashes broadly on apprehensions that it might bring down the spirit of youths to join the Defence services.

Unexpectedly, the new recruitment scheme, i.e, Agnipath, has sparked protests all over the country. To appease the anger & aggression against Agniveer Yojana, the government has brought in some changes to the scheme. However, the announcements & assurances seems doing little to dilute the agitations. The article has tried to cover critical aspects of the Agnipath scheme, please keep reading.

What Agnipath Scheme is All About?

On June 14th, 2022, the government of India rolled out Agnipath scheme for the aspirants who wished to join the Indian Armed Forces. The Yojana entails the recruitment of individuals for all three Indian military services, viz. Navy, Army & Airforce. Personnel under this scheme will be commissioned below the officer ranks.

Moreover, the PM Modi-led cabinet committee has issued a statement under which it has been enumerated that at least 45k to 50k Military forces will be deployed every year. It is a mega-driven & recruiting scheme for aspirants who wish to join the Indian Armed Forces.

Talking about the same, the recruiting process of at least 46,000 sailors, soldiers, and airmen will begin on an “all-India, all-class” basis from September 2022. The candidates who get selected under the scheme will be called Agniveer.

The Agniveer Yojana is short-term basis recruitment of the personnel. Under the scheme, it has been mentioned that aspirants will be recruited for only four years. However, the Yojana also points out that 25% of the total recruitment of the aspirants annually will also be allowed to join the permanent commission.

The government will create a fair & unbiased assessment system for this 25% recruitment in the permanent commission. And, on the basis of a centralized assessment system, the person in-service for four years will be selected for 15 years in the Armed Forces across the three services.

Why Aspirants Demanding for Rollback of Agnipath Scheme?

The day after announcing the Agnipath Yojana, the aspirants who wish to be enrolled in the Indian Armed forces have come out on the streets in numerous cities & districts. The more aggressive & violent protests have been witnessed in the Bihar, Uttar Pradesh & Haryana States. Protesters coming on the street have started to vandalize several government properties like railways, Buses, Offices, etc. They are adamant about scrapping the scheme.

The aspirants miffed with Agniveer Yojana described several downsides of the scheme. Talking about their response, a group of protesters claims that the new age bar will restrict many from enrolling in military service. In the earlier system, the age bar was between 16.5 years to 21 years, and now in the Agnipath scheme, the aspirants with an age group between 17.5 to 21 years are only eligible to join the service.

Not only age bar is the reason, but aspirants are also protesting against the scheme & claiming that this new Yojana eliminates the pension system, which was given after retirement from the 15 years of service. The agitators also express their grief by saying that what they will do after 4 years of tenure is over. This new scheme is bypassing many things, including long tenures, pensions, and other benefits which were there in the old system.

Therefore, from the day Agniveer Scheme is introduced, the aspirants are insisting the government scrap and retain the old recruitment system for the service in the Indian Military. Taking the demonstration into cognizance, the PM-led government & three Indian Armed forces chiefs have come out to assuage the protesters. Upon addressing the concern of the youth, the BJP parliamentarian members promised to offer benefits to the 75% of personnel who return to the civil society after completing 4 years of limited service.

What are the Steps Taken by the Govt. to Pacify Aspirants?

In response to the agitation, the government has tried its every inch to dilute the anger & aggression against the Agniveer Yojana. While addressing some of the concerns around the Agnipath Scheme, the minister of Home Affairs promises to reserve 10% vacancies for Agniveers under the Agnipath scheme in the CAPF & Assam Rifles. Concerning the age bar issue, the PM Modi-led government had increased the Upper Age Limit.

Moreover, the government counts several advantages of the scheme to the aspirants. Talking about the same, the Agniveers will be offered 30 thousand per month in the first year of service, and the salary will increase in the subsequent years. Reportedly around Rs 40,000 per month during the fourth year of service will be earned by the Agniveers.

Apart from that, the Agniveers will even get around 11.5 lakhs as a Seva Nidhi package after the completion of 4 years of service & their exit from the Indian Armed Forces. The scheme also includes non-contributory life insurance for the participants. In case Agniveers in line of duty died, then their family would get Rs. 48 Lakhs.

The government also assured the aspirants that it helps to obtain the 12th certificate and earn the bachelor’s degree from IGNOU during the service period. And upon completion of 4 years tenure of service, the government will also help the soldiers to secure education loans for higher study.

Q. Who is Eligible for Agniveer Yojana?

Ans- Individuals between 17.5 years to 21 years (Upper age limit- 23 Years has been prescribed after the escalation of anger against the Scheme rose high) are eligible to apply for the Agniveers under Agnipath Scheme.

Q. What are the Eligibility Criteria to Become Agniveer?

Ans- (a) The exam for Agniveer will be held all over India for all classes of candidates. For this, aspirants must be between the age of 17.5 years to 21 years.
(b) The candidates must pass the medical test as per the standards set by their respective Armed Forces.
(c) Agniveers will have to complete the 6 months of training as per the requirement of the respective Armed Forces.

Q. Is the Agniveer scheme open for women?

Ans- Yes, Agniveer Yojana is also open for women. It was pointed out during the announcement of the Scheme.

Q. Can Agniveer leave the Armed Forces before completion of tenure?

Ans- No, as per the rules & regulations prescribed under the Scheme, Agniveers will not be allowed to leave the Armed Forces until the four years tenure is over. However, the Competent Authority may allow it on a case-to-case basis.

Q. Is there any provision of compensation in case of disability or death?

Q. What about those candidates who have passed the medical and physical test for recruitment in Armed Forces and currently waiting for exams?

Ans- All the recruitments in the Indian Armed Forces will be done via Agniveer only. Those candidates who have passed the medical & physical test would have to reapply based on their eligibility.

Q. What will happen to Agniveers after four years of service?

Ans- Under the Scheme, at least 46k candidates will be admitted into the Indian Armed Forces annually. Among this significant figure, 25% of soldiers will be retained on the basis of the centralized assessment system. And the remaining 75% will return to civil society. After completing the tenure of 4 years, those wishes to join Central Armed Personnel Forces & Assam Rifles will be given preference, assured by the Ministry of Home Affairs. Agniveers can also go for higher studies & for this, the government will help them secure education loans.