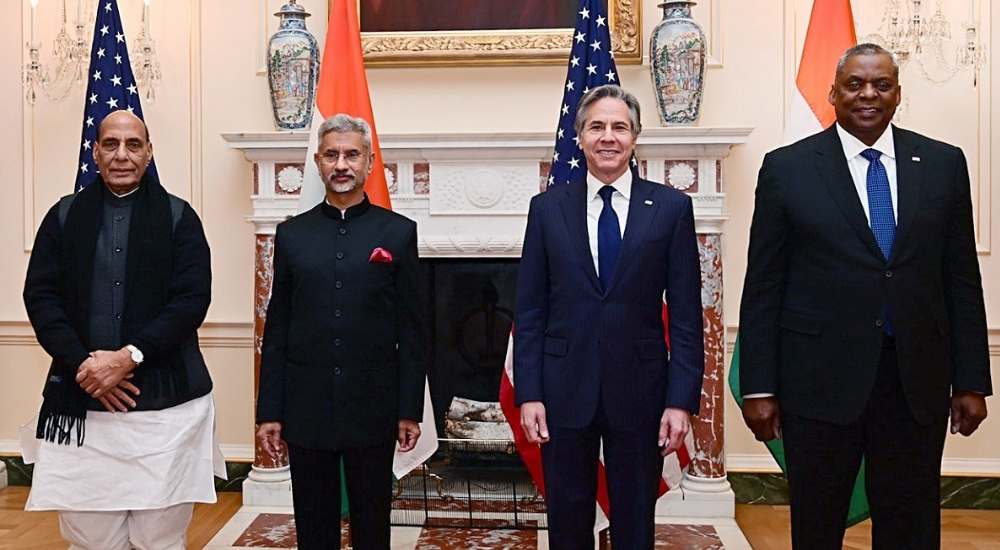 If you are unaware of what the fourth 2+2 meet with US is, let me give you a primer. Basically, it was a meeting of Indian External affairs Minister and Defense Minister with their US Counterparts Antony Blinken and Lloyd Austin in Washington. In the said meeting, Dr. S. Jaishankar has been at the helm for many valid reasons. Please read on to know more!

Before the 4th 2+2 meet with US took place, US President Biden in virtual meet with PM Modi tried to set the tone of 2+2. Implied message was to ensure India;s support for US stand on Russia- Ukraine ongoing War.

Even Before, NSA Daleep Singh and Under Secretary of State Victoria Nuland had already communicated two clear message for India: i) Not to buy discounted Oil from Russia and ii) Stop defence equipment purchases from Russia.

During the 2+2 meeting, the US Secretary of state also highlighted these two broader concerns of America and sought India’s support for US approach in to Russia- Ukraine War.

In joint press conference after the meet, however S. Jaishankar took the opportunity to clarify India’s Stand. He told that India has very decent sense of what is in their Interest and how to take that further. In a sense, Jaishankar told that India’s foreign policy cannot be influenced.

Referring to the stats, he told US should do some introspection and look into what their European allies are doing. Precisely, what India is buying in a month from Russia, the Europe is buying in one afternoon. And that, India should not be targeted for allegedly supporting Russian Interest. India has some basic energy concerns and will be met through continued business ties with Russia. India is buying only 2% of its Energy needs from Russia.

EAM Dr. S. Jaishankar very diplomatically added that decades earlier there was no option before India but to go with Russia but today India has voluminous trade with US including India being a major defence partner of US. Further, the world order is changing and so the US should also hope an upping of relationships. It is thus, not fair to blame India for safeguarding its interest.

In fact, news has been rife that USA itself has purchased the discounted oil from Russia and resold it for higher prices. Also, the European oil purchases from Russia in March 2022 has been 15% up from that of February. Amid the circumstances Jaishankar’s retort to US being seen as if India is NOT about to toe the line of any power.

1.”We watch what’s happening in the world, like any country does, and we draw our conclusions and make our assessments. And believe me, we have a decent sense of what is in our interest and know how to protect it and advance it,”

This is exactly what EAM Jaishanakar replied, in response to criticism from US on the issue of India’s not condemning Russian aggression and continued business ties with Russia.

2. “If you’re looking at (India’s) energy purchases from Russia, I’d suggest your attention should be on Europe. We buy some energy necessary for our energy security. But I suspect, looking at figures, our purchases for the month would be less than what Europe does in an afternoon.”

This what exactly Indian EAM Jaishankar told the reporters insisting to clarify India’s stand in the midst of whole world standing against Russia and severing business ties with Russians.

The meeting covered many agenda points including terrorism and climate change but it seems R- U war in the centre. You can check insightful statements on other issues made by EAM after the meet at economic times.

Interestingly, What went by in 2+2 meet with US has lot to do with the recent past. Without looking into the backdrop you cannot claim to understand the India’s stance and its likely impact on global affairs. So, let me narrate the entire things under two major developments that happened during a week or two earlier.

US Remarked Earlier But S. Jaishankar Chose NOT to Comment

Both S. Jaishankar & Antony Blinken had got into talks before 4th 2+2 twice, on the recent development in Ukraine and India- US bilateral ties. The first one was especially in the backdrop of disquiet in Europe after India’s inclination to buy discounted crude oil from Russia.

White house had sensed that India is not going to move the US way. Accordingly, president Biden criticized India as “somewhat shaky” among the quad members.

U.S. Deputy NSA Daleep Singh only a week before had cautioned stating that the moves of the countries to “circumvent or backfill” American sanction on Moscow is likely to meet consequences. Especially, adding that the US will never want India doing any substantial import from Russia.

MEA or EAM Dr. Jaishankar, in particular however chose NOT to comment on US remarks for India and its Stand.

Jaishankar Also Had No Comments after Lavrov Visit

The possible Non- Dollar Trade which is feared by US & Europe amid Lavrov visit to India also did not prompt Jaishankar comment. Not even, after Lavrov saying that Russia and India are looking at ways to “bypass” the sanctions imposed by the US & EU which was kind of drawing India into new controversy.

In fact, a week before 4th 2+2 meet with US, the Russian Foreign Minister Sergey Lavrov also visited India. And, Lavrov after the talks with Indian Counter parts spoke to reporters saying that the India-Russia partnership would not change in the face of any pressure.

Lavrov further added that both countries are ironing out the ways to trade in national currencies. Although, no joint declaration from Indian side has come up yet, but a team from Russia’s central bank has already met RBI governor and the things gives a hint of the sort.

Russian FM put in more clarification saying “The reason for moving to national currencies is the absolutely unreliable nature of our western counterparts. We don’t want to depend on the system which could be closed anytime, whose masters can steal your money overnight,”

Clearly, Lavrov clarification seems inspired from the US and its allies’ decision to oust Russian banks from the global SWIFT payment system, and to freeze Russia’s foreign reserves.

Lavrov, made certain other remarks too including that Russia, India China will not bow to the West & US hegemony. Also, adding that there is no war between Russia and Ukraine, it is instead military operation with no intention to harm civilians.

Dr. Jaishankar seems not influenced by high and mighty nor by India’s old companion. His responses at the 4th 2+2 meet are seen carving a distinct paradigm for India in international affairs.

Although observing basic premises of non-alignment philosophy, Jaishankar’s India seems capable of accommodating within the new dynamics of power. It will be interesting to see the developments under his leadership.

Concluding Words on What Transpired in 2+2 meet

Dr. Jaishankar has been an IFS officer who to the service through UPSC exam, the toughest one in India. He has a long expertise of dealing with external affairs as ambassador and high Commissioner representing India. So, the aptitude showcased by a diplomat turned politician is no surprise. You cannot compare Political leaders having little or no formal education with an IFS having vast exposure.

The US Secretary of State Tony Blinken had to acknowledge that “India’s relationship with Russia was developed over decades at a time when the US was not able to be a partner of the South Asian country. This clearly shows that S. Jaishankar has very well conveyed the India’s stance on global issue: i.e, Russian- Ukraine war. It is safe to say that India needs more such politicians to showcase its Independent foreign policy and furthering strategic partnerships with like minded democracies.

Reads Beyond Fourth 2+2 Meet with US Under Current Affairs

1 thought on “India’s Fourth 2+2 Meet With US and The Role Played by EAM Dr. S. Jaishankar”