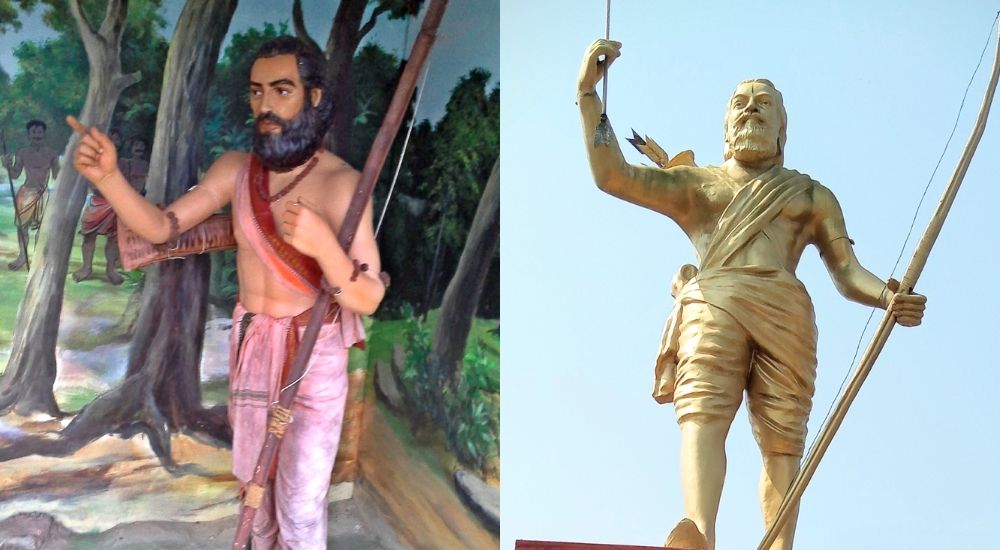 Alluri Sitarama Raju was a legendary freedom fighter of India, who participated in the Indian independence movements and laid down his life to free mother India from the British Raj. He fought against the British force like a courageous soldier, for 2 years without any help from state powers.

He got involved in the fight against the British, in response to the 1882 Madras Forest Act, which effectively restricted Adivasis (tribal groups’) freedom of movement in their forest habitats and prohibited them from engaging in a traditional kind of cultivation known as podu.

Alluri Sitarama Raju formed his own army to assassinate well-known British officials in South India after being motivated by the Gandhian non-cooperation movement.

The official websites of India claim that Alluri was born at Bhimavaram tehsil in Andhra Pradesh, but a number of online media sources had identified his birthplace as the village of Mogallu in the West Godavari District. Some sources claimed that he was born in the Bheemunipatnam legislative assembly constituency, namely in the village of Pandrangi.

His mother Surya Narayanamma was a devout homemaker, and his father Venkata Rama Raju was a professional photographer who settled in Rajamundry for his job.

His father was a free-spirited individual who cherished his independence and had a high sense of self-respect. Once, his father scolded him in his childhood for following the then-common practice of saluting Europeans in order to acknowledge their superiority.

After finishing elementary education, he enrolled in high school in Kakinada, where he made friends with Madduri Annapurnaiah (1899–1954), who went on to become another well-known Indian revolutionary. His father passed away when he was just 8 years old.

After his father’s demise, he was nurtured at Narsapur, in the West Godavari district, by his uncle “Rama Krishnam Raju,” a tehsildar. Alluri, along with his sister and brother, moved to Vishakhapatnam, his mother’s birthplace, after completing his schooling at Taylor High School.

In Vishakhapatnam, He began his studies at the “Mrs. A.V.N. College” and left after his fourth year. He frequently travelled to remote areas of the Visakhapatnam district where he got to know the difficulties the local tribal people faced.

Around this time, he made a rich guy his friend and fell in love platonically with Sita, his friend’s sister, whose unexpected death broke his heart. In order to make her memories eternal, Sitaram Raju subsequently added her name to his, becoming known as Sita Rama Raju.

At the age of 18, Alluri became an ascetic known as a sannyasi. At school, he studied astrology, herbal medicine, palmistry, and horseback riding.

Growth of Alluri Sitarama Raju as a Leader

Alluri had all the leadership qualities inside him since his childhood. Some incidents and activities of his life are ample to show his leadership. In his schooling days, Alluri often used to ride his uncle’s horses to distant hilly places to learn about the issues that tribal peoples were facing, under British colonial rule.

Observing the struggles of the Koyas, a hill tribe greatly impacted him. He loved to travel on pilgrimages, so when he was in his teens and had finished his education, he went to Gangotri and Nasik, the birthplaces of the Ganga and Godavari.

He then made his home in the Papi hills, near Godavari District where the population of tribal people was high. To develop his moral character and spiritual strength, Sitarama Raju started practicing spiritual discipline. At that time, he was irritated by Christian missionaries’ attempts to convert the hill tribes. He saw it was done to sustain Imperialism.

He continued to live his life in a very simple way with tribal peoples. His attractive personality drew the attention of the tribal people as well, and it appeared to them that he was a sacred figure and had magical powers.

The non-cooperation movement, led by Gandhiji, influenced him a lot. Sitaram Raju organized Panchayats and began addressing neighbourhood conflicts among themselves to give this movement momentum. Sitaram Raju inspired the people to take part in the “Non-Cooperation Movement” by assuaging their fear of British authority.

After some time, Sitaram Raju turned away from Gandhiji’s beliefs and founded a military force. He turned the entire Rampa region into the epicenter of the revolution. Malabar’s mountainous terrain was ideal for guerrilla battle. In addition to this, the locals gave them their wholehearted support.

They were surrounded by those who gave their lives for the movement. Gam Mallu Dore and Gam Gautam Dore brothers were appointed lieutenants in Gudem in order to advance the revolution. To amplify the movement, they required contemporary weapons.

Sitaram Raju already had a clear understanding that challenging British forces Using a bow and arrow is not going to be easy. As a result, they started robbing police stations.

Alluri was an expert in performing risky raids to rob police stations of arms and ammunition in the tribal backwoods of Rampachodavaram, Addateegala, Devipatnam, and Rajavommangi in what is now Andhra Pradesh’s northern region. Every time after raids, he used to leave a note inside the police station, explaining what was being taken away.

In 1992, Sitarama Raju initiated the Rampa Rebellion movement. He encouraged the Eastern Ghats tribes to rise up in protest against British tyranny. From August 1922 to May 1924, he led the Rampa rebellion with unmatched bravery and courage, which was one of the most powerful uprisings to have opposed colonial rule in the subcontinent.

He played a significant leadership role in the Rampa Rebellion of 1922. He launched guerilla campaigns against the British colonial authority in the border areas of the East Godavari and Visakhapatnam districts in the Madras Presidency by organizing a group of farmers, Adivasis, and supporters of their cause.

How did Alluri Sitarama Raju Die?

The rebel group’s leader was Alluri Sitarama Raju, while the commander of the “Assam Rifles” was Upendra Patnaik. Both sides of the army lost a lot of soldiers. The British managed to capture Alluri in the Chintapalle forests after putting out a valiant effort for almost two years.

Even though Sitarama Raju’s forces were few at the time, a military officer by the name of “Gorati” chained him to a tree and opened fire on him on May 7, 1924, in the village of Koyyuru. The British government was still subject to insurgent campaigns even after Alluri Sitarama Raju’s sacrifice.

This way, the courageous soldier who defeated the British force for nearly two years, became a martyr. Everyone has acknowledged the young Alluri’s valiant efforts in fighting one of the most powerful empires in a full-scale war without the support of any state powers.

Q. What is the Slogan of Alluri Sitarama Raju?

Ans: “Vande Mataram” was the slogan of Sitarama Raju.

Q. What is the Caste of Alluri?

Ans: He belonged to a Telugu Kshatriya family.

Q. Who was Alluri Sitaram Raju?

Ans: He was an Indian freedom fighter, widely known as ‘Manyam Veerudu’ (hero of the forest).