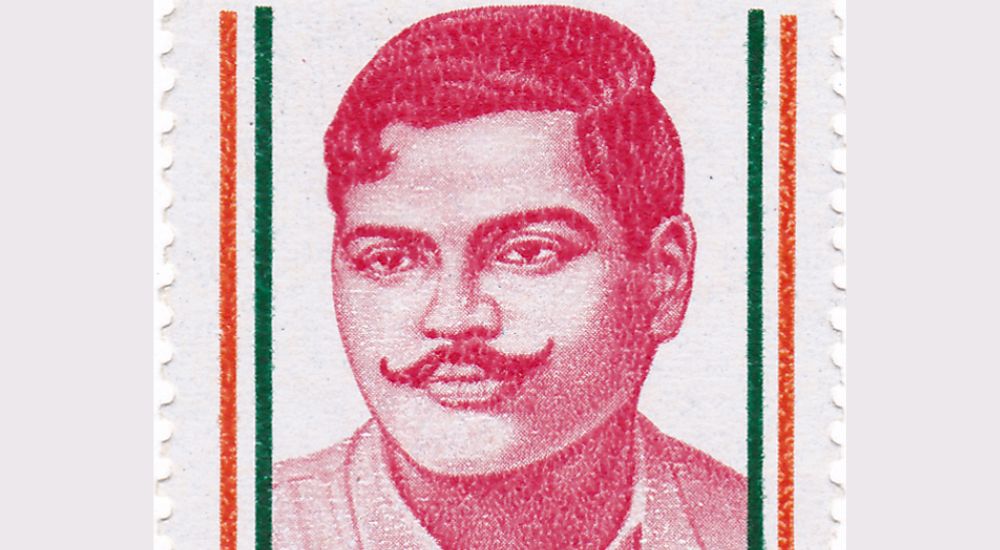 Azad’s inclination to the freedom movement starts from a very early age. His lifelong objective was to cause the British Government as many problems as he could.

His well-known statement, “Dushmano Ki Goliyon Ka Saamna Hum Karenge, Azad Hi Rahe Hain, aur Azad hi Rahenge”, which means “I shall confront the bullets of the enemies, I have been free, and I’ll be free forever,” is an example of his type of revolution.

He encouraged his peers to feel a strong feeling of nationalism and accepted martyrdom like an old friend. Azad, a contemporary of Bhagat Singh, didn’t exactly get the same level of adoration for his efforts and deeds, but they were no less heroic.

Chandra Shekhar Azad was born on July 23, 1906, in Bhavra village in the Jhabua (present-day Alirajpur) district of Madhya Pradesh. He completed his early education at Bhavra.

His mother, Jagrani Devi convinced his father, Sitaram Tiwari to send him to Kashi Vidyapeeth, Banaras, to study because she wanted her son to become a renowned Sanskrit scholar.

For further studies, he went to Kashi Vidyapeeth. Chandra Shekhar learned archery, swimming, and wrestling while growing up among the local Bhils.

From an early age, he was a devoted disciple of Lord Hanuman. He used to practice javelin throw in his childhood and developed an attractive physique.

Chandra Shekhar was a mischievous child who enjoyed being outside. He was an ordinary student, but after moving to Benares, he met other young nationalists.

He got interested in revolutionary movements at a very young age. Azad was an expert at disguising himself, and also evaded himself multiple times from the British police.

At the age of 15, he took part in Gandhi’s non-cooperation movement in Banaras in 1921 and he was jailed too. The participation of Azad was basically to voice against the Jallianwala Bagh massacre, in 1919.

He gave his name as “Azad” (Urdu: “Free” or “Liberated”) his father’s name as “Swatantrata” (Independence), and his place of residence as “Jail” when he was brought before the Parsi district magistrate Justice M. P. Khareghat a week later. The furious magistrate gave him a 23-week sentence in prison and a daily punishment of 15 lashes.

Following this incident, he adopted the surname Azad and changed his name to Chandrashekhar Azad.

The 1919 Jallianwallah Bagh Massacre, a terrible act of British cruelty impacted Chandra Shekhar from deep inside. Basically, it was this incident that flared his nationalistic fervor.

The British government’s blatant violation of fundamental human rights and unjustified use of force against a group of unarmed and peaceful individuals sparked an outpouring of anger among Indians.

The infamous Jallianwallah Bagh incident engulfed the country with anti-British euphoria. And, great revolutionaries like Chandra Shekhar decided to push the Britsh out of India.

Azad was already a member of a group of young revolutionaries whose sole aim was to obtain freedom for the motherland India.

In February 1992, Mahatma Gandhi suspended the Non-Cooperation movement as a result of the Chauri-Chaura incident, which hurt Azad’s nationalist beliefs.

He, therefore, came to the conclusion that a big strategy would be more successful in accomplishing his goal. He had many encounters with young Indian revolutionary leaders during this time.

After joining the Hindustan Republican Association, he started collecting money for it. The remaining funds are obtained through robberies on government property. In 1925, he participated in the Kakori Train Robbery.

He killed J.P. Saunders in 1928 as revenge for Lala Lajpat Rai’s killing in Lahore. In 1929, he also made an attempt to blow up the Viceroy of India’s train.

Manmath Nath Gupta, a member of the HSRA, wrote a number of books in which he has written extensively about Azad’s revolutionary activities. The works of Azad are also covered in a part of Gupta’s book “History of the Indian Revolutionary Movement.”. He named this section “Chandrashekhar Azad”.

Following are a few of Chandra Shekhar Azad’s most well-known slogans from the Indian Independence movement:

How did Chandra Shekhar Azad Die?

The amount of effort expended to apprehend Azad, whether alive or dead, demonstrates how much of an impact he had on the British Raj law enforcement faction. Even a prize of Rs. 30,000 was placed on his head. Vital information on Azad’s whereabouts was revealed as a result of the enormous sum of money.

Chandrashekhar Azad was meeting friends on February 27, 1931, at Allahabad’s Alfred Park. Someone informed the CID head of the police at Allahabad, Sir J. R. H. Nott-Bower about Azad’s meeting at Alfred Park. The police force instantly rushed towards the park and surrounded it.

When the police asked Azad to surrender, he started firing and killing three officers to ensure his friends’ safety. Despite having extremely accurate shooting skills, he started to retreat and suffered a serious injury. He didn’t give up till his last breath and fought bravely.

Azad shot himself in the head with his final bullet after almost running out of ammunition and realizing there was no way out. He kept his promise not to be killed or captured by the British.

Q. Why did Chandra Shekhar Azad Shoot Himself?

Ans: Because he had vowed, he would never be killed or captured by the British.

Q. What is Chandrashekhar Azad Known for?

Ans: For mentoring Bhagat Singh, Rajguru, Sukhdeo, and many other revolutionaries. He organized and led a band of militant youth during India’s independence movement.

Ans: “If your blood does not rage, it is water that flows in your veins.”

Reads Beyond Azad’s Bio Under Inspiration