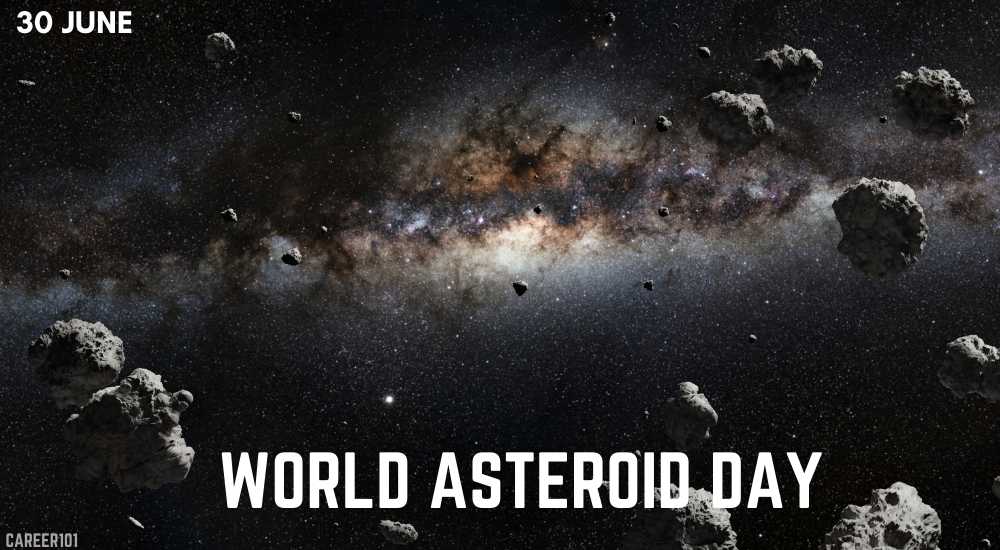 Each year on 30 June, the United Nations celebrates World Asteroid Day as an attempt to bring awareness regarding asteroids to the general public. Also, it encourages people to hit the books and learn as much as they can about the sky above them. The UNGA (United Nations General Assembly) has now officially recognized 30th June as the holiday.

Asteroids are floating space rock that orbits around the sun. Frequently, they are found between the orbits of Mars and Jupiter but some have more eccentric orbits. They are massive in size like a mini-planet and orbit the sun but they are not considered planets. Unfortunately, if they hit our planet earth, they cause huge damage.

International Asteroid Day, also known as World Asteroid Day, is an annual event observed worldwide on 30 June. The day provides an opportunity to generate awareness in public about the destructive effects of the asteroid and to educate people about the asteroid. It is a global action to shield our planet earth from the impacts of asteroids.

World Asteroid Day also highlights the role of asteroids in the creation of our universe, how we can be used their resources in the future, and how asteroids provide avenues for future exploration. It is celebrated by organizing several events, distributing educational stuff, and interacting with the global people on various digital platforms.

The United Nations General Assembly (UNGA) passed a resolution A/RES/71/90 in Dec 2016 and designated 30 June as International Asteroid Day to mark every year the Tunguska impact over Siberia, Russian Federation (30 June 1908) across the globe to bring awareness about the hazardous impact of Asteroids.

The decision of the General Assembly was made based on a proposal made by the Association of Space Explorers, which was espoused by the COPUOS (Committee on the Peaceful Uses of Outer Space).

Asteroid Day was co-founded by astrophysicist and a British musician Dr. Brian May together with Danica Remy, President of B612 Foundation, Rusty Schweickart, Apollo 9 Astronaut, and filmmaker Grig Richters, to bring attention and provide knowledge to the global public about the significance of asteroids in the formation of our universe and the role they play in our solar system today.

Let us tell you one fact there is an organization named B612 committed to safeguarding the Earth from asteroid impacts, informing and forwarding worldwide decision-making on planetary defense issues.

International Asteroid Day is a way to raise awareness about the asteroid’s hazardous impacts when it hits the Earth. The vital role of asteroids in the creation of our universe, how their energy can be used in the future, how asteroids provide the way for future exploration, and also how we can save our earth from the impacts of asteroids.

Brian May said, “Asteroid Day and the 100x Declaration are ways for the public to contribute to an awareness of the Earth’s vulnerability and the realization that Asteroids hit Earth all the time.” It is a must to know and understand asteroids’ hazardous impacts. Therefore, World Asteroid Day is observed across the world to educate people about asteroids and their effects.

(I) “We really need an internationally agreed and coordinated strategy for the development of asteroid litigation technology and very importantly the implementation of procedures for an emergency deflection scenario.”  – Alan Harris
(II) “The idea is to raise awareness of, not only the dangers of asteroids but also the fact that we have solutions in hand to find dangerous asteroids and do something about it.”  – Tom Jones

(III) “A hybrid human-robot mission to investigate an asteroid affords a realistic opportunity to demonstrate new technological capabilities for future deep-space travel and to test spacecraft for long-duration spaceflight.”  – Buzz Aldrin
(IV) “Sooner or later disasters such as an asteroid collision or a nuclear war could wipe us all out, but once we spread out into space and establish independent colonies, our future should be safe” – Stephen Hawking
(V) If the Earth gets hit by an asteroid, it’s game over. It’s control-alt-delete for civilization. – Bill Nye

(VI) “We should really care about asteroids because there are too many out there!” – Pedro Duque / Signatory and Spanish astronaut
(VII) “What if an asteroid were to strike planet Earth? What could we possibly do to prevent it? however many guys we have to work on this problem, it can’t possibly be enough.” – Timothy Noah

(VIII) “The dinosaurs never saw that asteroid coming, what’s our excuse?”  – Neil deGrasse Tyson
(IX) “I despise the Lottery. There’s less chance of you becoming a millionaire than there is of getting hit on the head by a passing asteroid.”  – Brian May

(X) “Noise proves nothing. Often a hen who has merely laid an egg cackle as if she laid an asteroid.”  – Mark Twain
(XI) “It’s much more likely that an asteroid will strike the Earth and annihilate life as we know it than AI will turn evil.”  – Oren Etzioni

(XII) “We have the capability – physically, technically – to protect the Earth from asteroid impacts. We are now able to very slightly and subtly reshape the solar system in order to enhance human survival.” – Rusty Schweickart

(XVII) “We need to take command of the solar system to gain that wealth, and to escape the sea of paper our government is becoming, and for some decent chance of stopping a Dinosaur Killer asteroid.”  – Larry Niven

(XIX) “Threats that could wipe out the bulk of life on earth abound. Planetary catastrophe could come in the form of a killer asteroid impact, the eruption of massive supervolcanoes, a nearby gamma-ray burst that sterilizes the earth, or by human-driven environmental collapse.”  – Ramez Naam

(XX) “An asteroid can literally destroy 80 or 90 percent of the species that are alive on Earth. These are big events. I mean, this is called extinction.”  – Rusty Schweickart

Ans: Asteroid Day is celebrated to generate awareness in public about the destructive effects of the asteroid and to educate people about the asteroid.

Ans: Dr. Brian May together with Danica Remy, President of B612 Foundation founded Asteroid Day.

Q. What does asteroid mean in science?

Ans: Asteroids are floating space rock that orbits around the sun.