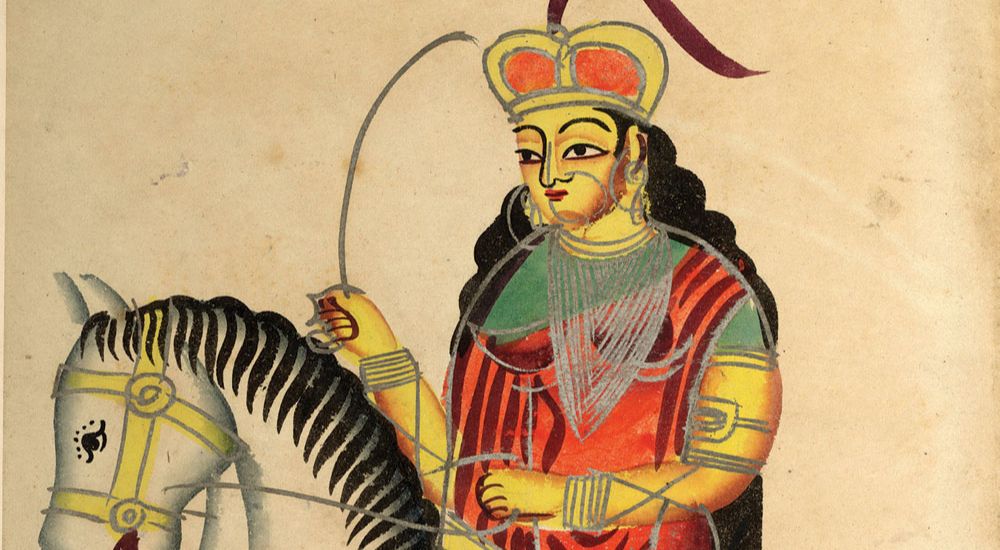 Jhansi Ki Rani Lakshmibai was the queen of the Maratha princely state of Jhansi in Uttar Pradesh, North India. She became a symbol of the Indian independence movement because of her strength, intelligence, courage, sacrifices, and progressive vision of women’s liberty in India in the 19th century.

In our Patriarchic society, males dominate over females, and most of the time you may have heard about only male rulers, freedom fighters, and other figures. So, it’s a one-of-a-kind experience to read about a lady who fought alone and valiantly for her kingdom, self-respect, spouse, and the people of her realm.

Rani Lakshmibai has been one of the tallest figures among the early female freedom fighters. She was born on November 19, 1828, into a Marathi Brahmin family, in the town of Varanasi.

She was the daughter of Moropant Tambe and Bhagirathi Sapre (Bhagirathi Bai). Her mother died when she was just 4 years old. Moropant, her father was the Commander of the war of Kalyanpranth.

Rani’s father, Moropant Tambe worked for Peshwa Baji Rao II of the Bithoor district. Peshwa was an honest man and treated Manikarnika like his own daughter.

He called her “Chhabili”, which means “beautiful ” and “lively and cheerful” because of her happy, jovial, playful, and notorious attitude.

Since it was very difficult for girls to get proper education at school at that time, only males were allowed in schools, Lakshmibai’s education was provided at her home just like others.

Despite being a girl, Lakshmibai got an education at that time because of her background and the acceptance level of her parents, they were very supportive in nature and progressive in thoughts.

Rani Lakshmibai was more independent than other children of her age. It’s intriguing to know that her studies included activities such as horsemanship, Mala Khamba, fencing, and shooting with her childhood friends Tantia Tope and Nana Sahib.

She had a very bold upbringing because her mother died when she was very young. She was famous for her unique viewpoints and fearlessness in defying social standards against the whole society.

Between the palace and the temple, Rani Lakshmibai was accustomed to riding on horseback accompanied by escorts. Although, she was occasionally carried in a palanquin.

Sarangi, Pavan, and Baadal were among her horses, and historians claimed that she rode Baadal when fleeing the fort in 1858.

Lakshmibai’s life was turbulent and full of ups and downs until she married Raja Gangadhar Rao Newalkar, the Maharaja of Jhansi, in May 1842. Following her marriage, she was given the name Lakshmibai in honour of the Hindu goddess Devi Lakshmi, and in accordance with Maharashtrian custom of giving women a new name after marriage.

In September 1851, she gave birth to a newborn boy named Damodar Rao, but unfortunately, he died 4 months later. The maharaja then decided to adopt a kid named Anand Rao, the son of Gangadhar Rao’s cousin and renamed him Damodar Rao one day before he died.

The adoption took place in front of a British political officer. The Maharaja handed a letter to the officer, instructing that the child be treated with dignity and the governance of Jhansi be granted to his widow for the rest of her life.

Since Damodar Rao was an adopted son so the British East India Company, under Governor-General Lord Dalhousie took this as an advantage, and used the Doctrine of Lapse after the Maharaja’s death in November 1853, dismissing Damodar Rao’s claim to the throne and annexing the state to its territories.

When this news was taken to Jhansi Ki Rani Lakshmibai, she became furious and swore that she will not surrender Jhansi at any cost. Her exact words were “Main meri Jhansi Nahi doongi” (I shall not surrender my Jhansi). The Rani Mahal, her palace has now been turned into a museum. It houses a collection of archaeological remains of the period between the 9th and 12th centuries AD.

Rani Lakshmibai and Tantia Tope successfully launched an attack on the city fortress of Gwalior and confiscated the arsenal and treasury. They announced Nana Sahib, a well-liked chief as the Peshwa (ruler). After that, she went to Morar to face a British counterattack led by Hugh Rose.

She fought a fierce battle as a man and was killed in combat. Her funeral is thought to have taken place on the same day, near the place where she was injured. One of her maids helped her in the planning of a quick funeral. A few days after Lakshmibai’s death, her father, Moropant Tambey was hanged to death.

After three days, the British captured the city of Gwalior. In the report of this battle, Hugh Rose described Rani Lakshmibai as “personable, clever, and beautiful” and “the most dangerous of all Indian leaders”. Rose Said, “She was buried with great ceremony behind a tamarind tree under the Rock of Gwalior, where I saw her bones and ashes”.

In both Jhansi and Gwalior, bronze sculptures depicting the Rani on horseback were erected in her honour.

1. Everyone referred to her as “Manu” with affection.
2. When Manikarnika was only four years old, her mother passed away.
3. She has a lot of experience riding horses.

4. She adopted the name “Lakshmi Bai” following her marriage.
5. Lakshmi Bai was born on November 19, 1828, in Varanasi to a Marathi Karhade Brahmin family, but her exact birthday is still up for controversy.
6. The parents of Rani Lakshmibai were Nana Sahib’s cousins.

7. She declared war on the British in order to protect Jhansi.
8. Even the British praised her for her bravery.

9. The palace of Rani Lakshmi Bai has been transformed into a museum.

10. Hugh Rose, the commander of the British troops, said of the Indian chieftain, “she is the most dangerous.”

There have been several movies made about the life and deeds of Jhansi Ki Rani Lakshmibai. Some of the notable movies include:

Manikarnika: The Queen of Jhansi (2019): This was a Hindi-language film directed by Radha Krishna Jagarlamudi and Kangana Ranaut played the role of Rani Lakshmibai.

Q. Why did Jhansi Ki Rani burn herself?

Ans: Rani Lakshmibai Burnt herself because she did not want her body to be captured by the Britishers.

Q. Where was Lakshmibai born?

Ans: She was born in Varanasi.

Q. When did Jhansi Rani die?

Ans: Yes, she was the first women freedom fighter of India against revolted British Raj in 1857.

Q. What is the name of the adopted son of Lakshmibai?