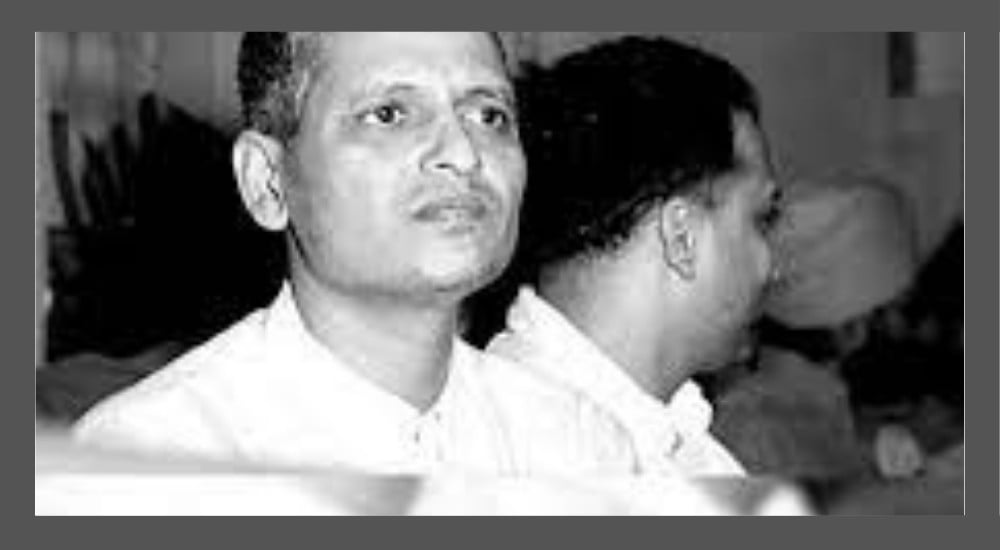 Nathuram Vinayak Godse or, simply Nathuram Godse, was born on the 19th of May 1910 and died on the 15th of November 1949. A Hindu nationalist from Maharashtra Godse is infamously known for killing Mahatma Gandhi. On the 30th of January 1948, at a multi-faith prayer meeting in Birla House, New Delhi, Nathuram shot Gandhi in the chest three times at the point-blank range.

Godse was a member of the political party named the Hindu Mahasabha and a former member of RSS. He was a follower of Vinayak Damodar Savarkar, who had created the ideology of Hindutva and ridiculed the philosophy of non-violence more than two decades earlier. Godse shot Gandhiji dead because he believed Gandhi had betrayed Hindus by being too pro-Muslim and soft on Pakistan.

Soon after he shot Gandhi Ji at the prayer meeting, Godse was grasped and restrained by Herbert Reiner Junior, a vice-consul at the new American embassy in Delhi who was also attending the meeting. Eventually, Godse was taken away by the police. The trial court sentenced Godse to death a year after the assassination, and he was executed in November 1949, after the high court upheld the verdict.

Nathuram Vinayak Godse was born on the 19th of May 1910 in a Maharashtrian Chitpavan Brahmin family in Pune. His father was Vinayak Vamanrao Godse, a postal employee, and his mother was Lakshmi, a homemaker. He was named Ramachandra at his birth, and there is an interesting story behind his naming, Nathuram Godse. He was given his name because of an unfortunate and heartbreaking incident.

Before the birth of Godse, he had four siblings, three of them were male, and the one was female. All three male siblings died in their childhood, and a fear/ belief was created in Godse’s parents’ minds. They believed that there was a curse on their family that targeted male children. At his young Ramachandra was brought up as a girl for the first few years of his life, also having his nose pierced and being made to wear a nose ring (Nath in Marathi). And this was the reason Ramchandra earned the nickname “Nathuram” (literally “Ram with a nose-ring”) but soon after his younger brother was born, they started treating him as a boy.

For early education, Godse joined the local school at Baramati, but after the fifth standard, he was sent to live with an aunt in Pune so that he could study at an English-language school. He couldn’t continue his education and dropped out the higher secondary education. He also worked as a tailor and sold fruit before joining the Hindu Mahasabha.

The Assassination of Gandhiji by Godse

On 30 January 1948, at 05:05 pm, as Gandhi went for a prayer meeting on the raised lawn behind Birla House, a mansion in New Delhi where he was staying, Godse came out of the crowd on his way to the stage and fired three bullets at Gandhi’s chest on the point-blank range. Soon after, Gandhiji fell to the ground, which sent the whole crowd into a state of shock. Gandhiji was taken back into his room in Birla House, and sometime later, a representative came out to announce his death.

After firing bullets on Gandhiji, someone from the crowd captured Godse. According to the witnesses, Herbert Reiner Jr., a 32-year-old vice-consul at the new American embassy in Delhi, first rushed forward and grasped Godse by the shoulders, spinning him into the arms of some military personnel and disarmed him. And soon, Godse was taken away by the military and police. Later the assignation of Gandhiji, Reiner reported that in the moments before he apprehended him, Godse looked a little shocked at how easily he had carried out his plan.

Trial and execution of Nathuram Godse

Gandhi Ji’s murder trial opened in May 1948 in Delhi’s historic Red Fort, with Godse the prime defendant and his associate Narayan Apte and six others as co-defendants. The trial was expedited, and the haste was sometimes attributed to the home minister Vallabhbhai Patel’s desire “to avoid investigation for the failure to prevent the assassination.”

Godse was put on trial at the Punjab High Court at Peterhoff, Shimla, and on the 8th of November 1949, he and Apte were sentenced to death. However, the two sons of Gandhiji Manilal Gandhi and Ramdas Gandhi pleaded for commutation, but they were turned down by India’s prime minister Jawaharlal Nehru, deputy prime minister Vallabhbhai Patel, and the Governor-General Chakravarti Rajagopalachari. And finally, on the 15th of November 1949, Godse and Apte were hanged in the Ambala jail.

After dropping out of high school, Godse worked as a tailor and sold fruits. He became an activist by joining Hindu nationalist organizations Rashtriya Swayamsevak Sangh (RSS) and Hindu Mahasabha, both right-wing organizations. Godse joined RSS in Sangli in 1932 as a groundworker and remained a member of the Hindu Mahasabha. He used to write articles in newspapers to publicize his thoughts.

While he was an active member of RSS, Godse and M. S. Golwalkar often worked together, and they translated Babarao Savarkar’s book “Rashtra Mimansa” into English. Later, M. S. Golwalkar becomes RSS chief. A dispute was created between them, and Godse cut the connection with Golwalkar when he took the entire credit for this translation. After being separated from Golwalkar, Godse formed his own organization, “Hindu Rashtra Dal, on the Vijayadashami day of 1942 but remained a member of the RSS and Hindu Mahasabha.

Godse claimed to have left the RSS in 1946 and moved to the Hindu Mahasabha over the issue of the partition of India. However, historical sources do not support this claim of Godse. An investigation was published by the Caravan in January 2020 revealing that up until the final days of Godse, he was found as a listed member in records kept by the RSS of meetings that took place long after he was supposed to have left the organization. His family has also stated that he had never left the RSS, which highlights that he remained a member of RSS as well as the Hindu Mahasabha. Godse’s first statement in Marathi after assassinating Gandhi also contradicts his 1946 claim, where he says that while he did join the Hindu Mahasabha, he remained active in RSS.

Godse was alleged to be a member of Rashtriya Swayamsevak Sangh and planned the assassination of Gandhiji under the guidance of his leader Vinayak Damodar Savarkar who birthed the idea of Hindutva or Hindu-ness. However, Godse rejected the charge that he had acted under the Guidance of Savarkar. He also told the court that he had left the RSS long before killing Gandhi. But, Dhirendra Jha, the author of Gandhi’s Assassin, writes that there was no “evidence” of him being expelled from the organization. A statement by Godse was also recorded before the trial where he never mentions his departure from the RSS after he became a member of the Hindu Mahasabha.

Ans:- Nathguram Godse killed Mahatma Gandhi because he believed Gandhi had betrayed Hindus by being too pro-Muslim and soft on Pakistan.

Q. who is Nathuram Godse?

Ans:- Nathuram Vinaykrao Godse is the assassin of Mahatma Gandhi. He was born on the 19th of May 1910 in a Maharashtrian Chitpavan Brahmin family in Pune. His father was Vinayak Vamanrao Godse, a postal employee, and his mother was Lakshmi, a homemaker.

Q. Why was Nathuram Godse hanged?

Ans: The judicial trial found Godse guilty of plotting the assassination of Gandhi along with Narayan Apte and six others. Accordingly, he was hanged to death on Nov. 15th 1949 as per Court’s order.

Q. What were Gandhi’s Last Words?

Ans: Hey Ram” were the last words of Gandhiji after being shot.

Q. Why was Gandhi assassinated?

Ans: Measures taken by Gandhi for putting religious strife to end were seen as undue tolerance to Muslims and  pro-Pakistan by certain quarters.  Gandhi’s assassination is reported to be linked with this Hindu antagonizing policy.

Did Nathuram Godse Have Wife?

Nathuram Godse was not married to anyone.

Is there any Nathuram Godse Family Now?

Of course, his family will still live now. Nathuram Godse was sentenced to death and his brother was also sentenced for indirect link to the assassination of Gandhiji. His brother, Gopal Godse, after completing his sentence, he contested for election in UP and lived in Pune.

What was Nathuram Godse Last words?

The last words he said… I do not desire any mercy to be shown to me… I did fire shots at Gandhiji in open daylight. I did not make any attempt to run away; in fact I never entertained any idea of running away. I did not try to shoot myself…