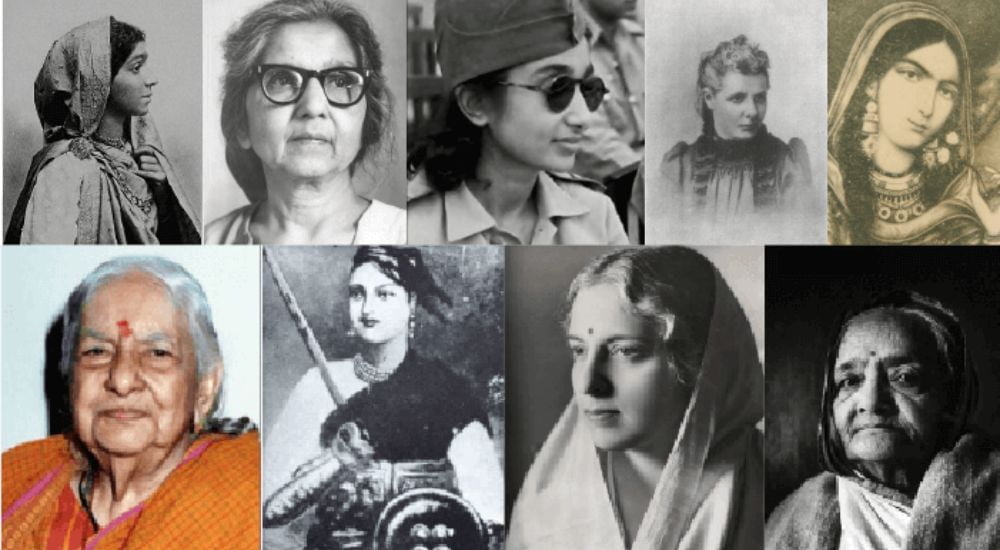 Although it’s not our fault, it’s the bad mindset of our society where we all grew up. In our Patriarchal society, men and their contributions are always given more importance than women.

The name of female contributors always fades away from our minds, which is a bitter truth. Now, it’s time to change our mindset and create a society, where women are treated equally to men.

We can’t overlook the contributions of female freedom fighters, who fought valiantly for an independent India.

A Glimpse to Female Fighters’ Contributions

Female Fighters fought with real spirit and fearless bravery and confronted several pains, exploitations, tortures, and difficulties to give us the air of freedom. These women exhibited great bravery and fervent patriotism.

The history of the Indian Freedom Struggle would be incomplete without highlighting the achievements of many unsung Female Freedom Fighters of India.

Thirty years before the “First War of Independence 1857,” many women, notably Rani Channama of Kittur and Rani Begam Hazrat Mahal of Avadh, fought against the British East India Company.

Now, read this article attentively to know the names and contributions of women freedom fighters of India.

Don’t keep this information to yourself, share it with everyone, so that they also know about these brave-heart, female freedom fighters of India.

1. Annapurna Maharana: She was an Indian Independence Activist and also a well-known advocate for social justice and women’s rights. When a jail term was made Chuni Apa promised to serve the poor.

2. Annie Besant: She was a British socialist, theosophist, women’s rights advocate, author, speaker, political party member, educator, and philanthropist. Also, she was a fierce advocate for human freedom and self-rule in both Ireland and India.

3. Aruna Asaf Ali: Aruna Asaf Ali was a publisher, political activist, and educator from India. She was an important member of the fight for Indian independence, and she is well known for raising the Indian National flag at the Gowalia Tank Maidan in Bombay in 1942, during the Quit India Movement. She continued involved in politics after independence and was elected as Delhi’s first Mayor.

4. Begum Hazrat Mahal: She is renowned for playing a pivotal part in the Indian Rebellion of 1857’s uprising against the British East India Company.

5. Bina Das: She was an Indian revolutionary from Bengal. She participated in the Quit India movement.

6. Durgavati Devi: She was one of the few female freedom fighters of India, who participated in armed revolutions to fight against the British Raj.

7. Hansa Mehta: The daughter of the Dewan of Baroda who fought for gender equality. She was a reformist, social activist, educator, independence activist, feminist, and author.

8. Janakidevi Bajaj: The woman who gave up all comforts of life for the freedom of India. She advocated for the betterment of the lives of Harijans and their temple entry in 1928. She worked for Gauseva and made Khadi clothes to boycott Britisher’s clothes.

9. Janaky Athi Nahappan: The woman who led ‘Rani of Jhansi Regiment’ of the Indian National Army.

11. Kalpana Datta: Kalpana, also known as Kalpana Joshi, was a leader in the Indian independence movement and a participant in Surya Sen’s armed independence campaign, which was responsible for the 1930 Chittagong armoury attack.

12. Kamala Nehru: She was the wife of Jawaharlal Nehru, the first prime minister of India. She joined Harilal Gandhi in the national movement and rose to the top very rapidly. She led women’s protest organizations in Allahabad during the 1931 Non-Cooperation movement and picketed stores that sold imported clothing and alcohol.

13. Kamla Chattopadhyay: She was most known for her involvement in the revival of Indian handicrafts, handlooms, and theatre in independent India, and her pioneering work to improve the socioeconomic status of Indian women.

14. Kasturba Gandhi: She participated in demonstrations against the mistreatment of Indian immigrants in South Africa in 1913, which led to her detention and the imposition of a harsh labour sentence on September 23, 1913. She led other women in prayer while she was imprisoned and urged educated ladies to help the illiterate women learn to read and write.

15. Kittur Chennamma: She was the former Indian Queen (Rani) of Kittur, a former princely state in modern-day Karnataka. In defiance of the Paramountancy, she organized an armed uprising against the British East India Company in 1824 in an effort to keep control of her realm.

16. Krishnammal Jagannathan: The incredible story of this Gandhian from Tamil Nadu who fought the British and poverty at the same time.

17. Kuntala Kumari Sabat: The woman who used poetry as a weapon in the freedom struggle. Odia poet Kuntala Kumari Sabat lived in colonial India. She was one of the woman poets from Odisha who rose to prominence during India’s war for independence and had a unique personality. She was a social worker, doctor, writer, poet, editor, and leader of the nationalist movement. In 1925, she received the Utkala Bharati award.

18. Madam Bhikaji Cama: Bhikhaiji devoted the majority of her time and efforts to charitable causes and social service.

19. Matangini Hazra: The woman who died by gunshots while chanting Vande Mataram. Gandhi Buri, Bengali meaning “old lady Gandhi,” was the name she was given with affection.

20. Nalinibala Devi: How a poet from Assam led other women to participate in the freedom struggle. She is the first female poet from Assam to get the Padma Shri honour and the first woman to chair the Assam Sahitya Sabha.

23. Rajkumari Gupta: The woman who supplied guns and pistols for the Kakori robbery.

24. Rani Lakshmi Bai of Jhansi: Jhansi Ki Rani Lakshmibai was the queen of the Maratha princely state of Jhansi in Uttar Pradesh, North India. She became a symbol of the Indian independence movement because of her strength, intelligence, courage, sacrifices, and progressive vision of women’s liberty in India in the 19th century. She is one of the most prominent female freedom fighters of India.

25. Rosamma Punnoose: She was a lawyer, politician, and advocate for Indian independence. She was the first person to take the oath of office as a legislator for Kerala.

26. Sarala Devi Chaudhurani: One of the most underrated freedom fighters of India who invoked patriotism through music.

27. Savitribai Phule: Savitribai was a Maharashtrian poet, educator, and social reformer, who significantly contributed to the advancement of women’s rights in India. She campaigned to remove caste and gender prejudice and unfair treatment of individuals. She is recognized as a key player in Maharashtra’s social reform movement.

28. Sucheta Kriplani: She rose to prominence during the Quit India Movement and was detained by British forces, just as her contemporaries Aruna Asaf Ali and Usha Mehta. With Mahatma Gandhi, she later collaborated closely during the Partition riots. In 1946, she travelled with him to Noakhali.

29. Tara Rani Srivastava: Tara Rani inspired women from her village and the surrounding area to participate in protest marches against the British Raj in response to public plans that could have increased gender inequity.

30. Tarkeshwari Sinha: She took part in the Quit India Movement. In honour of her brother Captain. Girish Nandan Singh, an Air India pilot who perished in a collision in New Delhi, Tarkeshwari Sinha established a hospital in Tulsigarh. For the construction of the two-story hospital where treatment was essentially free, she had gathered close to Rs 25 lakh, a significant figure in those days.

31. Uda Devi: The warrior from Lucknow who killed over 30 British soldiers in the 1857 rebellion. Today, Devi and other Dalit female combatants are regarded as the “Dalit Veeranganas,” or fighters, of the 1857 Indian Rebellion.

Date of Birth: not known
Date of Death: In November 1857

32. Umabai Kundapur: The fearless leader who sheltered freedom fighters from the British

33. Usha Mehta: She is credited with founding the Secret Congress Radio, an underground radio station that operated for a short period of time in 1942 during the Quit India Movement. She received the second-highest civilian honour bestowed by the Republic of India, the Padma Vibhushan, from the Indian government in 1998.

34. Velu Nachiyar: She was the first Indian queen to go to battle with the East India Company.

FAQs on the Female Freedom Fighters of India

Q. Who is the First Lady freedom fighter of India?

Q. Who was the First Indian Queen to Rebel Against the British?