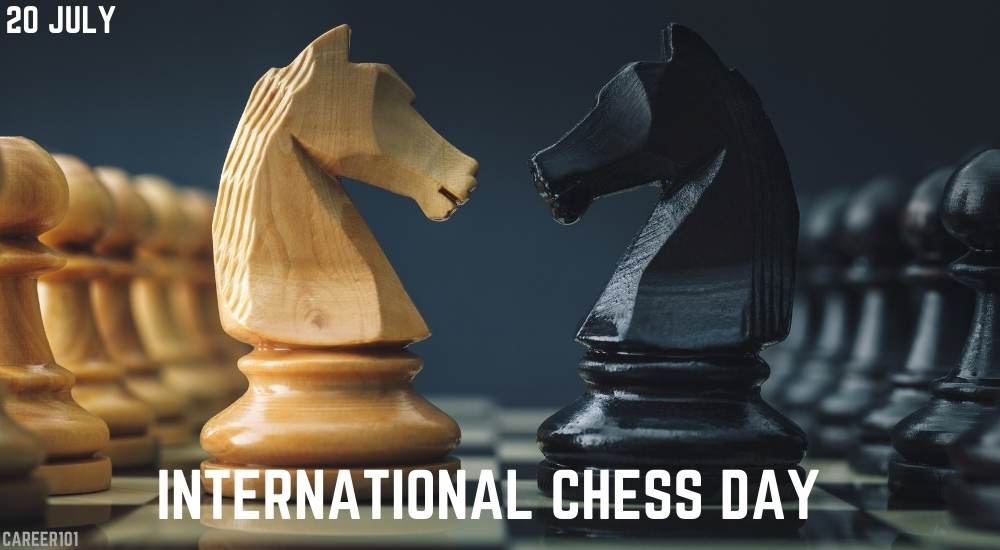 International Chess Day [World Chess Day, now] falls on July 20th, the day FIDE (International Chess Federation) was founded, in 1924. On regular note, the Chess Day mainly seeks to honour the birth of FIDE, the highest body of Chess. However, it’s also about recognition and promoting a fun activity, much synonymous with mental prowess today.

Essentially, Chess is a board game played between two players head-to-head with 16 playing pieces each. 16 pieces include eight pawns, two rooks, two knights, two bishops, one queen, and one king. The colours of these playing pieces are usually black and white, with either of colours assigned to one player. The end objective of the game is to checkmate the opponent’s king, via a series of tactical moves.

With UNESCO’s recognizing the chess day, it would mean signifying one of the most aged and extremely popular games in history. And, also a game that seeks to promote equality, fairness, mutual respect and uniting the geographies with sports’ spirit. The Science has already vouched for the game that helps scale one’s cognitive ability.

A Primer on International Chess Day 2022

The year 2022 would mark the 57th International Chess Day, the first being 1966. In fact, the Chess Day, with recent recognition of World Chess Day by UN, is observed on July 20, since 1966 to mark birth of the FIDE. On that note, this Global Chess Day marks 98th birthday of the FIDE.

Observing the FIDE birthday as ‘World Chess Day’ is like according a special status to chess. Ever since, the FIDE came into being on July 20, 1924 in Paris, July 20th became a special day to chess lovers. Amid the growing popularity of the game, UNESCO proposed the July 20, to also celebrate as World Chess Day. Accordingly, on 12 December 2019 The UNGA passed a resolution and proclaimed July 20th to be observed as World Chess Day.

Theme of International Chess Day 2022 is “Teach a Girl in Particular, How to Play Chess” and this has to do with FIDE’s earlier initiatives. FIDE declared year 2022 as “Year of Woman in Chess” right after organizing The Queens’ Festival 2021 last year. The festival aimed connecting female chess players from world over through a series of tournaments wherein 460 participants from 82 countries flocked in.

FIDE through its bulletin says that calling for “Teach some one chess & encourage others to do the same” worked great to chess and life both, in 2020 & 2021. The federation accordingly decided that this base line is going to be a tradition for Chess Days. Further, 2022 is also the ‘Year of Women in Chess’ to FIDE. Accordingly, the federation aligned the baseline theme with women in chess to come up with 2022 chess day theme.

History of International Chess Day starts from July 20th, 1966 when the first International Chess Day was observed under the initiative of FIDE. Going back into the history however, can give you the idea as why UNESCO paid this attention to chess. The very first modern chess championship was played in 1851 in London, and it was won by German Adolf Anderssen. But, this alone is not the complete picture of chess.

Historical records suggest that Chess was invented in India during the Gupta period (319 – 543 CE) and was originally named “Chaturanga”. Eventually, this game spread to Persia from India. When the Arabs later occupied Persia, Chess became an important part of the life of the Muslim population and from there it spread to Southern Europe. And, gradually the chess took the shape of the modern game in Europe.

The rest is the history of its evolution, where many moves, rules and playing strategies entered the game of chess. The chess went on to become synonymous with mental game with fun. Records suggest that 70% of adult population has at some of point of time has played chess and that approx 605 million people play this game regularly. The United Nations General Assembly (UNGA) also declared 20 July as World Chess Day on 12 December 2019 by passing an unanimous resolution.

A game of strategy and wits, chess is one of the oldest games with a mixture of scientific thinking, sport, and elements of arts. Chess training and practice support the development of higher-order thinking skills—like problem-solving, decision making, critical thinking, planning and so on.

The United Nations General Assembly designated July 20 as World Chess Day, to commemorate the inauguration of the International Chess Federation (FIDE) in Paris in 1924. Also, this day is celebrated to encourage more people to play and enjoy the two-player strategy board game.

How to Celebrate World Chess Day?

Also, you can celebrate this day by inviting someone to have a great chess game. You can teach someone or learn how to play chess. You can join the chess club on this day and have a chess-themed movie night.

(I) “I don’t believe in psychology. I believe in good moves.” – Bobby Fischer
(II) “Chess doesn’t drive people mad; it keeps mad people sane.” – Bill Hartston
(III) “Play the opening like a book, the middlegame like a magician, and the endgame like a machine.” – Rudolph Spielmann

(IV) “In life, as in chess, one’s own pawns block one’s way.  A man’s very wealthy, ease, leisure, children, books, which should help him to win, more often checkmate him.” – Charles Buxton
(V) “I used to attack because it was the only thing I knew. Now I attack because I know it works best.” – Garry Kasparov

(VI) “Chess, like love, like music, has the power to make men happy.” – Siegbert Tarrasch
(VII) “It is my style to take my opponent and myself onto unknown grounds. A game of chess is not an examination of the knowledge; it is a battle of nerves.” – David Bronstein
(VIII) “Chess is life in miniature. Chess is a struggle, chess battles.” – Garry Kasparov

(IX) “Chess is rarely a game of ideal moves. Almost always, a player faces a series of difficult consequences whichever move he makes.” – David Shenk
(X) “For in the idea of chess and the development of the chess mind we have a picture of the intellectual struggle of mankind.” – Richard Réti
(XI) “When you see a good move, look for a better one.” – Emanuel Lasker

(XII) “There is no remorse like the remorse of chess.” – H. G. Wells
(XIII) “Give me a difficult positional game, and I will play it. But totally won positions, I cannot stand them.” – Hein Donner
(XIV) “Chess makes men wiser and clear-sighted.” – Vladimir Putin
(XV) “Chess is the gymnasium of the mind.” – Blaise Pascal

Chess has a history of more than 1700 years. Originally, a game of kings made its reach to common and its popularity in modern world has skyrocketed. The logic, reasoning, tactical moves, creativity in chess make it a real brainy game with endless opportunities. Playing the chess infuses into you a creative quest however to some it is escape from ills of life. Title owners of the Chess are often considered man of high mental capabilities.

Since 1966, July 20 is celebrated as International Chess Day around the world by the Chess players and enthusiasts. However, on 12 December 2019, the UNGA (United Nations General Assembly) declared 20 July as World Chess Day to recognize FIDE. The highest world body of chess, FIDE (International Chess Federation) had come into being on July 20, 1924 in Paris.

On a plain observation Chess seems involving only two people challenging each other in a mental exercise but it is way beyond that. In fact, the Championships of Chess involves players represent their countries and as on date 190+ countries are members to the FIDE. The game is not limited to rich or particular community & geography. So, it has also broken the stereotype barriers as well. Presence of chess club in every township speaks volume of the value addition to life by chess. Let’s promote the game of aptitude on World Chess Day!

Q. What is the theme of International Chess Day?

Ans: Theme for International Chess Day 2022 is “Teach a girl in Particular, To play Chess”.

Q. How Can Chess Day be Celebrated?

Ans: Online & offline events and championships or tournaments, Teaching someone chess, Trying Variants of Chess could be the best ways to celebrate world Chess Day

Q. Is Chess Good for Your Brain?

Ans: Yes, it is very good for our brain.

Q. Has India Ever Hosted a Chess Olympiad?

Q. Which City is Mecca of Chess?

Ans: Chennai is known as Mecca of Chess.

Q. Why is Chennai Called the ‘Mecca of Chess’?