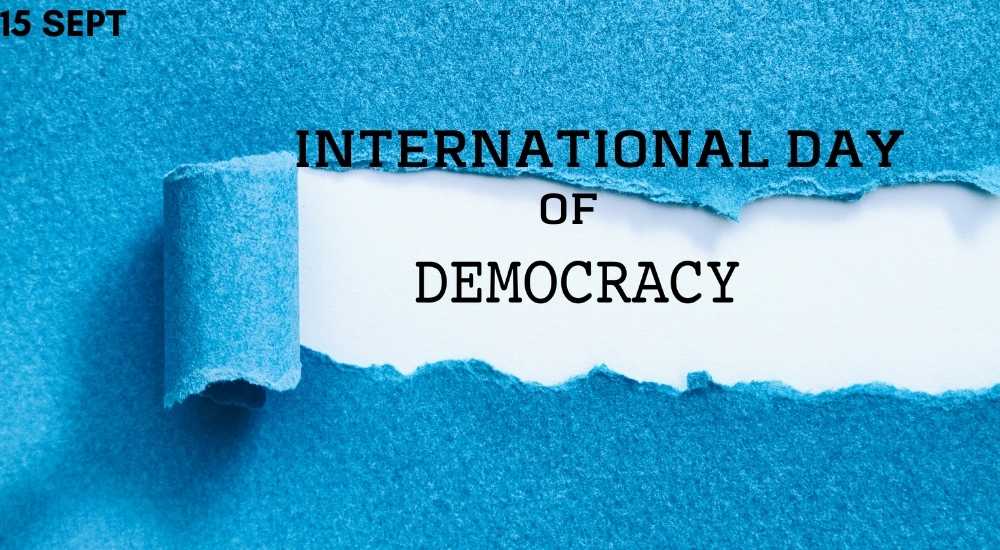 Democracy is a strong form of government in which people have the right to choose their representatives to work for their welfare, and if rulers do not work well, people can change- they will not elect them in the next election.

Each year highlights a specific theme; the theme for last year’s International Day of Democracy was “Strengthening democratic resilience in the face of future crises.” For the year 2022, the theme has not been announced by United Nations (UN) yet; it will be done later.

To celebrate this day, the United Nations encourages governments worldwide to organize special events to promote democracy. These events include photo competitions, workshops for children, discussions, conferences, and live televised debates. Anyone can join these events to acknowledge and enjoy their democracy.

(I) “The only stable state is the one in which all men are equal before the law.”- Aristotle
(II) “It’s not unpatriotic to denounce an injustice committed on our behalf, perhaps it’s the most patriotic thing we can do.”- E.A. Bucchianeri
(III) “There’s too much democracy in the culture, not enough in the society.”- Fran Lebowitz

(IV) “Democracy is the road to socialism.”- Karl Marx
(V) “Democracy cannot succeed unless those who express their choice are prepared to choose wisely. The real safeguard of democracy, therefore, is education. ”- Franklin D. Roosevelt
(VI) “Democracy is the only system capable of reflecting the humanist premise of equilibrium or balance. The key to its secret is the involvement of the citizen.”- John Ralston Saul

(VII) “As I would not be a slave, so I would not be a master. This expresses my idea of democracy. ”- Abraham Lincoln
(VIII) “Deliberation and debate are the way you stir the soul of our democracy.”- Jesse Jackson
(IX) “When Jefferson and the Republicans rallied to the Union and to the existing Federalist organization, the fabric of traditional American democracy was almost completely woven.”- Herbert Croly

(X) “At the time of the Civil War, there were six democracies on the face of the planet. Today, there are 120 and they’ve been inspired by American exceptionalism.”- Robert Kennedy, Jr.
(XI) “Democracy is when the indigent, and not the men of property, are the rulers.”- Benazir Bhutto
(XII) “The best argument against democracy is a five-minute conversation with the average voter.”- Winston S. Churchill

(XIII) “The single most powerful word in our democracy is the word ‘we’. We, the people. We shall overcome. Yes, we can.”- Barack Obama
(XIV) “Democracy literally means the power of the people. Democracy is not about politics; it is about the people.”- Tsakhiagiin Elbegdorj
(XV) “A great democracy has got to be progressive or it will soon cease to be great or a democracy.”- Theodore Roosevelt

(XVI) “The Revolution introduced me to art, and in turn, art introduced me to the Revolution!”- Albert Einstein
(XVII) “I believe that democracy is the best guarantor for peace and cooperation among nations.”- Atal Bihari Vajpayee
(XVIII) “Protest beyond the law is not a departure from democracy; it is absolutely essential to it.”- Howard Zinn

(XIX) “It is my principle that the will of the majority should always prevail.”-Thomas Jefferson
(XX) “In a democracy, the individual enjoys not only the ultimate power but carries the ultimate responsibility.”- Norman Cousins
(XXI) “The road to democracy may be winding and is like a river taking many curves, but eventually, the river will reach the ocean.”- Chen Shui-bian

(XXII) “Democracy is not so much a form of government as a set of principles.”- Woodrow Wilson
(XXIII) “The people who own the country ought to govern it.”- John Kay

History of International Day of Democracy;

The Universal Declaration on Democracy, which was approved on September 15, 1997, by the Inter-Parliamentary Union (IPU), a global association of national parliaments, is responsible for creating the International Day of Democracy.

Significance of International Day of Democracy;

Democracy provides the right to vote and to elect a ruler of choice; rather than being controlled by a government, they self-regulate. Rights and individual freedoms are considered to be some of the most significant features of an ideal democracy.

No other form of government can give such rights and freedoms, including expressions, movements, religion and speech, voting rights, equality, citizenship, and minority rights, as we see in a democracy.

International Day of Democracy was established by the UN General Assembly to encourage governments to strengthen and consolidate democracy. And highlight the importance of democracy and participation of all members for the well-functioning of a democracy.

Q. Why do we celebrate International Democracy Day?

Ans: we celebrate International Democracy Day to recognize the importance of democracy and appreciate democratic nations.

Q. What is the theme of the International Day of Democracy?

Ans: Each year highlights a specific theme; the theme for last year’s International Day of Democracy was “Strengthening democratic resilience in the face of future crises.”

Q. Which day is celebrated as a democracy?

Ans: 15 September is celebrated as the International Day of Democracy annually worldwide.

Q. When was the first International Day of Democracy?

Beyond International Day of Democracy Under Awareness Reads