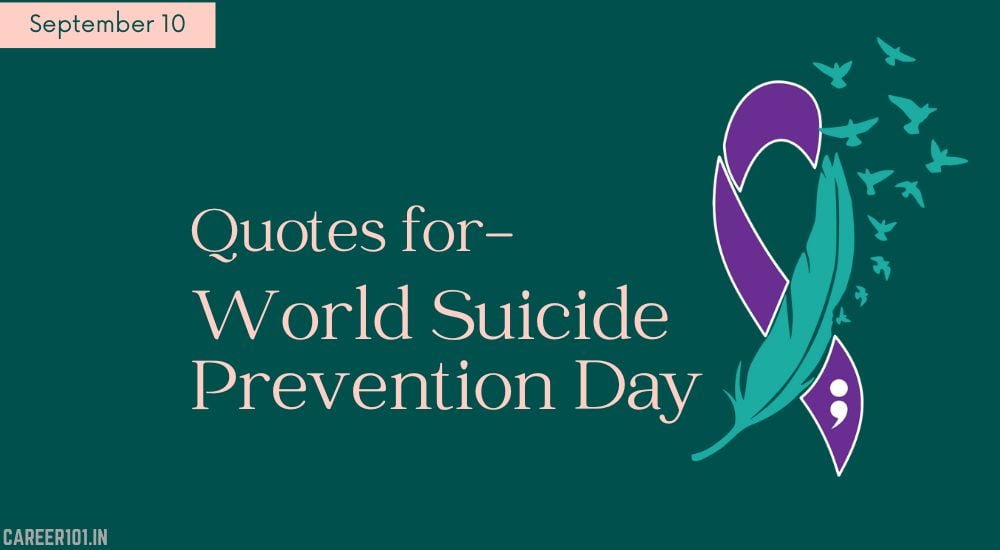 Various events and activities are organized on this day, such as conferences, seminars, and discussion forums, to educate adolescents that suicide is a major avoidable cause of early death and to implement new policies for suicide prevention.

(I) “If life’s a joke, then suicide’s a bad punch line.” — Louise Erdrich
(II) “I’ve learned that no matter what happens, or how bad it seems today, life does go on, and it will be better tomorrow.” ― Maya Angelou
(III) “If I had no sense of humour, I should long ago have committed suicide.” — Mahatma Gandhi

(IV) “When it is darkest, you can see the stars.” ― Ralph Waldo Emerson
(V) “The greatest glory in living lies in not falling, but in rising every time we fall.” ― Nelson Mandela
(VI) “Suicide is the punctuation mark at the end of many artistic careers” — Kurt Vonnegut

(VII) “The real reason for not committing suicide is because you always know how swell life gets again after the hell is over.” ― Ernest Hemingway
(VIII) “People commit suicide for only one reason – to escape the torment.” — Li Ang
(IX) “I am constantly torn between killing myself and killing everyone around me.” — David Levithan

(X) “Suicide isn’t cowardly. I’ll tell you what’s cowardly; treating people so badly that they want to end their lives.” — Ashley Purdy
(XI) “Never, never, never give up.” – Winston Churchill
(XII) “If I cannot give consent to my own death, whose body is this? Who owns my life?” — Sue Rodriguez

(XIII) “Some so fear the future that they suffocate the present. It’s like committing suicide to avoid being murdered.” — Richard Paul Evans
(XIV) “Healing takes courage, and we all have courage, even if we have to dig a little to find it.” ― Tori Amos
(XV) “Suicide is a real threat to health.” — Virginia Bottomley

(XVI) “Being short never bothered me for three seconds. The rest of the time I wanted to commit suicide.” — Mel Brooks
(XVII) “The only serious question in life is whether to kill yourself or not.” — Albert Camus
(XVIII) “Suicide is a permanent solution to a temporary problem.” — Phil Donahue

(XIX) “You have the power to say, ‘This is not how my story will end.’” – Christine Mason Miller
(XX) “Suicide is man’s way of telling God, ‘You can’t fire me – I quit.’” — Bill Maher
(XXI) “The man who kills a man kills a man. The man who kills himself kills all men. As far as he is concerned, he wipes out the world.” — Gilbert K. Chesterton

The first celebration of World Suicide Prevention Day was held on 10 September 2003 by the IASP (International Association for Suicide Prevention), World Federation for Mental Health and World Health Organization. This day is observed to collect data on suicide, figure out the causes, and develop various policies to prevent suicide.

World Health Organization (WHO) published the suicide report in 2014, “Preventing Suicide: A Global Imperative”, which focused on suicide prevention and made it a high priority on the global public health agenda.

International Association for Suicide Prevention, also known as IASP, was founded in 1960, in Vienna, by the Austrian psychiatrist Erwin Ringel and Dr Norman Faberlow. It is a Non-Governmental Organisation that is dedicated to suicide prevention. Present day, it is now comprised of experts and volunteers from 77 different nations.

Approximately more than 800,000 people die every year due to suicide. Somewhere in the world, one person commits suicide every 40 seconds. The majority of these take place in underdeveloped and developing nations.

While many factors can encourage a person to commit suicide, the most common is a major depressive disorder. Also, different types of abuse, including domestic, sexual or physical, can provoke someone to commit suicide.

Q. What is the theme for World Suicide Prevention Day 2022?

Ans: “Creating hope through action” is the theme for World Suicide Prevention Day 2022.

Q. Why do we celebrate suicide prevention day?

Ans: World Suicide Prevention Day is celebrated on 10 September worldwide to provide commitment and action to prevent suicides and create awareness among people that suicide is preventable.

Q. What age group is most suicidal?

Ans: The National Violent Death Reporting System data showed that most men over 65 die due to suicide, followed by men 40–64, Men 20–39 and 15–19 were less likely to die of suicide.

Q. When was the first suicide prevention day Celebrated?