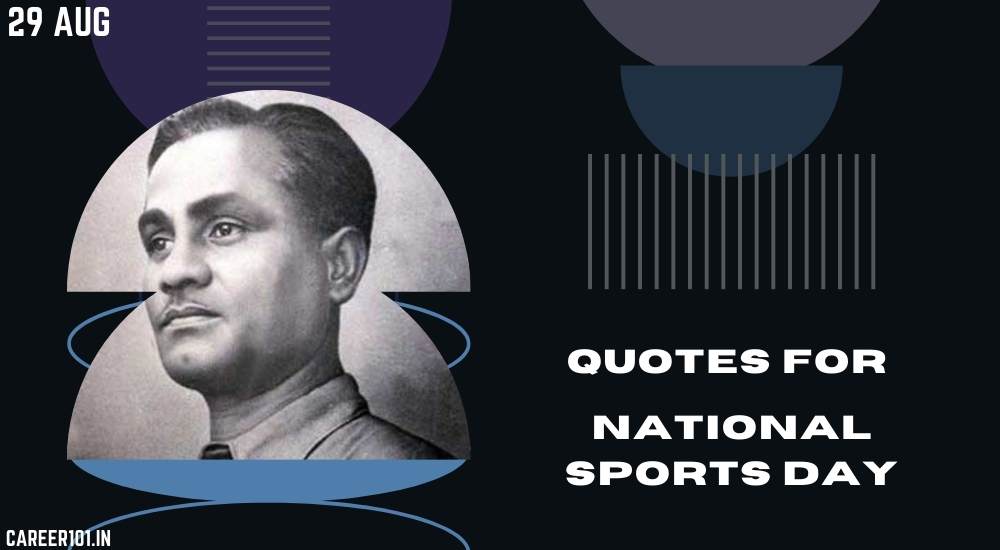 But there’s more, National Sports Day or Rashtirya Khel Diwas is also an occasion celebrated to honor the sports heroes, and the Indian government used this occasion to spread awareness about the benefits of sports and encourage youths to take participate in physical activities.

(I) “If I, being a mother of two, can win a medal, so can you all. Take me as an example and don`t give up.” – Mary Kom
(II) “The only way to prove that you’re a good sport is to lose.” —Ernie Banks
(III) “Your dreams are what define your individuality. They have the power to give you wings and make you fly high.” – PV Sindhu

(IV) “I’d rather regret the risks that didn’t work out than the chances I didn’t take at all.” —Simone Biles
(V) “When people throw stones at you, you turn them into milestones.” – Sachin Tendulkar
(VI) “Overpower. Overtake. Overcome.” —Serena Williams

(VII) “Don’t be afraid of failure. This is the way to succeed.”- LeBron James
(VIII) “Make sure your worst enemy doesn’t live between your own two ears.” —Laird Hamilton
(IX) “What makes something special is not just what you have to gain, but what you feel there is to lose.” —Andre Agassi

(X) “You win some, you lose some, and some get rained out, but you gotta suit up for them all.” —J. Arkenberg
(XI) “Just believe in yourself. Even if you don’t pretend that you do and, and some point, you will.” – Venus Williams
(XII) “I believe in the impossible because no one else does.” —Florence Griffith Joyner
(XIII) “Champions keep playing until they get it right.”- Billie Jean King

(XVII) “I always felt that my greatest asset was not my physical ability, it was my mental ability.”- Bruce Jenner
(XVIII) “Passion first and everything will fall into place.” —Holly Holm
(XIX) “There may be people that have more talent than you, but there’s no excuse for anyone to work harder than you do.” – Derek Jeter

(XX) “The past doesn’t matter. Take today.” —Becky Sauerbrunn
(XXI) “If I have a reason to do something, and I have enough passion, I generally succeed.” – Leander Paes
(XXII) “The harder the battle, the sweeter the victory.” – Les Brown

(XXVI) “Believe me, the reward is not so great without the struggle.” —Wilma Rudolph
(XXVII) “Sports serve society by providing vivid examples of excellence.” —George F. Will
(XXVIII) “Life begins at the end of your comfort zone.” —Neale Donald Walsh

India designated August 29 as National Sports Day in 2012 to honor the sporting legend and bring awareness about the importance of sports activities in everyday life. The President of India honors with recognition like the Khel Ratna, Arjuna Awards, Dronacharya Awards, and Dhyan Chand Awards to inspirational sports luminaries.

Major Dhyan Chand was born on August 29, 1905, in resent-day Prayagraj, UP, India. He was born in a Kushwaha Rajput family; his mother’s name was Sharadha, and his father’s name was Rameshwar Singh. Dhyan Chand had two siblings — Mool Singh and Roop Singh.

Dhyan Chand joined the British Indian Army as a sepoy at the age of 16, and he played his first international match in the year 1948. Dhyan Singh used to practice his hockey at night under the moonlight because he served himself most of the day in regimental duties; therefore, he got the name Dhyan ‘Chand.’

The reason behind the celebration of National Sports Day is to shine on the legacy of Major Dhyan Chand and create awareness among the general people about the importance of sports and being physically active in everyday life. The government has used this occasion to launch sports-related projects, including the Khelo India campaign in 2018, announced by Prime Minister Narendra Modi.

On this day, a special is held at the Rashtrapati Bhavan. The President of India confers significant sporting honors to great sports personalities, including the Khel Ratna, Arjuna Awards, Dronacharya Awards, and Dhyan Chand Awards.

Q. Why do we celebrate our National Sports Day?

Q. Why Sports day is celebrated on 29 August?

Ans: Sports day is celebrated on 29 August because Major Dhyan Chand was born on 29 August 1905 in Prayagraj, UP.

Ans: India designated 29 August as National Sports Day in 2012, to honour the sporting legend and bring awareness about the importance of sports.

Q. What is India’s national sport?

Ans: There is no official national sport in India.