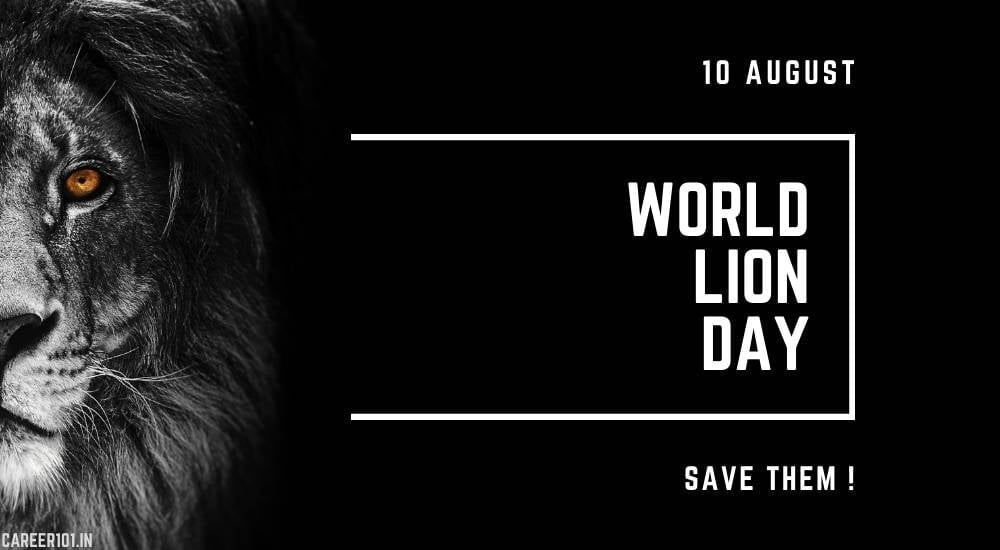 Every year, World Lion Day is an international event celebrated on August 10 to preserve and protect the remaining lion species in the world. Lions are on the verge of extinction, so it is necessary to bring awareness of the plight of the lion and the issues that the lions face in the wild.

Big cats, including lions, are strict carnivores; they eat meat only. Due to this, they are at the top of the food chain, where they play a crucial ecological role by regulating prey populations- mainly large mammal herbivores. Without the lions, our well-working ecosystem can disturb badly.

What is World Lion Day?

World Lion Day, often known as lion day, is an annual international event held on August 10. The objective of this day is to educate people about lions and their habitats and spread awareness to preserve and protect lions of the world. Lion is listed as endangered on the Red List released by the IUCN (International Union for Conservation of Nature).

Hence, World Lion Day has three objectives. The first is to create awareness among the people about the issues the lions face in the wild. The second is to find ways to protect the jungle king- the Lion. Moreover, the last one is to teach people who live near the jungle about the dangers of lions and how they can protect themselves without killing them.

A couple passionate about the preservation and protection of lions led the first World Lion Day in 2013. After noticing that the lion population has significantly decreased across the globe. The Jouberts kindly requested “National Geographic” for the brand’s help. Collaborating with National Geographic, the couple launched the Big Cat Initiative (B.C.I.) in 2009.

Protecting and preserving the remaining lion species in the world was the main goal of the National Geographic Big Cats Initiative. The partnership wants to protect these creatures- lions in their natural habitat. Furthermore, the Big Cat Initiative also works on safety measures by educating people about how to protect themselves without killing lions.

Approximately 4 million years ago, lions lived in their natural habitat across Asia, Europe, Africa, and the Middle East. However, now, loins roamed freely in only two locations, Africa and Asia. Lion is listed as endangered on the Red List of Threatened Species. Today, there are about 30,000 to 100,000 lions left on earth.

In the past few decades, lion populations have decreased almost by half. Therefore, World Lion Day provides a significant opportunity to learn about the most majestic species and their habitat. Also, this day aimed to spread awareness about how we can contribute to the conservation and preservation of the lion species.

Lions – with the scientific name Panthera Leo – are the second largest cat in the world after tigers. Lions are mega beasts or kings of the jungle; they love to live on grasslands and in an open- healthy environment. So, if we try to conserve nature or natural resources, ultimately, we can contribute to the conservation of lions.

(I) “It is no accident that the photographer becomes a photographer any more than the lion tamer becomes a lion tamer.” – Dorothea Lange
(II) “A lion sleeps in the heart of every brave man.” – Turkish Proverb
(III) “The lion does not need the whole world to fear him, only those nearest where he roams.” – A. J. Darkholme

(IV) “It is better to go in the dark when the road must pass a lion and there is no other road.” – Robert E. Howard
(V) “Love has the face of a goddess, but the talons of a lion.” – Ivan Panin
(VI)  “An injured lion still wants to roar.” – Randy Pausch

(VII) “Courage is poorly housed that dwells in numbers; the lion never counts the herd that are about him, nor weighs how many flocks he has to scatter.” –  Aaron Hill
(VIII) “The truth is like a lion. You don’t have to defend it. It will defend itself.” – St. Augustine
(IX) “The lion is, however, rarely heard – much more seldom seen.” – John Hanning Speke.

(X) “The lion is an emblem of the dream of absolute power — and, as a wild rather than a domestic animal, he belongs to a world outside the realm of society and culture.” – Charles H. Hinnant
(XI) “The greatest fear in the world is of the opinions of others. And the moment you are unafraid of the crowd you are no longer a sheep, you become a lion. A great roar arises in your heart, the roar of freedom.” – Osho.
(XII) “The difference between a brave man and a coward is a coward thinks twice before jumping in the cage with a lion. The brave man doesn’t know what a lion is. He just thinks he does.” – Charles Bukowski

(XIII) “Familiarity makes the lion more dangerous.” – Jocelyn Murray.
(XIV) “Truth does not sit in a cave and hide like a lie. It wanders around proudly and roars loudly like a lion.” – Suzy Kassem
(XV) “Whatever you do; do it like a lion, wholeheartedly.” – Harsh Tiwari