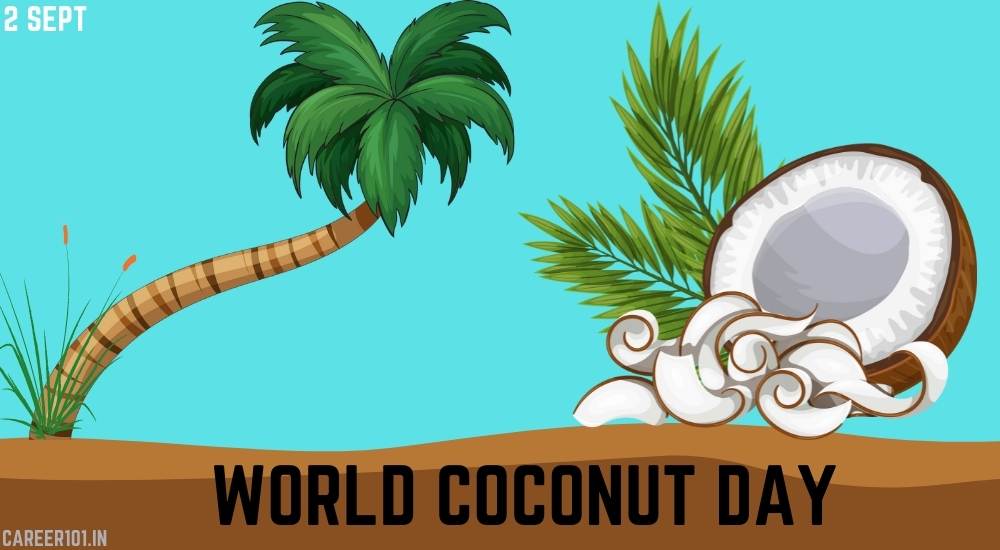 World Coconut Day is an international event celebrated every year on 2 September to commemorate the creation of the APCC (Asian Pacific Coconut Community). The headquarter of APCC is in Jakarta, Indonesia and major coconut-producing countries, including India, are members of APCC.

The day is celebrated worldwide to highlight the importance and benefits of coconut and bring awareness about how it is beneficial for our health. Also, this day educates people on how we can grow and preserve coconut on a large scale.

Coconut is the edible fruit of the coconut tree and is one of the most versatile fruits, and it offers many benefits. Coconut water contains various anti-fungal, antiviral, antioxidants and antibacterial elements. Even some countries are producing some daily needs items from coconuts such as oil, hair oil, and milk; additionally, mats and ropes are two products manufactured from coconut fiber.

On 2 September 2009, the first World Coconut Day was celebrated by the APCC to highlight and promote the importance and usage of coconuts in our lives. The date 2 September was chosen because it is when the Asian and Pacific Coconut Community (APCC) was founded in 1969.

The Asia Pacific Coconut Community was established in 1969 and was founded to help support and promote the tropical countries that are high in growing, selling and exporting coconuts. The headquarter of APCC is in Jakarta, Indonesia. This community stays connected with each country to share scientific expertise and coordinate activities.

Eventually, this attempt worked, and the members of the Asia Pacific Coconut Community are responsible for the growth of more than 90% of the coconuts produced, sold and distributed worldwide.

Today, Indonesia country is the top producer of Coconut, followed by India in second position. In India states like Karnataka, Kerala, Tamil Nadu, and Andhra Pradesh are the leading contributors to the production of coconut. As already mentioned above, coconut offers us multiple benefits and has an important role in the lives of many people not only health-wise but economically wise also.

Hence, 2 September is designated as World Coconut Day by the Asia Pacific Coconut Community in an attempt to highlight the importance of and usage of coconut fruits. And, spread awareness about that how we can grow coconut on large scale and preserve it.

(I) “The only time I feel at ease is swinging up and down in a coconut tree.” — Ray Davies
(II) “Coconut is one of those love-hate ingredients.”– Marcus Samuelsson
(III) “I’ll admit that I do quite like drinks that come in coconut shells. So, there’s always that.” — Danica McKellar

(IV) “For I am coconut, and the heart of me is sweeter than you know.” — Nikki Grimes
(V) “I was sometimes called ‘coconut’ when I was at school.”– David Oyelowo
(VI) “Coconut milk is the only thing on this planet that comes identically to mother’s milk.”– Dick Gregory

(VII) “Use coconut oil; it is one of the best moisturizers. Use it right after the shower on wet skin and then wipe it off with a towel.”– Irina Shayk
(VIII) “Coconut oil is the healthiest oil on earth.”– Bruce Fife
(IX) “In the garden of gentle sanity, may you be bombarded by coconuts of wakefulness?”– Chogyam Trungpa

(XIII) “I’m just taking care of myself: Eating less, exercising more, and drinking a lot of coconut water.”– Jennie Garth
(XIV) “I happen to love coconut, particularly for that sweet and crunchy texture it adds to any dish.”– Marcus Samuelsson
(XV) “Yes, we could solve why, but we could also eat another slice of coconut cake.”– Sam Lipsyte

Ans: National Coconut Day is celebrated worldwide to highlight the importance and benefits of coconut and bring awareness about how it is beneficial for our health.

Ans: “Building a Safe Inclusive Resilient and Sustainable Coconut Community Amid COVID-19 Pandemic and Beyond” was the theme of World Coconut Day 2021.

Q. Which country is the largest producer of coconut?

Ans: Indonesia country is the top producer of Coconut, followed by India in the second position.

Q. Which country uses the most coconut?

Ans: Sri Lanka has the highest coconut consumption per capita, with 61.9 kg.