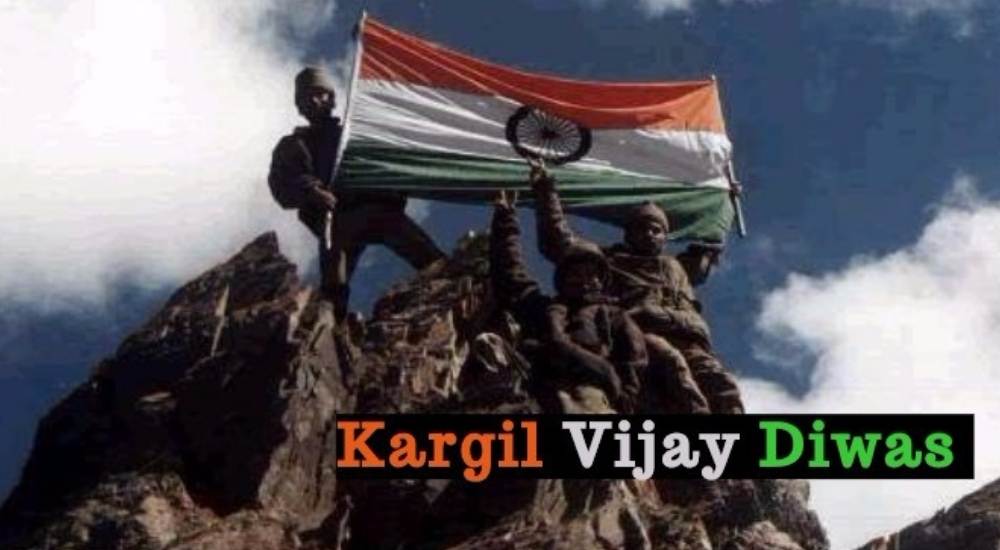 It is 23 years now, when India made Kargil Victory on July 26, 1999 and started celebrating the day as Kargil Vijay Diwas to honour the valour and martyrdom of its soldiers. The 1999 Kargil War was the latest India Pakistan warfare after 1971 under which also, Pakistan failed miserably attaining its ulterior motives.

Months before the Kargil war broke out in May 1999, Pak military was secretly sending its troops to Indian side in the guise of Kashmiri insurgents and training them. They undertook entire infiltration under a codename  ‘Operation Badr’ which had a broader aim of forcing India to settle the Kashmir dispute in their favour. Before that, they sought Indian withdrawal from Siachen by disrupting the only link High Way NH1, between Srinagar and Leh that passes through Kargil township of Ladakh.

Observing 26 July as Kargil Victory Day recognizes the valour and sacrifices of our soldiers and it boosts morale of all who either are serving or planning their career in Defence.

Significance of Kargil Vijay Diwas also lies in the fact, that the enemy is reminded time and again that any evil action will meet the fate of Kargil war. Any secessionist power working against the country does also get a message.

Kargil Vijay Diwas is the occasion when the topmost office bearers of the country pay obeisance to the martyrs of the war regardless of their schedules.

Celebrating the Victory Day in War also becomes significant in the sense that every country honours the supreme sacrifices of soldiers. The grand war memorials with big budgets are only extension to the one-day ceremonial event.

MUST READ: The Shershah of Kargil War Captain Vikram Batra

How Kargil Vijay Diwas 2022 is being Celebrated?

Indian Army has got into elaborate arrangements for the 23rd Kargil Vijay Diwas, on 26 July 2022. Officially, the Grand commemoration is to take place at the Kargil War Memorial. It is three-day event to mark of India’s victory over Pakistan in the Kargil War in 1999.

Cultural performances are going to be part of event at Kargil War Memorial (also known, Dras War Memorial). The Shershah team is also likely to perform at the event. Also, Choreographed dance performances, and patriotic songs will be the part of celebration.Top dignitaries from armed forces esp. Army, and the gallantry awardees with family are attending the proud occasion.

Prior to the official celebration of Kargil Vijay Diwas, Defence Minister Rajnath Singh has addressed the nation on July 24th from Jammu & Kashmir. Even prior to this, on July 18th Lt. General BS Raju, Vice Chief of Army Staff, flagged off a motorcycle rally at National War Memorial Delhi. The rally follows two routes viz. Delhi-Srinagar-Zojila-Kargil-Dras & Delhi-Chandigarh-Rohtang-Leh-Dras with both reaching Kargil War Memorial on July 26th.

Several other programmes are underway across country to celebrate the bravery and supreme sacrifices that made Kargil War a success. Schools and community centres are organizing Kargil Vijay Diwas quiz, essay, speech, painting and drawing competitions all in the memory of our bravehearts who laid their lives in Kargil war.

Alongside the national celebration, BJP for the first time has also organized a mega rally of Tiranga bikers to mark 23rd Kargil Vijay Diwas. The rally has been flagged off from Lal chowk of Srinagar for Srinagar afternoon 25th July by Tarun Chug, Gen. secty and Tejasvi Surya, President BJYM is also organizing a prabhat pheri with Tiranga on morning 26th July.

Stats on Kargil War That Led to Kargil Vijay Diwas

Small scale armed engagements and cross fires with Pak forces is the order of the day. However, after Indo-Pak War of 1971 and Operation Meghdoot of 1984 there was no major warfare with Pakistan. With Kashmir in centre, both countries have been belligerent and have sought raising their respective prowess.

In 1998 both India & Pak carried out nuclear tests escalating tensions in the region. However, a peaceful resolution to the Kashmir issue was agreed to, by both in the Lahore Declaration, Feb 1999.

The Pakistan however, sought to take advantage of the lull from Indian border forces. And, in the guise of Mujahideen caused infiltration into the Indian side. Their objective was to cut off links between Kashmir and Ladakh and then compelling India to settle the Kashmir dispute in their favour.

General Pervez Musharraf, the then head of Pak army engineered all this, allegedly without keeping Pak PM Nawaz Sharif in loop. Pak had captured various strategic points on Indian side of LOC, placing themselves in advantageous positions to take on Indian forces.

On discovery of infiltration, the Indian forces first took a couple of days in assessment of the gravity of issue and then came up with ‘Operation Vijay’. And, then mobilized 200,000 Indian troops to evict the nasty infiltrators. The fight with Pak forces was along the 160 km long ridge stretch overlooking NH1

In the 60 days long battle, India at the cost of many of its soldiers managed to recapture all the positions illegally occupied by Pak. Indian Air Force and Navy both played crucial roles in assisting the Army achieve the feat. Regaining each of positions is a saga of great bravery and an Indomitable will of Indian soldiers. Diplomatic support from USA and others also helped India significantly.

When the Pak PM approached Washington for assistance, he was rebuked by then establishment under President Bill Clinton. In fact, India had brought to the fore, intercepts of communications between senior Pakistani military officials on Kargil. The evil design of Pak met the fate of Kargil Victory of 26 July.

Dimensions of The Intrusion That Required Kargil War

Infiltration by Pakistani forces, was into a 160 km long stretch of ridges (chain of mountain peaks) of Kargil District, overlooking NH1 that links Srinagar and Leh.

Some of these peaks were adjacent to highway and on Indian side, which lended Pak forces an advantageous position to severe the only logistics line to Leh. Ladakh area consists of only two districts Kargil & Leh.

Batalik Sector has a strategic location between Kargil, Leh and Baltistan and it also under serious intrusion of Pak forces.

Drass sector famous as gateway to Ladakh falls in Kargil District. Kargil town is further 58 km after Dras on NH 1 from Srinagar towards Leh.

Tololing Hill would fall in Drass sector and Tiger Hill in Drass-Kargil area, 4 km and 8km respectively from entry point of Drass along the NH1.

The fight between India Pak was along this 160km long stretch of NH1, prominently falling under Kargil district.

Without knowing the important breakthroughs to Indian forces during Kargil war the entire victory might sound you an overnight feat. However, the fact is that, it was an achievement through a great planning and a persistent fierce battle with enemy. Just have a look.

How to Celebrate Kargil Vijay Diwas?

Each individual has his own way of paying tribute to the martyrs. Some would prefer conducting and participating community activities like: Quizzes, Essay Contests, Drawing competitions, speech contests etc. Others can go solo to read the history of this major Victory.

With that said, one of the fantastic ways to commemorate Kargil Vijay Diwas would be to read the books on Kargil War. Some of these books could be giving you the  views contrasting to your prior knowledge but at the end you will get a clear idea as to the truth.

1. Kargil : From Surprise To Victory by Malik V. P. General
2.Asymmetric Warfare in South Asia by Peter R. Levoy
3. Letters From Kargil: The Kargil War Through Our Soldiers’ Eyes  by Diksha Dwivedi
4. 1965: Stories from the Second Indo-Pakistan War by Rachna

5. The Kargil War by Praveen Swami
6. Trishul,Ladakh and Kargil by Brigadier (retd) Ashok Malhotra
7. Guns and Yellow Roses: Essays on the Kargil War by Sankarshan Thakur
8. Despatches from Kargil by Shrinjoy Chowdhury

There were three operations launched during Kargil War, the Operation Vijay being the main and other two were supporting ones.

Operation Vijay was the name of Military Operation headed by Army during Kargil war. It is Interesting to note that, Military & Army is used interchangeably but Military is umbrella term for all armed forces.

Operation Safed Sagar was the codename assigned to the Indian Air Force’s operations during the Kargil Conflict of 1999.

Operation Talwar (Operation Sword) was the naval operation carried out by the Indian Navy during the Kargil War of 1999.

1. Victory doesn’t come cheap, we also had to carry some biers… A tribute to the martyrs of India” – Amitesh Sodhiya
2. I am a soldier. I fight where I am told, and I win where I fight.
3. I regret I have but one life to give for my country.
4. Our flag does not fly because the wind moves it, it flies with the last breath of each soldier who died protecting it.

5. Either I will come back after hoisting the Tricolour, or I will come back wrapped in it but I will be back for sure” – Captain Vikram Batra “
6. Real Heroes don’t have a name on the back of their Jersey. They wear their country’s Flag.
7. I won’t die in an accident or die of any disease. I will go down in glory.
8. Sleep peacefully at your home. Indian Army is guarding the frontiers.

9. If death strikes before I prove my blood, I swear I’ll kill Death” – Lt. Manoj Kumar Pandey
10. We live by chance, we love by choice, we kill by profession” – Officers Training Academy, Chennai
11. Nationalism entails laying down one’s life for one’s country in larger interest.

Wishes for a day of great historic importance such as Kargil Vijay Diwas shouldn’t sound dull. Instead, it should evoke your emotions and widen your views. Accordingly, team career101 crafted following lines of wishes you can make use of, on this Kargil Vijay Diwas.

1. The red-letter day of 26 July is for remembering the brave sons of India who had no second thought than to clinch Kargil in return of their lives. Let’s pay homage to the great souls. Happy Kargil Vijay Diwas 2022!

2. This was not possible without a mother losing her son, a sister losing her brother, a wife losing her husband and a kid losing his father. Let’s stand for them by lighting a candle. Happy Kargil Vijay Diwas 2022

3. Let’s not forget the supreme sacrifices of India’s brave sons who died in the line of duty. Happy 23rd Kargil Vijay Diwas!

4. The day couldn’t be a reality without the great souls who held country above the self. Let’s pay obeisance to all. Happy Kargil Victory Day 2022!

5. It was because of their commitment to honour Tricolur, live or dead. Million Salute to Kargil Martyrs. Happy Kargil Vijay Diwas!

Well, here are pieces of status for your whatsApp and other messaging platforms, you can make use of, on this Kargil Vijay Diwas

1.The deepest reverence to all martyrs who made Kargil Victory a reality.
2. A million salutes to the brave sons of mother India who made Operation Vijay a success.
3. Remembering the sacrifices of our Jawans in 1999 War against Pak

4. Salute to all the jawans who laid their lives fighting for our nation
5. Proud to Win Kargil but Sad that we lost our dear ones in those hills
6. To my countrymen, I’m the shield. To my enemies, I’m the sword.
7. I dedicate this Kargil Vijay Diwas to the extraordinary gallantry of Armed Forces.

You’ll get many posters on Kargil Vijay, but you wont see in them what this day stand for. Precisely, the victory in Kargil war is not just for rejoicing, it’s a reminder to ourselves also that you cannot trust your enemies basis their apparent gestures. Cunningness of the enemy has been exposed more than once, the last on Kargil Intrusion.

I therefore, feel that that an Ideal poster for Kargil Vijay should portray a vigilant soldier not to afford any chance and then a philosophy that teaches Indian to hold motherland in highest regard. Check out