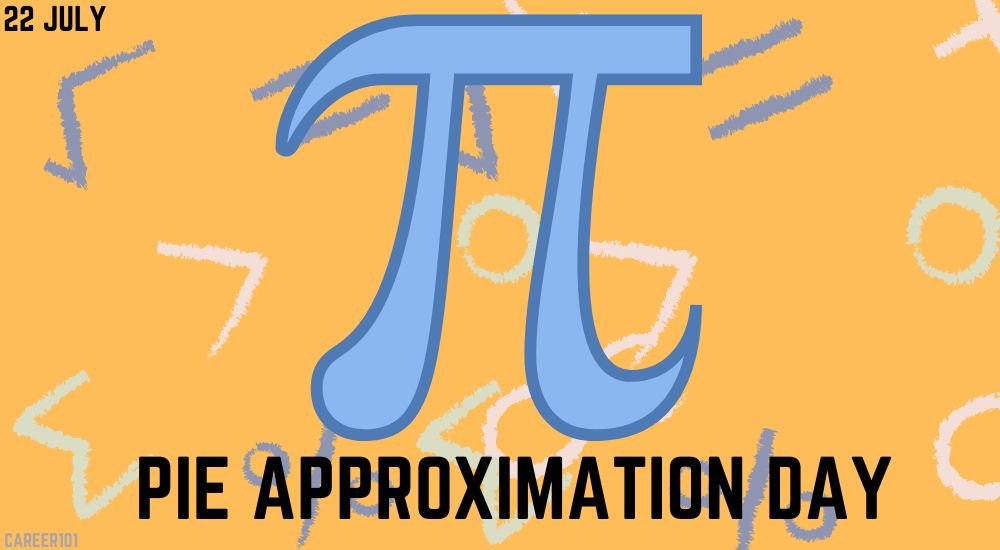 Pi Approximation Day is celebrated every year on 22 July to glorify the mathematical constant pi (π), which is denoted by the Greek letter pi and approximates to 3.14. This day is also committed to honouring and appreciating the efforts of various scientists, and mathematicians to research finding the value of pi.

22 July is Pi Approximation Day (often known as Casual Pi Day) for all those country and people who write their date in a date/ month format. To them, 22 July is 22/7, which is essentially the approximated value of π.

For the countries and people who write their date in a month/date format, pi day falls on March 14th. To them, it is 3/14 which essentially first three digits of actual pi value. It is interesting to note that number of decimal places after integer 3, while writing the actual value of π can go up to trillions.

History of The Pi Approximation Day

Significance of ‘Pi Approximation Day’ lies in significance of pi, that made day to day calculations simpler and practical. Credit for Practical approach to assigning the approximate value to pi goes to Archimedes. He positioned value of pi something like 223/71 < π < 22/7, or an average value of about 3.1418.

Much ahead of time Babylonians used the value 3.125 as a ratio of Circumference of Circle to its Diameter. But it was Archimedes who proved that the ratio of the area of a circle to the square of its radius is the same always (constant) but the precise value of this ratio is difficult to calculate. However it can be approximated.

Mathematical experts believe that Pi is known for almost 4000 years. It is also believed that early mathematicians began to use the Greek letter π in the 1700s. The pi symbol was presented by a Welsh mathematician, William Jones in 1706.

Later, the symbol was popularized by the great Swiss-born mathematician Leonhard Euler, in 1737. An 18th-century French mathematician, Georges Buffon, discovered a way to calculate π based on probability.

How Pi Approximation Day is Celebrated?

Pi Approximation Day is observed in a lot of ways such as consuming lots of pie and discussing the importance of the Pi. Also, on this day many institutes, schools and education classes hold contests to find out which student remembers the Pi to its maximum number of decimal places. They also arrange several interesting Pi games that are conducted for the students.

Similarly, you can celebrate Pi Day by baking a pie with a decoration at the top. You can conduct a pie game for your friends, to win the game they have to remember the maximum value of Pi, without the repetition of any pattern. Mathematicians celebrate this day as it is the essential constant of math.

MIT (Massachusetts Institute of Technology) has started an innovative way to celebrate the pi day. Although, Pi Day falls on a date different from Pi approximation Day, it is relevant to highlight the idea of MIT which after all has to do with pi (π). It mails decision involving letters to students’ on pie day sharply at 6:28pm.  As 6:28 is 2x(3:14), the MIT terms it as Tau (𝜏) time and even advocates celebrating tau day on June 28 (6/28).

(I) “Pure mathematics is, in its way, the poetry of logical ideas.”-Albert Einstein
(II) “We cannot hope that many children will learn mathematics unless we find a way to share our enjoyment and show them its beauty as well as its utility.” – Mary Beth
(III) “Mathematics knows no races or geographic boundaries; for mathematics, the cultural world is one country.” – David Hilbert

(IV) “It’s exact and indefinite. It’s like pi- you can keep figuring it out and always be right and never be done.” –  Unknown
(V) “Where there is matter, there is geometry.” – Johannes Kepler (VI) “Pi is not merely the ubiquitous factor in high school geometry problems; it is stitched across the whole tapestry of mathematics, not just geometry’s little corner of it.” –  Unknown

(VII) “Just because we can’t find a solution it doesn’t mean that there isn’t one.”- Andrew Wiles
(VIII) “Errors using inadequate data are much less than those using no data at all.” – Charles Babbage
(IX) “Mathematicians stand on each other’s shoulders.” – Carl Friedrich Gauss

(X) “Mathematicians are like managers – they want improvement without change.” – Edsger Dijkstra
(XI) “What is imagination? … It is a God-like, noble faculty. It renders earth tolerable; it teaches us to live, in the tone of the eternal.”- Ada Lovelace
(XII) “The Great Pyramid, that monument to spirituality that the Agashan Teachers hold in such high esteem, is built according to Pi’s principles.” – William Eisen

Q. What is Meant by Pi Approximation Day?

Ans: Pi Approximation Day is synonymous with 22/7 or 22 July. So, every year, 22 July is a celebration to glorify the mathematical constant pi (π).

Q. What is the Difference between Pi Day & Pi Approximation Day?

Q. Why is the 22nd of July Pi Approximation Day?

Ans: The fraction 22/7 is an approximate value of Pi, and for this reason alone, July 22, is celebrated as Pi approximation Day.

Q. Why is Pi Day Celebrated on March 14?

Ans: March 14, is 3/14 for people who write date in Month/date format. Interestingly, 3/14 involves first three out of Trillion decimal places possible in actual value of pi (π). Hence March 14 is celebrated as Pi Day.