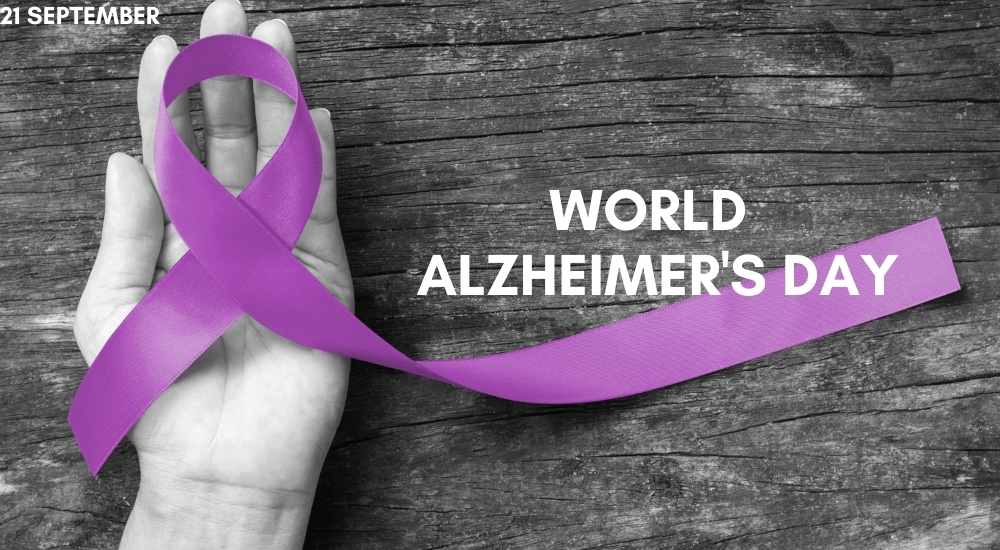 Every year, World Alzheimer’s Day is commemorated on September 21 to generate awareness and educate people about Alzheimer’s disease- the most common form of dementia. In some parts of the world, it is celebrated throughout the month, which is known as World Alzheimer’s Month.

World Alzheimer’s Month is an international campaign. It provides a tool for health organisations across the globe to focus their efforts on bringing awareness about Alzheimer’s disease and highlighting dementia, common symptoms, and risk factors attached to it.

Alzheimer’s disease is a neurodegenerative disease that gradually destroys memory and other essential mental functions such as thinking skills, cognitive skills, and, eventually, the ability to perform the simplest tasks.

Alois Alzheimer was a German psychiatrist, neuropathologist, and Emil Kraepelin’s colleague. He was the first to identify the illness on November 3, 1906, which would later be known as Alzheimer’s. That is the reason why the disorder was named after Alois Alzheimer’s.

The disorder was discovered by a German psychiatrist named Alois. His research was based on the case of Auguste Deter, a 51-year-old lady who had started to exhibit erratic behaviour and memory loss all of a sudden.

With time and alertness about the disease, an organisation called Alzheimer’s Disease International was established in 1984. This organisation is committed to helping to fight Alzheimer’s disease.

It is expected that by the year 2050, 16 million people in the U.S. will have Neurodegenerative. Alzheimer’s is the sixth leading cause of death in the nation. Around the world, it is the 7th worst. Furthermore, the condition causes more disability and illness than any other disease.

An organisation called Alzheimer’s Disease International founded World Alzheimer’s Day to generate awareness and educate people about Alzheimer’s disease- the most common form of dementia and highlight dementia, its common symptoms, and the risk factors attached to it.

The Theme of World Alzheimer’s Day 2022

The theme for World Alzheimer’s Day 2022 is Know dementia, know Alzheimer’s. It is also the theme of Alzheimer’s Awareness Month. It’s the same theme as 2021, but this year it has a unique focus on post-diagnosis support.

How To Celebrate Alzheimer’s Day?

If you want, put on a purple bracelet or ribbon to mark World Alzheimer’s Month. Participate in a walk or other event in your neighbourhood to raise awareness. Contribute to the Alzheimer’s Association or the International Alzheimer’s Organization (ADI).

Even more Important is to commit to stay mentally & socially active that prevents dementia and Alzheimers. If you can spread the word on how to prevent it, nothing like it. Research suggest that: Reading everyday, Learning foreign languages, engaging yourself in community work etc. can prevent alzheimer to occur.

(I) “Release in your mind whom your loved one used to be and accept who they are today.” – J. Rusnak, PhD
(II) “Dementia care—it’s not rocket science, it’s heart science.” – Gail Weatherill, RN
(III) “Please remember the real me when I cannot remember you.” – Julie White

(IV) “Be kind for everyone you meet is fighting a hard battle.” – Socrates
(V) “Even If I can’t cure, I can still care.” – Sally P. Karioth RN, PhD
(VI) “Forgetting past memories doesn’t mean that you were not a part of it. You build those memories and your loved ones know it well.” – Caroline Lee

(VII) “I am seeking, I am not lost. I am forgetful, I am not gone.” – Koenig Coste
(VIII) “You have to be patient with Alzheimer’s. Once you understand that it’s a medical condition, you become a little more compassionate. You get less frustrated.” – Kim Campbell
(IX) Our value lies in what we are and what we have been, not in our ability to recite the recent past.” – Homer

(X) “If you want to avoid Alzheimer’s disease, sleep eight hours a night.” – Deepak Chopra
(XI) “There is a fountain of youth: It’s in your mind, your talents, the creativity you brought into your life, and the lives of people you loved” – Sophia Loren
(XII) “Alzheimer’s caregivers are heroes.” – Leeza Gibbons

(XIII) “You only know yourself because of your memories.” – Andrea Gillies
(XIV) “I like it when people remember that I’m a person, not just a person with Alzheimer’s.” – Sally Hepworth
(XV) “I intend to live the remainder of the years God gives me on this earth doing the things I have always done.” – Ronald Reagan

Alzheimer’s disease is the most common form of dementia diagnosed among older adults. And Memory loss and confusion are the main symptoms of it. Between 60 and 80 per cent of cases of dementia are caused by this disease.

By nature Alzheimer is a neurodegenerative which destroys your memory slowly. It impairs other mental functions crucial to your well being too. The disruptions include thinking skills, cognitive skills, and, eventually, the ability to perform the simplest of tasks.

Losing memory and getting incapable of doing your daily chores is the biggest of life. And, strangely the number of affected people is simply growing. Healthy diets, smoke free & alcohol free lifestyle, daily workouts, active social life, engaging in learning new skills can come a long way in averting the alzheimers.

As per reports the cardiovascular diseases have strong correlation with Dementia & alzheimers. So, anything that can cause cardiovascular issues has to be avoided. The day allows you to reflect on your daily activity, and spread the message for keeping alzheimer at bay.

Q. Why do we celebrate World Alzheimer’s day?