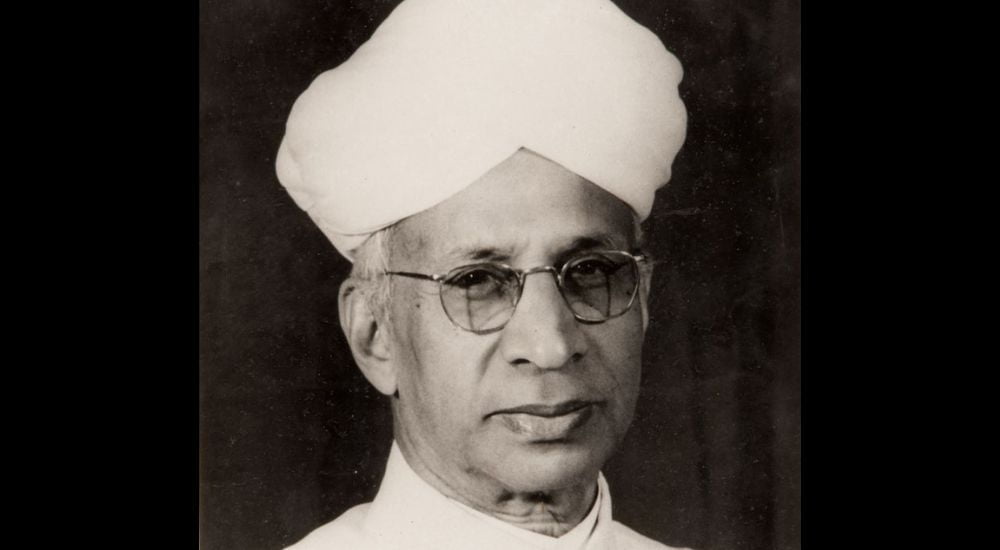 He was a good Philosopher, who backed Hindutva in its present form. His aim was to show the intellectual and ethical viability of Hinduism. He had a significant impact on changing, how Hinduism is understood in both India and the west.

Some of his well-known works in writing are “The Philosophy of Upanishad,” “East and West: Some Reflections,” and “Eastern Religion and Western Thought”. Radhakrishnan got many great Awards in his lifetime, including a knighthood in 1931, the Bharat Ratna, India’s highest civilian award, in 1954, and honorary membership in the British Royal Order of Merit in 1963.

He was also one of the founders of Helpage India, a nonprofit organization that helps the country’s aged and less fortunate. Every year on September 5, we celebrate Teacher’s day to honour him.

Dr. Sarvepalli Radhakrishnan was born on September 5, 1888, in a Telugu-speaking Niyogi Brahmin family to Sarvepalli Veeraswami and Sita (Sitamma). He was born in Tiruttani, Madras Presidency, British India which is present-day Tamil Nadu, India. His father worked for a local zamindar as a subordinate revenue official (local landlord).

Radhakrishnan was raised in the towns of Tirupati and Thiruttani. He completed his elementary education at Thiruttani’s K.V. High School. For his higher studies, he enrolled at Vellore’s Voorhees College. At the age of 17, after finishing First of Arts, he enrolled in Madras Christian College.

At the age of 16, Sarvepalli wed Sivakamu. Over 51 years of Radhakrishnan and Sivakamu’s marriage were spent in bliss. They had five daughters and one son. His son, Sarvepalli Gopal, was a well-known historian in India. Both the biography of Jawaharlal Nehru and Sarvepalli Radhakrishnan was written by Gopal.

Sarvepalli Radhakrishnan started his studies in the Philosophy Department at Madras Presidency College in 1909. Later, he transferred to the University of Mysore in 1918 and worked at Maharaja College. He accepted the King George V Chair of Mental and Moral Science at the University of Calcutta when it was offered to him in 1921.

As a famous academician, he was asked to give the Hibbert Lecture on the Ideals of Life at Harris Manchester College, Oxford, in 1929. From 1939 to 1948, he served as a professor of Eastern religions and ethics at the University of Oxford in England.

Later in his life, Radhakrishnan began his political career, after a great career in academics. His reputation on the world stage came before his political career. In 1928, he attended the Andhra Mahasabha, where he favored the idea of renaming the Ceded Districts division of the Madras Presidency Rayalaseema.

He was appointed to the League of Nations Committee for Intellectual Cooperation in 1931, where he rose to prominence as a Hindu authority on Indian thought and a persuasive interpreter of the role of Eastern institutions in modern society in the eyes of the West.

In the years following India’s independence, Radhakrishnan became increasingly involved in both domestic and international politics. He represented India in the UNESCO from 1946 to 1952. In the two years that followed India’s independence, he also served in the Indian Constituent Assembly.

Radhakrishnan had to strike a compromise between the demands of the University Commission and his ongoing duties as the Spalding Professor at Oxford and his obligations to UNESCO and the Constituent Assembly.

When the Universities Commission’s report was finished in 1949, Radhakrishnan was chosen to serve as India’s ambassador to Moscow by Jawaharlal Nehru. At that time Nehru was the prime minister of India.

Radhakrishnan kept this position until 1952. He was able to put his philosophical and political convictions into action when he was elected to the Rajya Sabha. In 1952, Radhakrishnan was appointed as India’s first vice president. From 1962 to 1967, he served as the country’s second president.

By defending Hinduism against misinformed Western criticism and embracing Western intellectual and religious ideas, Radhakrishnan worked to bring eastern and western thought together. He was one of Neo-most Vedanta’s influential spokesmen.

Advaita Vedanta served as the foundation of his metaphysics, which he reinterpreted for a contemporary audience. He was aware of the goodness and variety of human nature, which he believed to be supported by and founded in the ultimate, or Brahman.

Radhakrishnan believed that Advaita Vedanta, which is founded on intuition, was the best representation of Hinduism when compared to the cognitively mediated ideas of other religions. Radhakrishnan believes that Vedanta is the highest form of religion due to the fact that it offers the most immediate intuitive experience and inner realization.

In 1918, Radhakrishnan published his first book, which was a philosophy of Rabindranath Tagore. In 1923, he wrote “Indian Philosophy”, his second work. The third book of Radhakrishnan was “The Hindu View of Life”, published in 1926 dealt with Hindu philosophy and beliefs.

In 1929, “An Idealist View of Life” was released. The same year, “Kalki” or “the Future of Civilization” was published. In the year of 1939, he released his sixth book, titled “Eastern Religions and Western Thought”. In 1947, he released his 8th book “Religion and Society”.

The Bhagavadgita was released in 1948 and included a preface, Sanskrit text, an English translation, and notes. Later in his lifetime, he published many books.

In 1931, King George V knighted him for his contributions to education. He was chosen as a Fellow of the British Academy in 1938. In 1954, Radhakrishnan received the highest civilian award in India, the Bharat Ratna. The same year, Germany recognized him by awarding him the Pour le Mérite for Sciences and Arts.

The United Kingdom bestowed upon him the honour of membership in the Order of Merit in 1963. He received a record-breaking 27 nominations for the Nobel Prize. 11 times for the Nobel Peace Prize and 16 times in literature.

How and When did Dr. Sarvepalli Radhakrishnan Die?

On November 26, 1956, Radha Krishnan’s Sivakamu passed away. He was a widower until his death and never got married again. Radhakrishnan retired from public life in 1967. He lived in the home he created at Mylapore, Madras, during the final eight years of his life. In 1975, Radhakrishnan passed away on April 17.

Q. Why is Radhakrishnan birthday celebrated as teachers Day?

Ans: We celebrate Teacher’s Day on September 5 as a tribute to the contribution made by teachers to society. And, we all know that Radhakrishnan was also a teacher.

Q. How did Radhakrishnan die?

Ans: He died due to Heart failure.

Q. Where was Radhakrishna born?

Ans: He was born in Tiruttani, a town in Tiruvallur district in the state of Tamil Nadu, India.

Beyond Sarvepalli Radhakrishnan Under Inspiration Reads