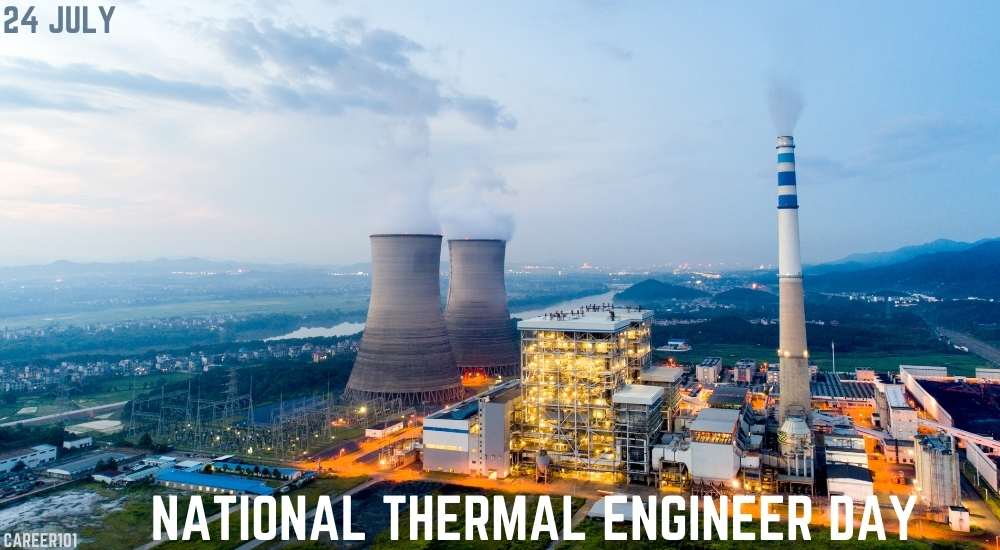 National Thermal Engineer Day is celebrated every year on July 24th to recognize the hard work and dedication of thermal engineers and to thank and appreciate all of them. 24 July has been chosen to observe the National Thermal engineer day because this day is one of the hottest days of the year in the northern hemisphere.

Thermal energy also called heat energy is produced when a rise in temperature causes atoms and molecules to move faster and collide with each other. Thermodynamics is a whole branch of physics, that deals with how heat is transferred between various systems and how is work done in the process.

What is National Thermal Engineer Day?

National Thermal Engineer Day is a holiday that is celebrated every year on July 24th to thank and appreciate all thermal engineers in the country. Thermal engineers deal with the planning and design of heating and cooling systems. In straight words, they use thermodynamics to build systems that transfer heat or energy.

Thermal Engineer Day is committed to raising awareness among the general public about thermal engineers and their contribution to development. And, this day honours the significance of thermal management in the electronics industry and the engineers and businesses who make it possible.

It is widely known as, thermal energy is discovered by English physicist, mathematician, and brewer James Prescott Joule. Joule was born on December 24, 1818, in Salford, Lancashire (now in Greater Manchester). Suppositionally, he was experimenting with fluids and, while forcing a fluid by mechanical means to flow in a vessel.

James Prescott Joule found that its temperature had increased. After collaborating with his team on a mechanical float, he measured that the heat had been transferred. Later, he successfully converted mechanical energy to thermal energy.

National Thermal Engineer Day was established in July 2014 by an American engineering and manufacturing company, Advanced Thermal Solutions, Inc. (ATS). They wanted to create awareness about thermal engineers and to appreciate their contribution to the electronics and engineering industry.

Thermal energy is responsible for all the gadgets we are using today. Without thermal energy, the various high-tech capabilities of electronics would be meaningless and useless. Thermal engineers are one of the greatest contributors to the growth of the country.

How is Thermal Engineer Day Celebrated?

This Thermal Engineer Day can be celebrated in too many different ways. But these two ways are very respectable. The first way is you can thank a thermal engineer for all that they do, if you happen to know any thermal engineers it’s okay, if you don’t you can do it through social media using the hashtag #NationalThermalEngineerDay. And, another way you can celebrate this day is by reading some books about thermal engineers and watching the biography of James Prescott Joule.

(I) “There’s nothing I believe in more strongly than getting young people interested in science and engineering, for a better tomorrow, for all humankind.”- Bill Nye
(II) “Science is about knowing; engineering is about doing.”- Henry Petroski
(III) “Teaching thermal physics is as easy as teaching a song, you think you make it simpler when you make it slightly wrong.” – Mark Zemansky

(IV) “Engineering stimulates the mind.”- Bruce Dickinson
(V) “The thermal agency by which mechanical effect may be obtained is the transference of heat from one body to another at a lower temperature.” – Sadi Carnot (VI) “Science is beautiful when it makes simple explanations of phenomena or connections between different observations. Examples include the double helix in biology and the fundamental equations of physics.”- Stephen Hawking

(VII) “What we usually consider as impossible are simply engineering problems… there’s no law of physics preventing them.” – Michio Kaku
(VIII) “The scientist discovers a new type of material or energy and the engineer discovers a new use for it.” – Gordon Lindsay Glegg

(IX) “Engineers Like to Solve Problems. If There Are No Problems Handily Available, They Will Create Their Own Problems.” – Scott Adams
(X) “The engineer has been, and is, a maker of history.” – James Kip Finch
(XI) “Science can amuse and fascinate us all, but it is engineering that changes the world.” – Isaac Asimov

(XII) “Physics is about questioning, studying, probing nature. You probe, and, if you’re lucky, you get strange clues.”- Lene Hau
(XIII) “Architecture Begins Where Engineering Ends.” – Walter Gropius
(XV) “At its heart, engineering is about using science to find creative, practical solutions. It is a noble profession.” – Queen Elizabeth II

(XIV) “The ideal engineer is a composite … He is not a scientist, he is not a mathematician, he is not a sociologist or a writer, but he may use the knowledge and techniques of any or all of these disciplines in solving engineering problems.” – Nathan W. Dougherty

Q. What is thermal engineer day?

Ans: Thermal Engineer Day is a holiday that is celebrated every year on July 24th to recognize the hard work and dedication of thermal engineers and to thank and appreciate all of them.

Q. What does a thermal engineer do?

Ans: Thermal engineers deal with the planning and design of heating and cooling systems. In straight words, they use thermodynamics to build systems that transfer heat or energy.

Q. How do I become a thermal engineer?

Ans: Minimum educational qualification of 10+2 with PCM is required to apply for the B.Tech/B.E. course. 50% of qualifying marks are required for the general candidates and 45% for SC/ST students.

Q. What degree do you need to be in thermal engineering?