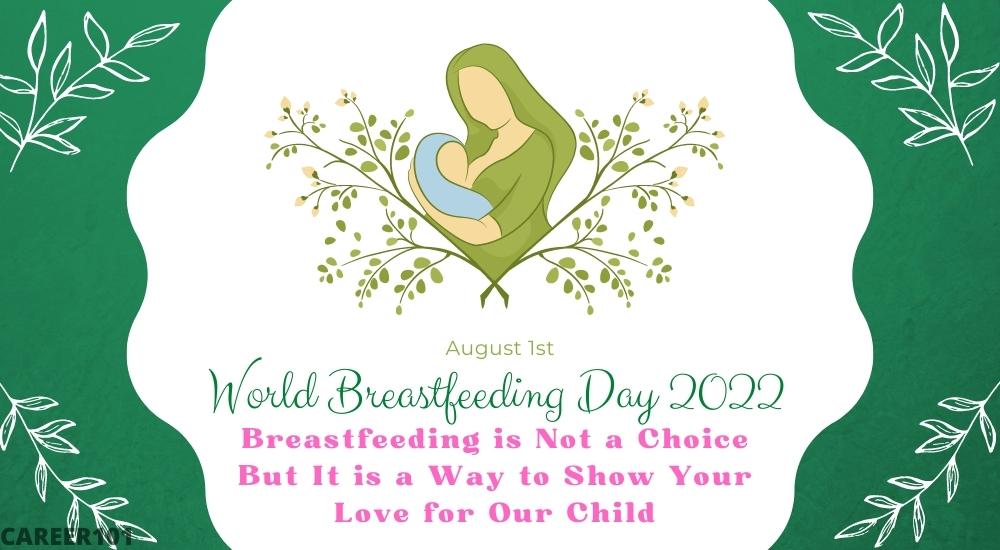 This annually launches WBW campaign come up with themes that are aligned with breastfeeding and good nutrition, food security and reduction of inequalities. The theme of WBW 2022 is “Step Up For Breastfeeding: Educate and Support.” This World Breastfeeding Week, let’s join and promote & support the breast feeding.

What is World Breastfeeding Week 2022?

World Breastfeeding Week, proposed by World Health Organization, is a week observed internationally from August 1 to August 7 in order to make aware of the disadvantages usually the child and of course, mother faces because of not breastfeeding the newborn child. In totality, this day particularly highlights the benefits of breastfeeding women and their children obtain from participating in breastfeeding.

The week is celebrated across at least 170 countries, making women aware of the benefits a child gets from his mother’s milk. For the unversed, having consumed mother milk will be stronger and less vulnerable to diseases than those who do not consume mother milk.

Why is Breastfeeding Important?

The mother’s milk has extraordinary benefits for the newborn child. According to some Greek mythology, it is said that Hercules was invincible because he was breastfed by Hera.

Apart from taking instances from mythology, it has a lot of significance in building and shaping children’s health. After having the milk from the mother’s breast, the children can in-build an immune system to fight against several chronic and acute diseases or ailments.

Talking the same, diabetes, obesity, and asthma, pneumonia, among others, are the issues or infections which a child overcome easily. Not only does a child gets benefitted from breastfeeding, but mothers who feed the child also save themselves from several chronic and acute diseases. Some of them include lowering the risk of breast and ovarian cancer, mothers’ uterus contract, stopping bleeding more quickly after delivery and eventually promoting a strong bond between mothers and their children.

Considering the benefits of Breast Feeding, the WABA organizes a World Breastfeeding Week campaign every year in the month of August to help women know about the significance of breastfeeding. It is always advised to the new or to-be mothers to feed children milk from their breasts until they turn two years old.

The given below are some of the benefits of Breastfeeding:

(a) Those who have been breastfed will have a strong natural immune system than the children who are not. It is so because the mother’s milk contains immunoglobulins (mostly IgA) that cater all-important anti-infective protection to the baby.

(c) Breastfeeding is a good source of nutrition for infants and is also easily digestible.

(d) Breastfeeding also helps in making the bond stronger between children and mothers.

(e) It plays a crucial role in the sustainable development (SDGs) for infants.

(f) Mothers can nurse anywhere and anytime: Without having to prepare bottles or mix formula, mothers may feed their infants on the go.

The reputed world institutions come into action after taking into cognizance of high rates of bottle-feeding and the value of breastfeeding for mothers as well as children. For the unversed, till the twentieth century, the prevalence of abandoning breastfeeding had gone higher and to lower, requiring breastfeeding promotion and awareness among mothers, families, and groups.

In the early twentieth century, certain groups and institutions exclusively started to promote the benefits & values of breastfeeding in women, infants, and children programs, though they gained minuscule success.

Since newly and to-be mothers had significantly leaned towards Formula milk to feed their children despite of breastfeeding promotion movement, the international institutions came up with a decision to observe a day to spread the benefits of breastfeeding.

In order to promote, support, and protect breastfeeding, WHO and UNICEF made the Innocenti Declaration in August 1990. World Health Organization recommends that infants should be exclusively breastfed for the first six months of life to achieve optimal health and development. One year later, the World Alliance of Breastfeeding Action was established to carry out the initiative of the World Health Organization and UNICEF.

For the uninitiated, only a day was proposed for the WBW campaigns and disseminating the benefits of breastfeeding for the children as well as mothers. However, with the course, World Breastfeeding Week is started to celebrate for one week from August 1 to August 7.

Mothers who do breastfeeding not only help in the growth of children but also catering better health for themselves. In fact, the actors of WBW campaigns disseminate such things to the world and, more specifically, women.

Talking about its advantages, reducing infant mortality, enhancing the immune system, working in mental development, Sudden Infant Death Syndrome, etc. are some of the blessings of breastfeeding for children. Apart from this, breastfeeding also stimulates the mother’s uterus to contract and return to normal size, reduces bleeding after delivery, and reduces the chance of anemia, among others.

Mentioned below are numerous inspiring quotes for World Breastfeeding Week:

(I) “No one could give her such soothing and sensible consolation as this little three-month-old creature when he lay at her breast and she felt the movement of his lips and the snuffling of his tiny nose.” — Leo Tolstoy

(II) I make something that kills Cancer!
(III) ”My body, my life, became the landscape of my son’s life. I am no longer merely a thing living in the world; I am a world.” — Sarah Manguso
(IV) Breastfeeding: 100% environmentally friendly

(V) “Breastfeeding is a mother’s gift to herself, her baby, and the earth.” — Pamela K. Wiggins
(VI) It’s time to go back to our roots, go back to breastfeeding.
(VII) “There is no substitute for mother’s milk.” – Martin H. Fischer

(VIII) “Mother’s milk is soul food for babies.” — Ina May Gaskin
(IX) “It’s an amazing bond with your child. Some cultures do it up to five years, normally. I thought, ’Well, I’ll just do it as long as it feels right for my son.” — Kelly Rutherford

(X) “Bottles fill his stomach, but breastfeeding fills his soul.” — Diane Wiessinger
(XI) “Mother’s milk, developed through evolution with thousands of ingredients to build the human brain, body and immune system, is incomparable with a man-made product of a couple dozen ingredients that are non-human and in wrong proportions.” — Darcia Narvaez, Ph.D.

(XII) “Mother’s milk, time-tested for millions of years, is the best nutrient for babies because it is nature’s perfect food.” — Robert S. Mendelsohn
(XIII) “The moment she had laid the child to the breast both became perfectly calm.” — Isak Dinesen

Quotes For Mothers Who Are Avoiding Breastfeeding

Here are some sensible and heart-touching quotes for those mothers who avoid Breastfeeding:

(d) It’s not about my right to breastfeed, it’s about my child’s right to eat.
(e) “Nursing does not diminish the beauty of a woman’s breasts; it enhances their charm by making them look lived in and happy.” — Robert A. Heinlein

(g) “Thinking that baby formula is as good as breast milk is believing that thirty years of technology is superior to three million years of nature’s evolution.” — Christine Northrup
(h) “…the idea of bottle feeding just to ‘involve the father’ is one more instance of preserving the status quo at a price to the baby.” — Marni Jackson, The Mother Zone

The WBW is celebrated every year with specific themes. The theme for World Breastfeeding Week 2022 is “Step Up For Breastfeeding: Educate and Support.” Here are the themes, WBW have opted to celebrate around the world.

How to Celebrate World Breastfeeding Week?

The objective of WBW, or World Breastfeeding Week, is to enhance the health & development of mothers & babies. So you can be a part of the breastfeeding campaigns and programs organized by WABA and encourage women by offering knowledge & information about the benefits of breastfeeding.

Your activities for breastfeeding can get recognition if you took a pledge to participate in the #WBW2022 celebration and filled out the pledge form. More so, you can share your initiatives in social media with a tag like #WBW2022 #WABA #stepupforbreastfeeding #educateandsupport #breastfeeding #SDGs #worldbreastfeedingweek2022 #buildingbackbetter #WarmChain.

Q. What was the theme of World Breastfeeding Week 2021?

Q. Why do we celebrate World Breastfeeding Week?

Ans- Celebrating World Breastfeeding Week is an initiative to encourage women globally to feed children from their breasts so that children can intake nutrition, protein, and antibodies for their well-being and growth.

Q. Which is the World Breastfeeding Week?

Ans- World Breastfeeding Week is an annual campaign established to bring awareness among the people about the benefits of breastfeeding children, and mothers get.

Q. What is the theme for Breastfeeding Week 2022?

Beyond WBW 2022 Under Awareness Posts Reads