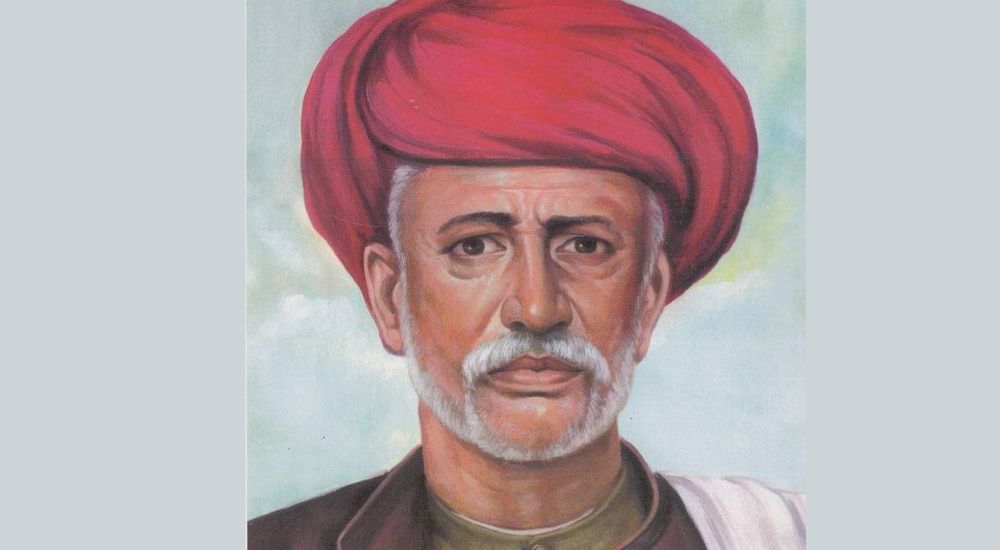 He brought many social reforms, including the destruction of untouchability and the caste system from society, and educating people of oppressed castes.

He and his wife, Savitribai Phule, were the forerunner in providing and promoting education for women in India.

In 1848, Phule started the first school for girls in Pune at Tatyasaheb Bhide’s residence. In order to attain equal rights for the people of oppressed castes, he founded Satyasodhak Samaj with the aid of his supporters.

The group was opened for everyone to join, and work for the upliftment of lower castes. In Maharashtra, Phule is considered a key figure in the social reform movement.

Jyotirao was born in 1827 in Pune to Govindrao and Chimnabai. He was named after God Jyotiba because he was born on the day of Jyotiba’s annual fair.

Jyotirao belonged to the Mali caste family, who used to work as a fruit and vegetable grower to earn a living.

Malis was socially disliked by Brahmins because they were seen as belonging to a lower caste. The family adopted the name “Phule” as a result of Jyotirao’s father and uncles working as florists.

He lost His mother when he was just 9 months old. Jyotirao was kicked out of school after attending primary school to study the fundamentals of reading, writing, and math because his family was very poor.

Despite, he was very intelligent and good at studies, he dropped his studies and went to work in the shop and on the farm along with his family.

But a fellow member of Phule’s Mali caste saw his ability and convinced his father to let him enroll in the neighborhood Scottish Mission High School.

He completed his primary education through an English medium school in 1847. Since child marriage was a tradition during his childhood, his father chose a girl from his own clan for him to marry. He married at age of 13.

In 1848, he attended the wedding of a Brahmin friend, where he witnessed something that completely changed his life.

At the wedding, his friend’s parents scolded and humiliated him, when they came to know about his origins. He left the ceremony but was very upset.

This incident set Jyotiba’s fight against caste prejudice in action and ignited a social revolution in Indian society.

He made it his life’s mission to relentlessly push against social majoritarian dominance and worked toward the emancipation of all people who were affected by this social injustice.

Thomas Paine’s beliefs had a big impact on Jyotirao after reading his well-known book, “The Rights of Man”. He thought that the best way to address social ills was to educate women and members of lower castes.

In 1848, after reading Thomas Paine’s book, a sense of social injustice developed inside him. He understood that women and exploited castes were at a disadvantage in Indian society and that educating these groups was essential to achieving their rights.

The first thing he did was educate his wife, Savitribai, on how to read and write. Further, in 1851, both couples started a school for girls in Pune.

He also taught his maternal aunt’s daughter, Sagunabai Kshirsagar to write Marathi. Later, they established two more schools for members of the lower castes, namely the Mahars and Mangs.

In the patriarchal society of his era, women’s status was terrible. Female infanticide and child marriage were both common practices.

Sometimes, kids occasionally become married to much older guys. Before they reached puberty, many of these girls were widowed. And, no one used to support those unfortunate souls.

After realizing the miserable conditions faced by widows, Jyotiba founded an ashram in 1854 for young widows to protect these miserable people from dying at the merciless hands of society and finally came to support the concept of widow remarriage.

Efforts Towards Elimination of Caste Discrimination

The traditional Brahmins and other upper castes were criticized by Jyotirao and described as “hypocrites.” He ran an anti-authoritarian campaign and encouraged the “peasants” and “proletariat” to resist the limitations placed on them.

His home was open to everyone, irrespective of caste and religion. He was a staunch supporter of gender equality.

To show his belief in gender equality, he involved his wife in all of his social reform initiatives. He thought that the Brahmin used religious symbols like Rama as a tool to oppress the lower caste, particularly the Hindus.

The society’s traditional Brahmins were angry at Jyotirao’s actions. They accused him of corrupting societal rules and regulations. He was blamed for representing the Christian Missionaries by many.

However, Jyotirao was resolute and chose to carry on the movement. It’s interesting to note that Jyotirao had several Brahmin acquaintances who contributed to the movement’s success.

Phule founded Satyashodhak Samaj on September 24, 1873, to focus on the rights of oppressed groups like women, Shudras, and Dalits.

He condemned idolatry and criticized the caste system with this samaj. The Satyashodhak Samaj opposed the need for priests and advocated for the advancement of logic.

Phule founded Satyashodhak Samaj with the goals of promoting the enjoyment, well-being, equality, and simplicity of religious practices for all people.

The Deenbandhu newspaper, published in Pune, gave the Samaj’s viewpoints a voice. Government officials, Brahmins, and Muslims all belonged to the samaj.

The organization’s top executives and financial backers came from Phule’s own Mali caste. According to some documented accounts, they even encouraged Jews to join the Samaj.

By 1876, the “Satya Shodhak Samaj” had 316 members. Jyotirao made the decision to build a communal bathing tank outside his home in 1868 to demonstrate his tolerant attitude toward all people and his desire to eat with anyone, regardless of caste.

How and When did Jyotirao Phule Die?

Jyotiba Phule spent his entire life working to free the untouchables from Brahmins’ oppression. He was not just a social reformer and activist, but also a successful businessman.

He worked for the Municipal Corporation as a contractor and cultivator as well. Between 1876 and 1883, he was the Poona Municipality’s Commissioner.

Q. Who gave the Mahatma title to Jyotiba?

Q. Which is the Most Famous Work of Jyotirao Phule?

Ans: Phule founded Satyashodhak Samaj on September 24, 1873, to focus on the rights of oppressed groups like women, Shudras, and Dalits.

Q. Who was the Wife of Jyotirao Phule?

Beyond Jyotiba Bio Under Inspiration Reads