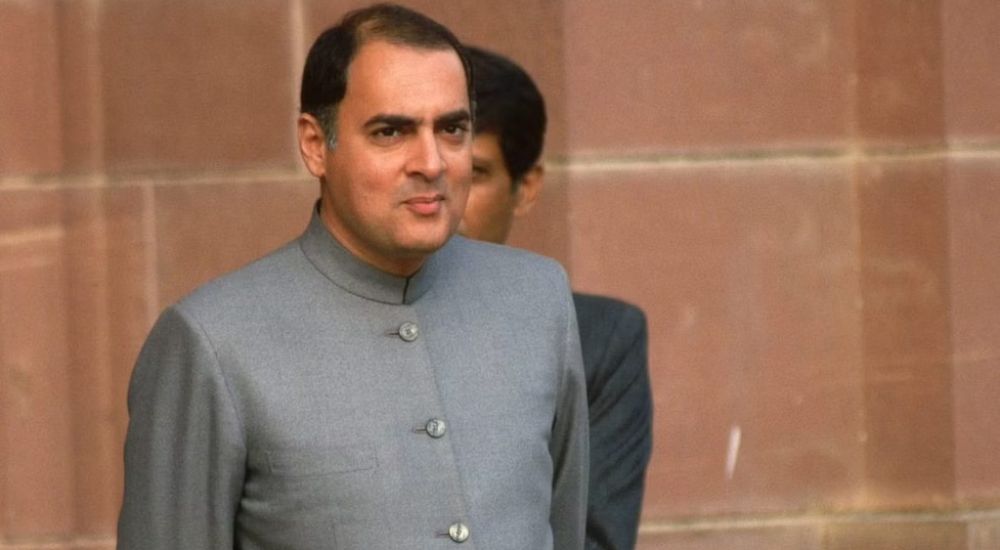 Rajiv Gandhi was an Indian Politician, who was born into a political family. He became the 3rd prime minister of India from his family after his mother, Smt. Indira Gandhi, and his maternal grandfather, Pandit Jawaharlal Nehru.

He took the office of prime minister after his mother’s demise and became the youngest Indian Prime minister at the age of 40. He started a number of development initiatives, such as reforming the country’s educational system and significantly growing the telecom industry.

Because of his suspected involvement in the Bofors scandal, which included 640 million rupees, Rajiv Gandhi has also become one of India’s more controversial Prime Ministers. He was unexpectedly killed by the LTTE in Sriperambudur in 1991 due to his aggressive efforts to suppress the group in Sri Lanka. In 1991, he received the Bharat Ratna, the highest civilian honour in India, posthumously.

Rajiv was born on August 20, 1944, in Bombay to Indira and Feroze Gandhi. He and his younger brother, Sanjay were admitted to Shiv Niketan school, where they completed their elementary education.

His school’s teachers said about him “Rajiv was a shy and introvert kind of child, who was very good at painting and drawing”.  For further studies, he was admitted to Doon School, Dehradun in 1954. His brother joined him 2 years later.

In 1961, Rajiv was sent to London to study A-levels. He was also educated at an international boarding school in Switzerland, the Ecole D’Humanité. He studied engineering at Trinity College in Cambridge from 1962 to 1965, but he didn’t earn the degree.

Again in 1966, he enrolled in a course in mechanical engineering at Imperial College London but didn’t finish it either. Later, Rajiv came to know that he was not studious enough. In 1966, his mother became the president of India, so he returned to India.

Rajiv moved to Delhi and joined the Flying Club, a not-for-profit, member-run organization that provides its members with affordable access to aircraft. He got training there and became a pilot in 1971. His brother, Sanjay was involved in Politics but Rajiv did not show any interest in joining politics.

After 3 years of relationship, Rajiv married Edvige Antonia Albina Màino in 1968. His wife changed her name to Sonia Gandhi and relocated to India permanently. Rahul Gandhi was born as their first child and Priyanka Gandhi as the second.

How and When did Rajiv Enter Politics

Unexpectedly on June 23, 1980, Rajiv’s Younger brother died in an aeroplane crash. After hearing the sad news, Rajiv returned from London to India and cremated Sanjay’s body. Shankaracharya Swami Shri Swaroopanand, a saint from Badrinath, visited the family’s house to offer his condolences.

Swami Swaroopanand suggested Rajiv stay in India instead of going abroad and dedicate himself to serving the nation. To include Rajiv in politics, 70 members of the Congress party signed a proposal and went to Indira.

In response to the proposal, Indira Gandhi replied that she can’t force Rajiv to enter politics, it was his decision whether to join in or exit from politics. When questioned about it, he replied, “If my mother gets help from it, then I will enter politics”.

The need of time, forced him to enter politics. On February 16, 1981, Rajiv joined politics, when he addressed a national farmers’ day rally in Delhi. At the time of his political debut, he was still working at Air India as an employee.

How did Rajiv Gandhi Become the Prime Minister of India?

The All India Congress Committee met on May 4, 1981, and Indira Gandhi served as its head. In the meeting, Rajiv’s candidacy for the Amethi constituency was proposed by Vasantdada Patil, and it was approved by every participant.

His candidacy for the constituency was officially announced a week later by the Party. He won the seat by out-competing Lok Dal contender Sharad Yadav by a margin of 237,000 votes. On August 17, he took his oath to serve as a member of parliament.

His organizational ability was first observed during the 1982 Asian Games. According to sports historian, Boria Majumdar said; being the son of the prime minister, he had a moral and unofficial power over the other 33 members of the Indian parliament, who served on the organizing committee for the Games.

On the day when his mother was assassinated by two of her own Sikh bodyguards in retaliation for Operation Blue Star, Rajiv took on the role of Prime Minister. The very first thing that Rajiv did after becoming the prime minister passed the Anti defection Law in January 1985.

According to the Anti defection law, any MP or MLA could not join any other political party until the next election. Historian Manish Telikicherla Chary describes it as a method to prevent corruption and bribery of ministers.

Although his 1984 election manifesto made no mention of economic policy, he still tried to liberalise the country’s economy and began offering incentives to make the private industry successful.

He began providing corporate businesses with subsidies in order to boost industrial production, particularly of durable items. Members of his own party criticized these actions, calling them “pro-rich” and “pro-city reforms”.

How Did Rajiv Gandhi Die?

In 1987, Rajiv almost died in a gunshot by a Sri Lankan guard. This incident took place on July 30, 1987, when he went to Sri Lanka and signed the Indo-Sri Lanka Accord, an honour guard, Vijitha Rohana fired on Rajiv. Luckily, the bullet missed his head due to his quick reflexes.

After the apprehension of the guard, he was asked about the incident, and he replied that his intention was to kill Rajiv Gandhi because of the damage he had caused to Sri Lanka. Later, Rajiv narrated the incident by himself, he said;

“When I was inspecting the guard of honour and as I walked past one person, I saw through the corner of my eye some movement. I ducked down a little bit in a reflex action. By my ducking, he missed my head and the brunt of the blow came on my shoulder below the left ear.”

The last time when India listened to his voice was in May 1991. At that time, he was at Sriperumbudur, a village approximately 40 km from Chennai. While campaigning for the Sriperumbudur Lok Sabha Congress candidate, he was killed.

The explosion killed almost 16 people including Rajiv Gandhi and Rajaratnam. All these incidents were captured by a 21-year-old local photographer.

Q. How Did Rajiv Gandhi Die?

Ans: He was assassinated by a woman named Thenmozhi Rajaratnam, a member of the Liberation Tigers of Tamil Eelam.

Q. Where Was Rajiv Gandhi Born?

Ans: He was born in Mumbai.

Q. Who is Rajiv Gandhi’s Wife?

Q. Who is Rajiv Gandhi’s Son?

Beyond Rajiv Gandhi Under Awareness Reads